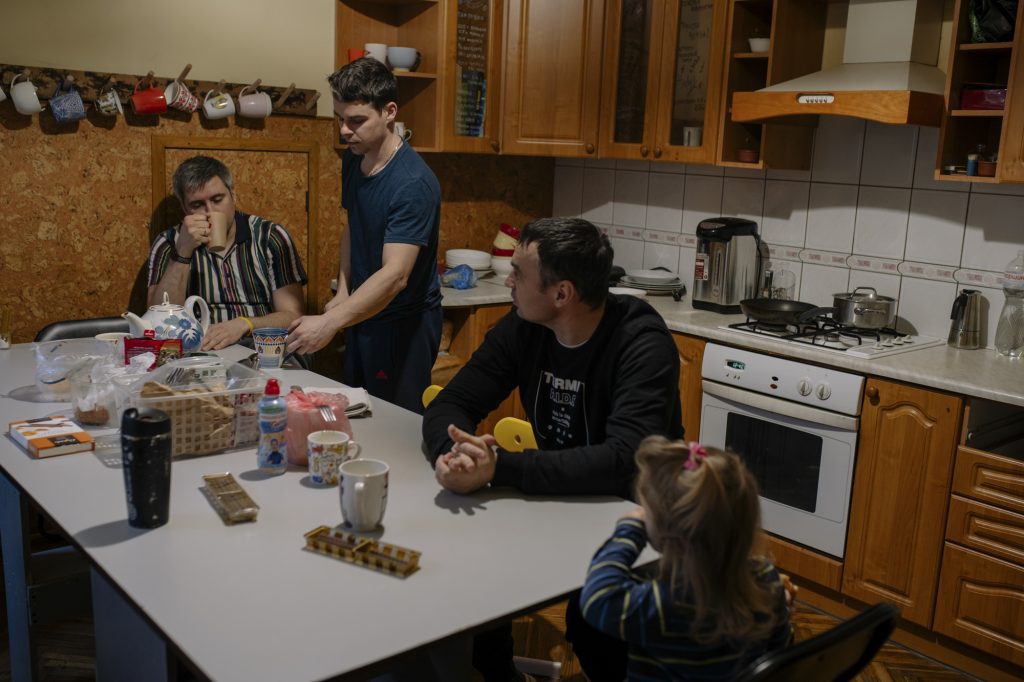 More than a quarter of Ukraine’s population has left their homes since the start of the Russian invasion. Some of them went abroad, and most of them moved to safer regions of Ukraine. Internally displaced people lodged in their friends’ and relatives’ houses, or rented an apartment when there had been free spaces for rent. Many people live in temporary shelters. This article tells about one such shelter.

It’s hard to imagine seeing your house turned into a black hole by the occupiers’ munitions. On the other hand, if you can look at such a picture, in the worst moment you have been in a basement or far away from home, in a relatively safe place. You say to yourself: “It’s good I am alive”. And your friends tell you the same. Yes, it’s good. But how can one fill the black hole that grows inside you, when an enemy destroys your house with one or two blasts?

Many of those who left are “lucky”. They can call the neighbors who stayed, and the latter would say: “Your house is unhurt, for now”. It’s alright. Neighbors or relatives pick up the phone. They are alive. They say your house is intact. Good news. You’ve got luck. Those who’ve got more luck and those who’ve got less, all hope to come back soon.

What strikes the most is the answer to a question “Where do you come from?”. Displaced people say: “We live in Kharkiv, district such-and-such”, “We live in Kyiv, such-and-such street”. They don’t say “We’ve left Kyiv” or “Our apartment is in Kyiv”, but only “We live in Kyiv” in the present time. And this is said by people who have been living in a shelter in Ivano-Frankivsk for more than a month.

This is painful. People are coming from the areas under heavy shelling, with the war behind their window, in the courtyard, in the basement, in the shopping mall that is no more. The war is in the sirens’ sounds and blasts’ noise nearby. That’s why these people are currently in Lviv, Ivano-Frankivsk, or Ternopil. They have to live somehow in the new places too. And nobody knows for how long. 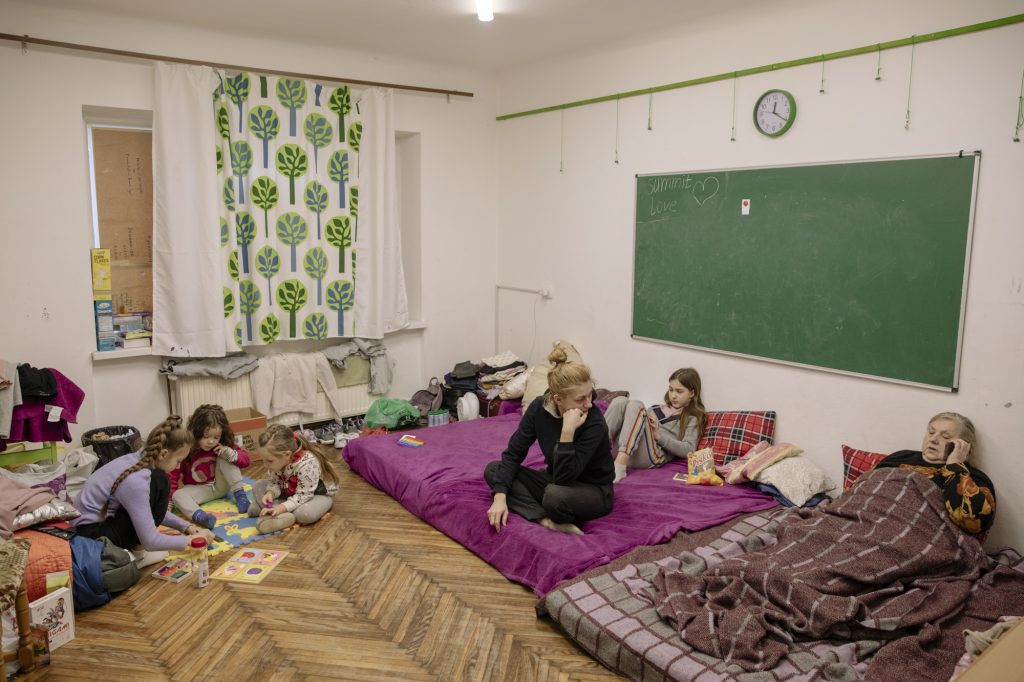 When my friends post on social networks trying to find accommodation for people who have fled the war zone, they usually start with these words: “I know this is nearly impossible, but I’m looking for an apartment for people in need…”. Flats for rent are almost over in Ivano-Frankivsk. If somebody finds one, it is a great luck. Since February 24th, the word “shelter” has rushed into Ukrainians’ vocabulary.

A shelter is an asylum, a temporary place to spend a night or stay for some time. Shelters for displaced people emerged in relatively safe cities, in spaces like schools, summer camps, theaters, offices, and private houses. 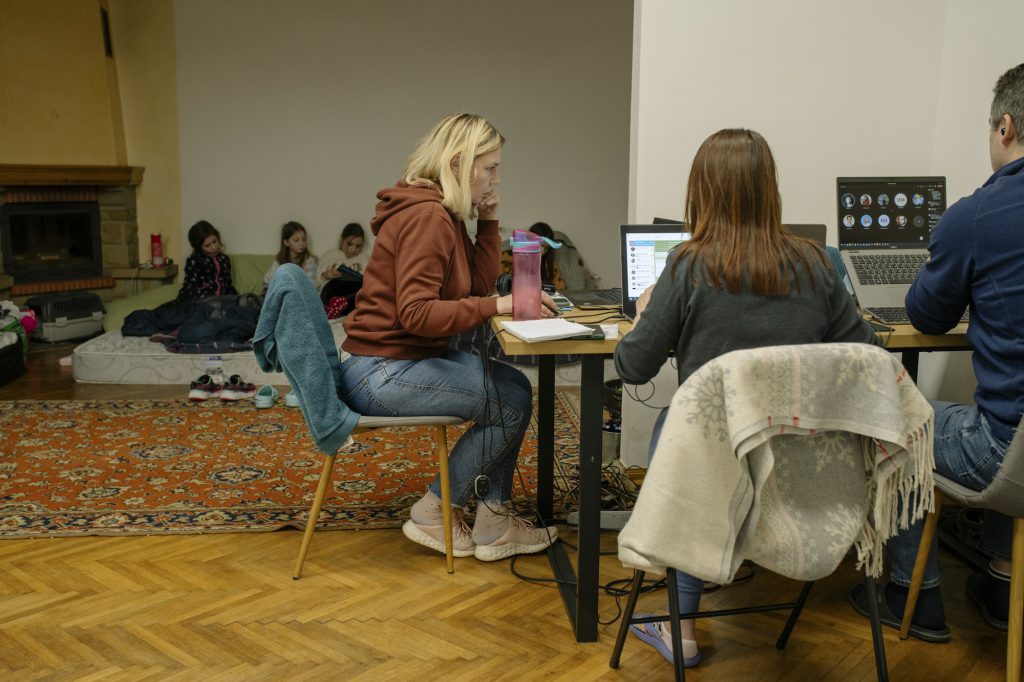 Svitlana Tarakhkalo moved from the Luhansk region to Ivano-Frankivsk eight years ago, when Russia and its proxies started the war on the east of Ukraine. Soon she started an alternative school called “The Restless”.

With an experience from 2014, in 2022 Svitlana quickly understood that many people will be moving to the west of Ukraine and abroad soon. She discussed the matter with the school partners and pupils’ parents, and in one day converted her school into a shelter. Students are currently on online learning anyway, so mattresses replaced desks in the classes.

On February 25th, Svitlana’s shelter hosted two women and six kids. They stayed for a night and then went further west, to the Zakarpattia oblast.

Since the beginning of March, the shelter has been full. 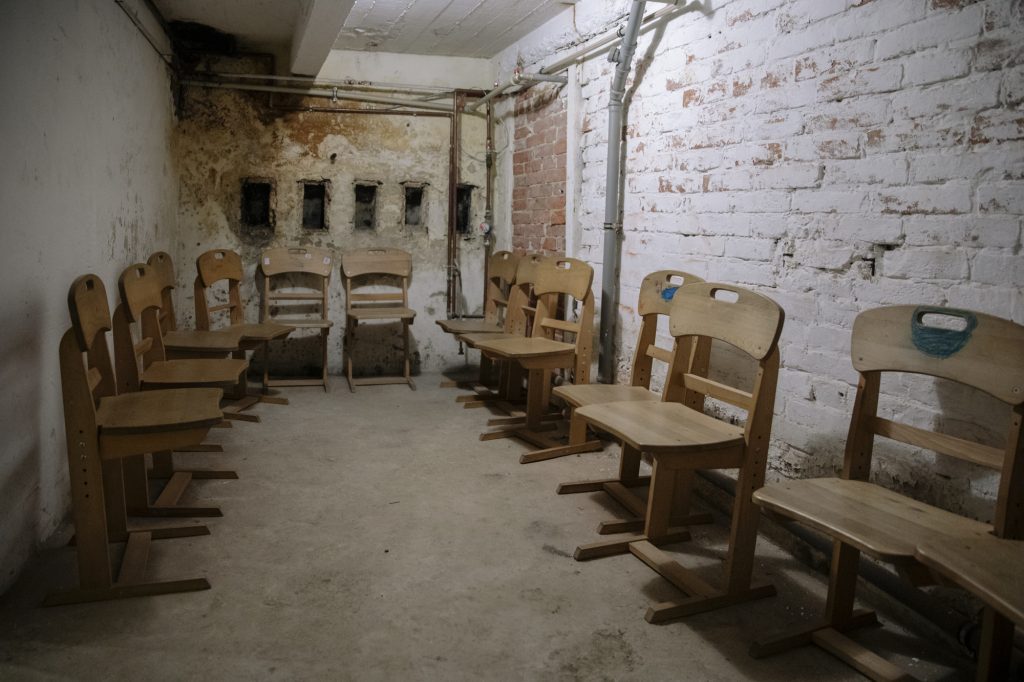 “I opened this shelter with the idea people would stay for a night or two”, says Svitlana. “I expected they would later move abroad or to permanent apartments. And now we are facing the situation when the city is overloaded and there are no free flats left. They all are occupied, with several families living in one flat”.

Thus, an opportunity to move is rare, and people stay in the shelter for long.

Svitlana’s school rents the 2nd and the 3rd floor in a three-storey building. It has seven rooms where eight families live now. Before it started to function as a school, the building was divided into apartments. That’s why there is a kitchen and two well-equipped bathrooms. Here, families live in better conditions than those who stay at public schools. Living in “The Restless” is like living in a hostel: you can cook in the kitchen by yourself, use washing machines or a shower. Except that it has no beds, mattresses are put on the floor.

Washing machines, thermoses, kettles and hairdryers for the shelter were bought by STAN NGO. The organization also supports other shelters: in Lysets village in Ivano-Frankivsk suburbs, in Chernivtsi, Vorokhta and Bakosh (Zakarpattia). Its office also serves as a shelter for employees of non-governmental organizations from the East of Ukraine. All these shelters represent a collaborative network, open to other shelters to join, as well as to other volunteer initiatives that need help.

Svitlana Tarakhkalo and Maria Keliy visit all the shelters every week. New people are arriving, and it’s important to talk to them about their needs.

“When people flee from cities under fire and find themselves in a comfortable and heated place, with a mattress and a chance to have their meals undisturbed, they think they have enough”, Svitlana explains. “But in time, through talking to them, you find out there are other needs. For instance, in their normal life people used to take some medicine, and stopped doing so because of the war. All the situations are different, you need to talk about all of them. You cannot just hand out a list for people to mark the necessary things”.

Let’s give other examples of such needs. Older people often have difficulties getting up from a low mattress, they need a proper bed. Also, there is a huge number of displaced people in Vorokhta town in the Carpathian mountains, and local shops have not been ready for this. Local volunteers help with food, but medicine and exercise books for schoolchildren are harder to find. Svitlana and Maria collect requests and try to fulfill them with the support from STAN and volunteers who deliver medicines and other things needed from abroad. 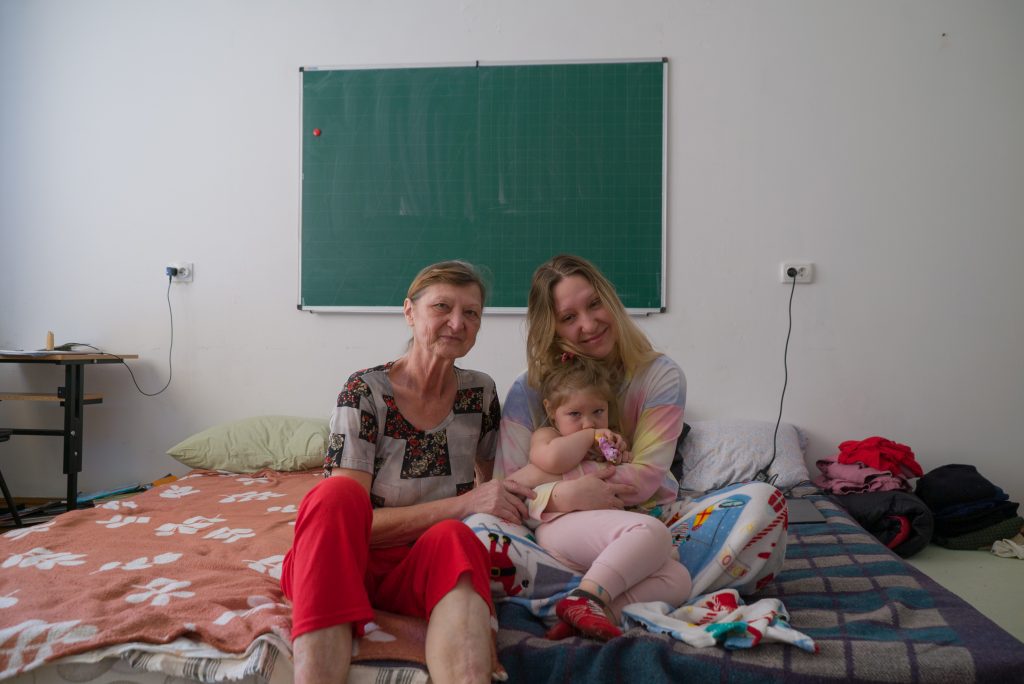 However, living at “The Restless” is very different from living in a hostel. First of all because of residents’ unity – all in the same boat. People who live in the shelter have to self-organize and cooperate.

There is a schedule for the shower and washing machine. People who live nearby, at a tourist agency office, are also on this schedule. Cooking is a different story. Imagine every family cooks for itself – the kitchen would turn into chaos soon, dishes and burners would be scarce. That’s why residents agree that each day a person on duty cooks for everyone (and those who need can additionally cook for themselves). Usually it’s soup or borshch, cereals, pasta, or mashed potatoes with meat. While we are talking to Svitlana in the kitchen, Liudmyla is cooking pancakes. They will also have potatoes, salad and meat for dinner, she says. Liudmyla cooks for 25 people today.

Residents usually do grocery shopping by themselves. Many people have been able to keep their jobs and work now remotely, so they can provide for themselves. If somebody needs help, the shelter supports them. Additionally, together with partners and donors, the shelter has stored nondeteriorating supplies: water, cereals, pasta. The storage is for the situation if there will be a need to stay for many days in a bomb shelter. There is also a refrigerator with bread and meat in the basement.

Often bread is brought to the shelter. Then residents make toasts and hand them over to volunteers at the train station who make sandwiches for passengers and crews of the evacuation trains. 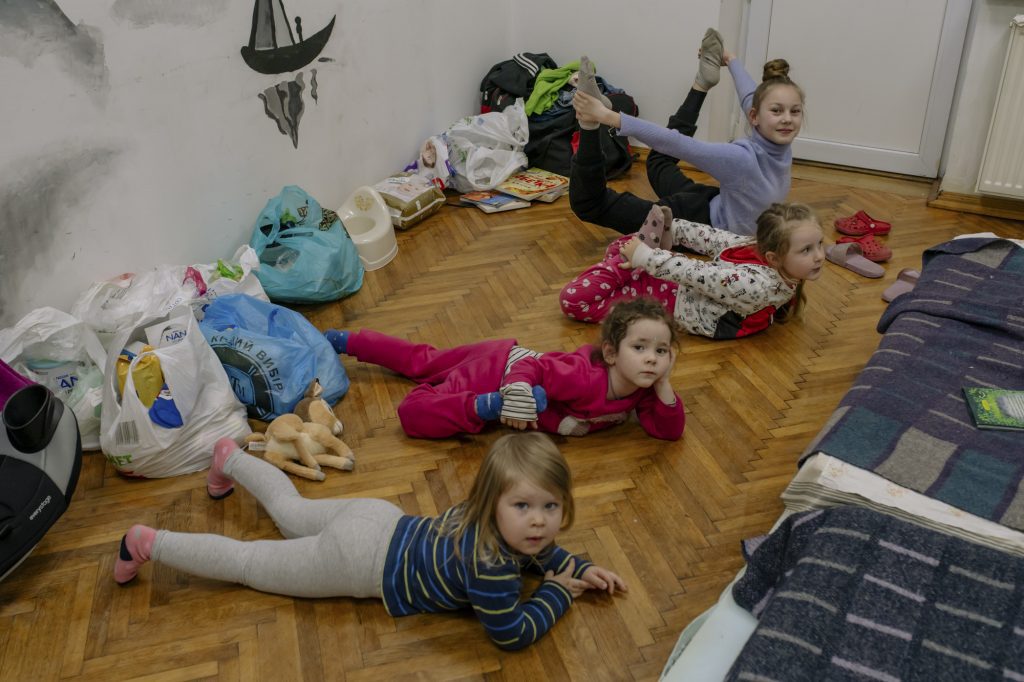 Schools are needed too

In that situation, people usually tell themselves it will not last long. “Eight years ago I left Luhansk thinking I’ll be back home in two weeks”, says Svitlana Tarakhkalo. “I thought it would be safe in Luhansk soon. And now there is an understanding that only mine clearance will take much time. And renewing the infrastructure of big cities will also take more than one week or month”.

As it has already been mentioned, in relatively safe cities flats for rent are scarce, and shelters like “The Restless” are mostly full. One could still find a place in some shelters with worse living conditions, with no shower or equipped kitchen.

“The Restless” is a school first, and children will come back to offline learning one day. The same situation is with public schools turned into shelters. Yes, we need spaces to live, but we also need spaces to study and for nursery schools too. People who are working, volunteering and don’t have time to stay with the kids the whole day or cannot leave them at home alone feel this need the most.

There are already some initiatives for creating new living spaces in Ivano-Frankivsk and other cities. One of them is the renewing an old university dormitory be METALAB platform. The dormitory could accommodate around 150 people. In any case, there is an urgent need for social houses that could be built fast.