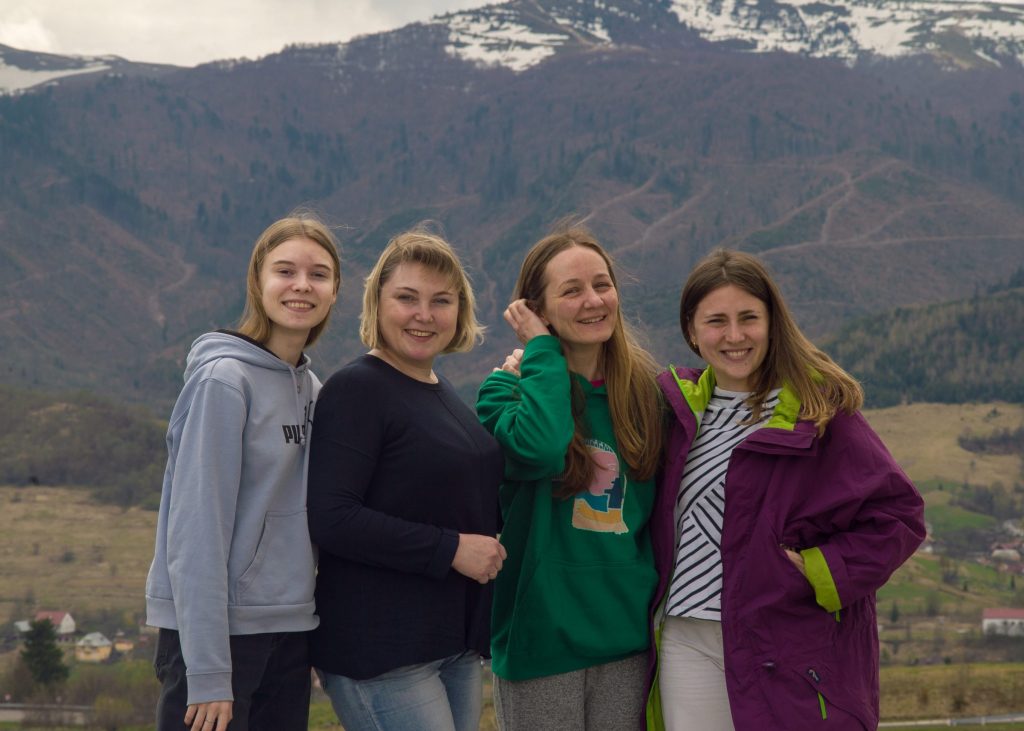 All in the same boat

Well before February 24th, the team of STAN NGO agreed they would make their office aka resource center open to the activists who need a space to work or a community of colleagues in Ivano-Frankivsk. The team agreed that in case of war, the office would become a shelter to host those who fled their cities, so they could live there and work like in their own office.

This is not only about the walls, not only about the 114 square meter space with comfortable furniture, kitchen, and fast internet connection. The idea is that the organization itself becomes a resource center, a nerve center that connects people, helps everyone to continue doing his or her unique job even when far away from home.

Here are three stories of how activists managed to leave unsafe places and find themselves in the new environment. Meanwhile, this is a story about the human value of forcefully displaced people and how their new communities can benefit from this new situation.

Nova Kakhovka has been occupied since the first day of the war. Yana Malyha managed to get out of town on April 23rd. After two months, after two failed attempts.

The third try was also not easy. One day, Yana was told there are two free places in a car. She had only a few minutes to decide and pack her things.

The car was moving in a column next to other civilian cars. Yana says, in a column one has fewer chances to go missing, and more chances to survive. There have been many situations when people tried to leave an occupied area by themselves, and then disappeared, the car and people inside.

They passed forty enemy checkpoints. Invaders were checking the documents, personal belongings, and forcing men to undress. They were looking for patriotic or military tattoos. Yana recalls:

“When we finally made it to the free territory, we had to move on right away. The shooting was close behind us. In Lviv we heard the sound of an air alarm for the first time. We had no sirens in Kherson Region, we only could hear missiles heading to the unoccupied territory of Ukraine”.

For 15 years, Yana had been working at the Culture and tourism department of Nova Kakhovka city council. She got acquainted with STAN in 2021 when she organized events for the Peace days in her town. After February 24th, Yaroslav Minkin, STAN CEO, told Yana she should move to Ivano-Frankivsk when she has a chance.

And finally, she broke away. “I understood many things have changed in the two months, that’s why I also asked if it was possible to host another two women. Yaroslav said they will always find a possibility for them to stay and to have space for work.”

At that moment, STAN has been working on the psychoemotional support program for IDPs in shelters. Yana has been trained as a psychologist and has got experience in the field.

She is living now in a shelter in Bakosh town in Transcarpathia Region where she works as a psychologist and an educator. First of all, she works with children in the shelter’s educational space. This is mostly manual work, making of souvenirs – such activity combines art therapy and making useful things.

Yana also provides psychological consulting. “STAN allowed me an opportunity to become helpful to the people, and this is a therapy for me, because I have no time to think about bad things, but reorient my mind on kindness and kids. This is how my rehabilitation is going on.”

We often say “after the full-scale invasion” or “since the full-scale war started. For Anastasiya Prokopenko, an executive director of Tochka Dostupu (Access Point) NGO the war was full-scale already in 2014. She is from Donetsk.

In 2014 the team of her organization left Donetsk. Most of them, including Anastasiya, moved to Kramatorsk, a city in Donetsk Region, to stay closer to the problems of the region. However, in 2022 it happened again. “Again, for the second time, my family and I are moving, for the second time we are getting the IDP papers”, she says.

She came to Vorokhta, a town in the Carpathian Mountains, in March. Anastasiya wanted to be helpful, so she contacted the town council and volunteers. This is how she met STAN as the organization is curating the local shelter. “They needed a coordinator who will be in Vorokhta to understand the needs of the shelter’s residents, organize events for them and provide informational help”, Anastasiya says.

Anastasiya collects requests and helps with the distribution of humanitarian help to make this process well-organized. There are several warehouses and several organizations that provide help. IDPs fill in a Google form where they indicate their needs, then personal packages for each person are assembled. So people don’t run from one warehouse to another to get shampoo at the first one and pampers at the second one.

Anastasiya also coordinates psychosocial support for people in the shelter. The program is designed according to the requests. For instance, several sports classes are open now (tennis, hopak dance). These classes are free of charge for kids. The main focus here is on children, but adults join in too. They participate in family consultations with psychologists, mountain walks, or voluntary community work.

Locals are also invited to such events. When forcefully displaced people get acquainted with locals, the mutual tensions reduce, and mutual stereotypes are challenged. People can meet each other and understand who is who.

In the same boat

On February 28, Hennadiy Maksak and Olha Chyzhova, founders of the foreign policy council Ukrainian Prism, received messages from their partners in Brussels and the USA. Both messages had similar content: “We are aware the Russians have got lists with the names of activists. We insistently recommend everyone who is currently in Kyiv should leave the city”.

They went to Ivano-Frankivsk. On the road, Hennadiy contacted Yaroslav Minkin, who he knew from the Eastern Partnership Civil Society Forum. Hennadiy and Olha understood, they are going for more than a few days, that’s why they will need to make connections and work somewhere.

According to Olha, STAN became a foothold in Ivano-Frankivsk. “It allowed us an opportunity to work efficiently from the first day, to engage resources, and keep normal human communications. We came to a lively collective that warmly accepted us. We used to come to the resource center like our office. We shared experiences, talked to people and that was so cool both from the professional and human point of view. We always had lunch together. Openness, kindness and support were so important for us while we were not at home.”

Following their organization, people from other NGOs arrived at the resource center, Caritas Kharkiv, Krym SOS among them. They created a wide circle for friendly and professional communication. For instance, Ukrainian Prism had not worked with humanitarian help before, and now had to do this. They focused on Chernihiv where most of the founders come from. STAN team already had some experience in this field, so they could advise how to organize logistics or where to find certain things. Also, Ihor Trydub from Caritas Kharkiv had valuable experience of cooperation with partners that provide humanitarian help, and this turned out to be beneficial for everyone.

In other words, it was a situation when people from the same field work and sometimes live together. All in the same boat, all have common trouble and common tasks. This resulted in cooperation.

A good example is a story with power generators. Olha Chyzhova:

“At the time of air alert, everyone in STAN goes to a corridor to stay behind two walls. During one of such alerts, the STAN team had a meeting, and we’ve heard they talk about one donor’s help, and that there are power generators. At that time Chernihiv had been completely cut off from electricity, the city has spent 37 days under shelling, and even hospitals had no power. And here STAN says: we have got generators. Chernihiv at the moment was surrounded by Russians from three sides, and from the forth side the automobile bridge to Kyiv had been operating. The Russians blew it up, but the generators were of such huge need that volunteers took them across the Desna river in rubber boats.

Hennadiy Maksak says it is hard to work when you have left the city that is suffering under shelling, but at the same time, this position allows you to help more efficiently. “In Ivano-Frankivsk, we started an initiative called Save Chernihiv. We bought power generators for hospitals and tools for the water services company. We felt we were able to help from a distance because under the bombardment and stress you would hardly keep working on creating humanitarian channels or body armor supplies to Ukraine.”

On the other hand, people who came to Ivano-Frankivsk fit into the local ecosystem. For instance, Ihor Trydub from Caritas Kharkiv is a psychologist, and he organically joined the design of the psychoemotional support program for shelters, and later he took charge of this program.

Yaroslav Minkin argues, “We need to continue analyzing who is coming to us. We need to learn how these people could become beneficial for the local community. This approach “people came, we give them food and that’s it” is not sufficient. There is a huge need for specialists. We see potential in those people who arrive in Ivano-Frankivsk, we don’t look at them as simply IDPs.”

The IM Swedish Development Partner and Prague Civil Society Centre support the organization’s team and the activities of the resource centre, where the coordinating headquarters of the Carpathian region’s shelters are located. House of Europe provides the necessary equipment for the work in the region. The Hilfswerk International provides humanitarian assistance for shelters, food and comprehensive support for people, provides funds for baby food for the youngest IDPs.

Save the Children Foundation with the support of the European Commission’s Directorate-General for Civil Protection and Humanitarian Aid (ECHO) helps to provide comprehensive work with children and young people affected by hostilities.