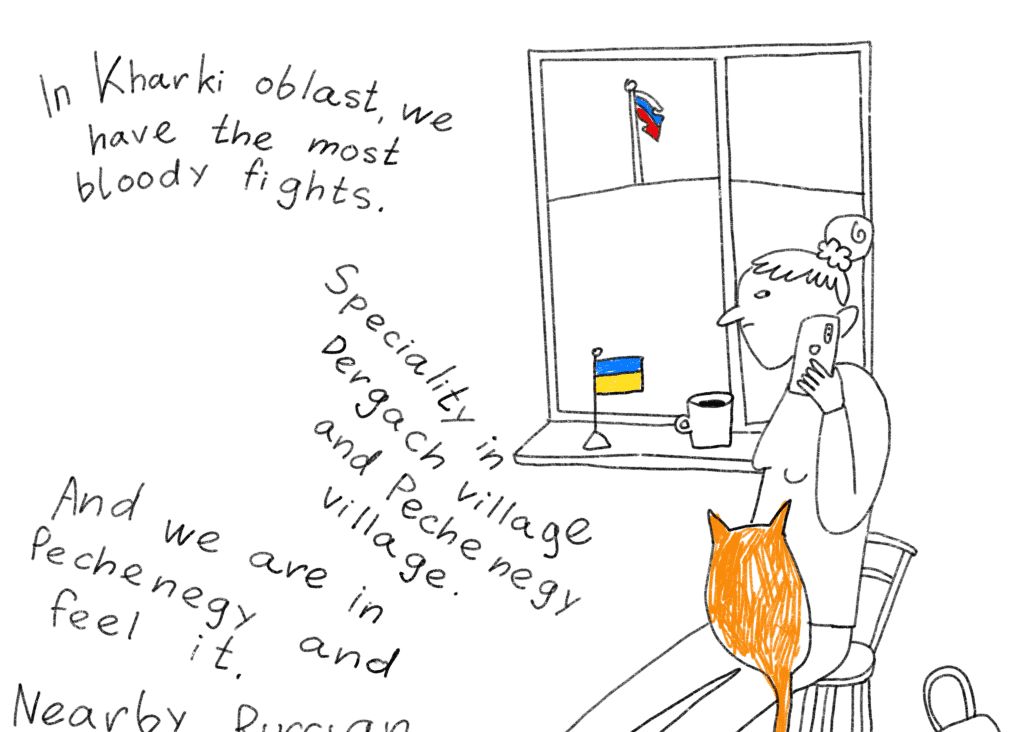 This artist from the Donetsk region had to flee to Germany from the Russia-Ukraine war. Now, she draws stories of people who stayed in Ukraine – in particular those living in occupation.

Meet Masha Vyshedska, an artist from Bakhmut (Donetsk region). For a few years, she lived and studied in Donetsk and Luhansk, which have been occupied since 2014. After that she dropped out and became engaged in art and civic activism on territories controlled by Ukraine. A few days before the full-scale invasion, Masha left Bakhmut and went to Western Ukraine, from where she traveled to Halstenbek, Germany. Today, her drawings with stories of regular Ukrainians continue impressing and moving people in Europe and all around the world.

Tell us about yourself. How long have you been drawing?

I was born and raised in Bakhmut, which is a town in the Donetsk region. It used to be called Artemivsk, however in 2017 it was decommunized, and the town’s original historical name was restored.

I’ve been drawing for as long as I can remember. Deep down, I viewed myself as an artist – but had never considered it as a career, especially as I saw my father start drinking. He never had any support when it came to his art, and he never succeeded.

When I was still in school, I used to be good at chemistry and biology. So I went on to study at the profile lyceum at Donetsk National Medical University. I had studied there for four years, however I only finished three years of university, because I also went to study in Luhansk for a year (the city of Luhansk had already been occupied by that time). Professors who hadn’t left yet continued teaching in Luhansk.

Upon having lived in Luhansk for a year, I felt I’d find it unbearable to stay there. My best friend told me that Donetsk National Medical University was being relocated to Kramatorsk, which was a town under Ukraine’s control. So we transferred to Kramatorsk together. I returned to Bakhmut and went to university every day.

In 2016, I met my future husband Rostyslav in Kramatorsk. We became close, started living and working together. With Slava, I would draw all the time. He would purchase my art supplies, help me get started on freelance platforms, develop my style and craftsmanship. My husband gave me the support that my father never had. My style improved. I started making money with my art – and dropped out of university, as I didn’t have any time or inspiration to keep pursuing a career in medicine.

We freelanced and applied for educational programs for civic activists. We studied, met new people, organized our own projects for creative youth.

In 2019, I began taking part in art residencies. For three years in a row (2019 through 2020), I’d been going to a residency called “Diffusion,” organized by my friend Alan Meier – an artist from Berlin. The first residency I participated in took place in Dobropillya, the second one in Mariupol, the third one in Kramatorsk. In 2019 and 2021, I also went to a residency called “Aura of the City” in Starobilsk.

What was your life like before the great war? What were your projects and plans?

My two most recent projects had to do with street art. With a grant from House of Europe, we created a street art laboratory for youth in Bakhmut. It was awesome! We would draw every single day. The laboratory functioned for eight weeks. In six months, thanks to a different grant, we were able to resume our work. I wanted to create an anti-school of art, where schoolchildren of different ages, children with disabilities, and their parents could specialize in art. But I never got a chance to do it.

Since October 2021, my husband and I have been sick a lot. First COVID-19, then other things. As soon as we began getting better, we started planning a tour around Ukraine. In 2018, we went on a journey to see all the region centers of Ukraine. And a few months ago, we were finally ready to discover all the small towns in Ukraine (with population of approx. 50-80 000 people).

I really wanted to go somewhere because I started to feel claustrophobic in Bakhmut. I’ve been to every street and photographed every house in different seasons. I needed a change of scenery.

Rostyslav and I also began thinking about our move. While looking for accommodation in Western Ukraine, we thought about Ivano-Frankivsk – because STAN is based there, and we could join their projects almost immediately. I’ve been familiar with STAN since 2019, however I do feel like it’s always been part of my life. So I texted their leader, Yaroslav Minkin. He replied: “Get out of Bakhmut! Russia is already making lists of people to exterminate.”

I believe this was on February 17th or 18th. We packed within a week. On February 21st, we left for Kyiv, stayed at my friend’s place. Went for a walk in the city on the 22nd and 23rd. The night before February 24th, we were going to Ivano-Frankivsk by train. I wake up at 6 am, Slava looks at me and says: “The war has begun. The real one. Kyiv was bombed.”

Where is Rostyslav right now? And how did you end up in Halstenbek?

For a few days, we stayed at the STAN shelter. Then we left for Yaremche, where we met our friend – a journalist from Bakhmut. From there – to Uzhhorod, closer to the border. After that my friend and I went to Hamburg, where a friend of Rostyslav’s happened to live. Slave himself stayed in Zakarpattya, applied for military service, however he doesn’t have to serve for now. He’s helping other women and children cross the border at the moment.

When we were leaving Ukraine, my friend froze. She had completely lost her ability to make decisions. I, however, managed to pick myself up by the bootstraps, began speaking English fairly well (which was a surprise even for myself), texting everybody, figuring out maps and itineraries. I dragged everyone with me because I understood that these women had their world falling apart around them.

Tell us about your drawings. You’ve been making them since the war began, haven’t you? How did you come up with the idea?

My first drawing dedicated to the ‘great war’ theme was about a man in Dnipro defecating on a mark left by saboteurs.

Then I got a message from Yulia Lyubych from STAN, who asked me to create a few illustrations for the project carried out by STAN and MitOst. The stories got more dramatic.

In 2014, I tried to avoid talking about the war. But here I felt that even if I wasn’t protecting my country with weapons, I still had to participate somehow. It’s no use trying to hide your head in the sand.

Now, every day starts with me opening up a folder with story screenshots sent by STAN. I draw the main plot, translate the text into English and write it directly on the drawing, because it isn’t very clear what’s going on without the text.

I’ve noticed that text in your work serves as a background – literally and metaphorically. What do you feel when you draw?

I try to distance myself from the theme – because if I tried to live everything through, I might’ve become depressed. If you think about it, the stories are devastating! It’s difficult to draw them without distancing yourself. I hope my drawings will be useful. I hope everyone who’s guilty will be charged and prosecuted.

Your characters look very cute as opposed to the horrible things happening to them, or around them. Do you do this conscientiously?

I don’t ruminate on my drawings too long. Normally, I’ll just stick to the key message and work with it. My drawings do look sort of childlike – it happened intuitively in the beginning. But now I understand it’s necessary for balance.

Because the events themselves are really scary. If you amplify them with dramatic illustrations, it’s going to be too much. But if the image is simple and unassuming, I think it’s interesting.

I wouldn’t like to depict Ukrainians as a poor, miserable people. There are devastating things happening to us – but there’s also hope, even in the scariest stories. The people aren’t desperate. They keep doing things to survive and win.

I know that you’ve been working on a comic – what’s it about?

I’ve always recorded my life in pictures, no matter if they turn out to be funny or not. Sometimes it’s my way of thinking about difficult topics like parenting or language.

Right now, it’s important for me to record what had been happening to me and my husband a few days before the war, and how I managed to get to safety. And also about Slava’s experiences on his way to me.

I’m going to post this comic on my page. Might try printing it, or issuing it in separate prints. It might end up being a series of illustrations to posts about me. Anyhow, I’m going to think of a way to put it out in the world.

While we were working on this interview, Masha’s comic came out. You can find it here.

We also recommend looking and reading into her drawings about the war. Share them with your English-speaking friends to explain what Ukrainians are going through and how they feel about it.

The interview was taken by Ksenia Yanko