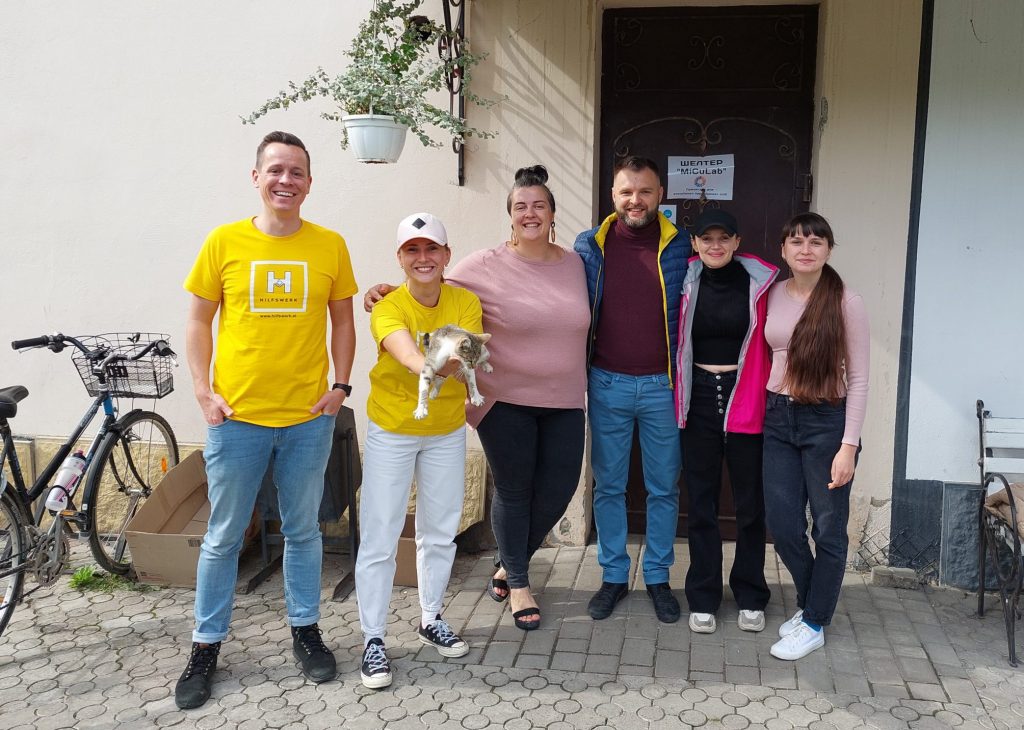 Hilfswerk International (HWI) is a non-profit organization registered in Austria which provides development cooperation and disaster relief. It was founded in 1978, and since then it has been working in more than 30 countries on four continents. With all that, it stays non-bureaucratic, resilient, addressing challenges fast. On February 24th, when millions of Ukrainians lost homes and means of living, HWI was among the first who started providing help. The organization is currently opening an office in Ukraine. This text shows what has been achieved during the last seven months and how STAN Youth NGO and Hilfswerk International were building their cooperation. 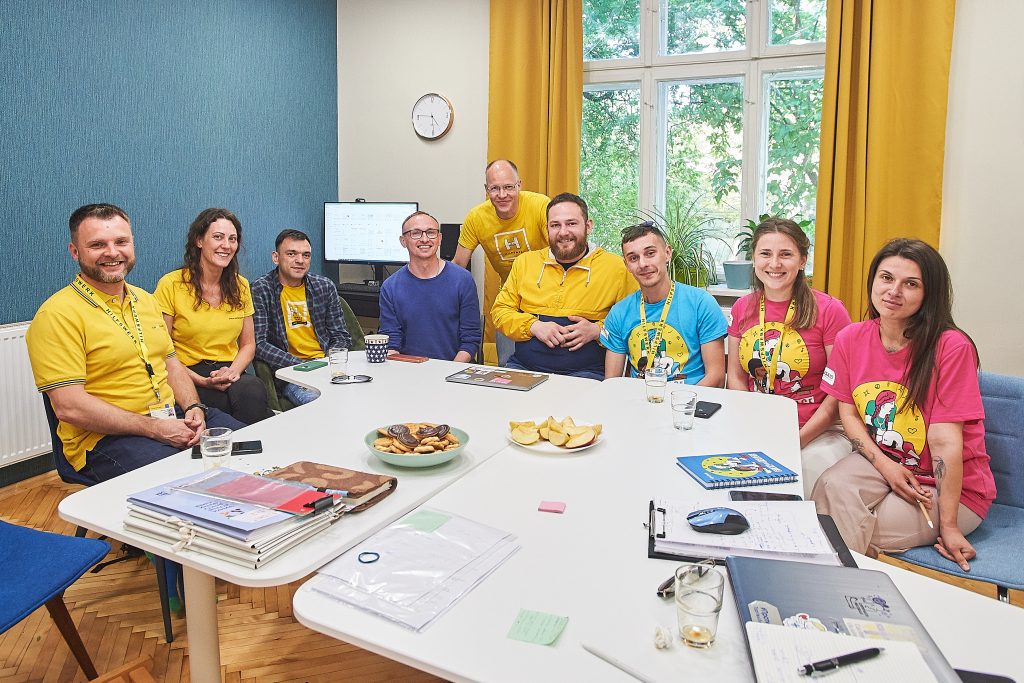 Hilfswerk International and STAN Youth NGO started cooperating before the full-scale Russia’s invasion. In 2021, the organizations together with the Georgian and Armenian partners were discussing the idea of a project for supporting youth entrepreneurship.

The  full-scale Russia’s invasion shifted their priorities. In the morning of February 24th Yaroslav Minkin, Chairman of the Board at STAN, and Elena Smirnova, Hilfswerk International regional manager of the Eastern Europe and Western Balkans, called each other to talk about how they could help Ukrainians that suffered from the war the most. 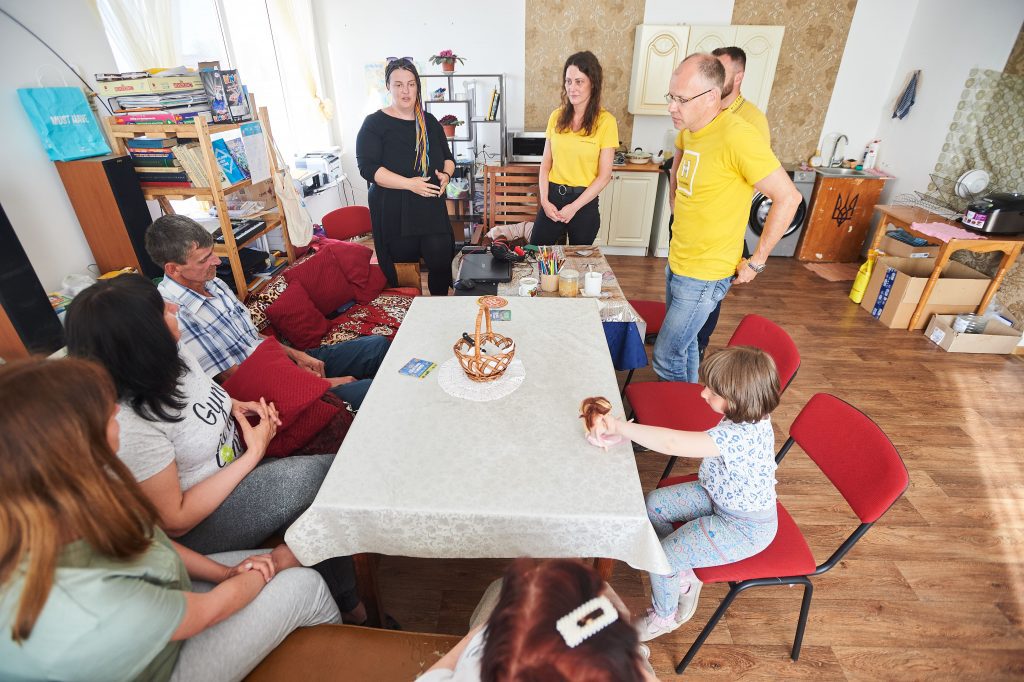 HWI started working on raising funds, purchasing food and everything that was necessary for the internally displaced people, especially the items that were difficult to buy in Ukraine. The organization’s office in Wien became a hub for collecting humanitarian help. Businessmen and ordinary citizens were constantly calling to HWI offering to help with money or with some goods.

In the HWI office everything was sorted, packed, loaded and delivered to the Hungarian-Ukrainian border where partners from Bakosh, a border village in Ukraine, picked up the torch. People of Bakosh, from the education field in the first place, organized a shelter in the building of a local school and a transitional logistic point. They were taking in stock humanitarian goods from abroad, and then the representatives of STAN were delivering those things to their partner shelters.

At first, this process was quite spontaneous, but only up to a certain time. “We needed to understand how we could systematize and channel the humanitarian aid that was coming from all-around, and efficiently deliver it to people who needed it”, says Elena Smirnova. HWI defined several focus areas in Ukraine and started working in this direction with STAN.

Shelters, train stations and the roads to the east

Foremost, it is a creation and support for the shelters for the IDPs. HWI were sending to Ukraine trucks loaded with everything IDPs would need to arrange a new space to live: small and large household appliances, sleeping bags, folding beds, mattresses, kitchen stuff. 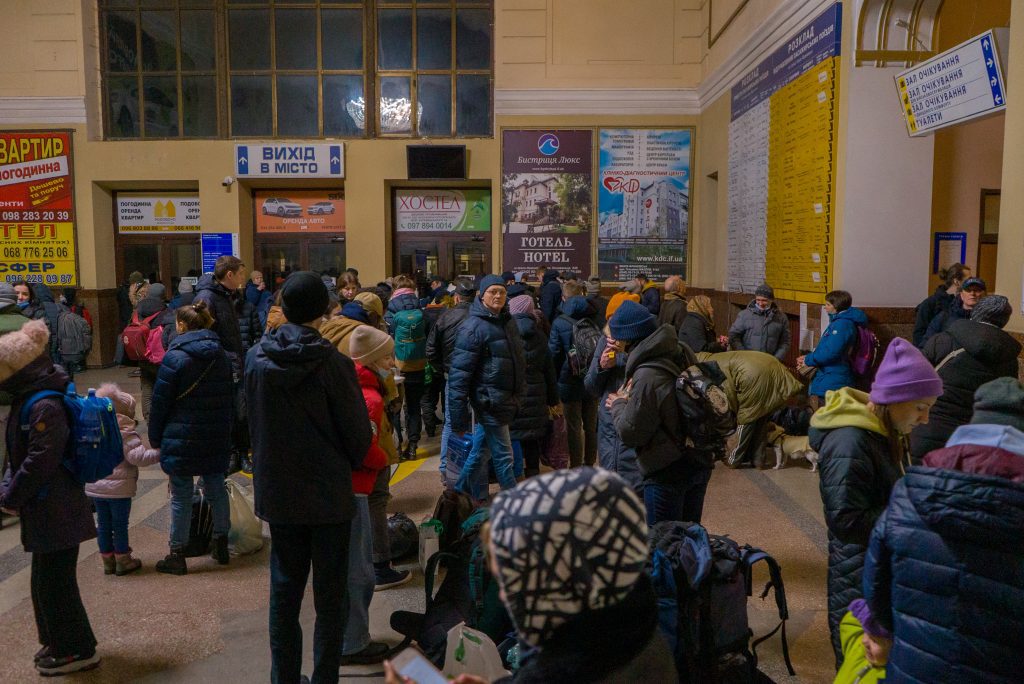 The second focus area that Hilfswerk International has been working on since the first days of spring is supporting people at the train station in Ivano-Frankivsk. Thousands of IDPs have been arriving in the city by trains. Many of them wore only the clothes they had on them when the attack happened, when they were forced to leave their homes. Often, they had no water or food with them. Sometimes the trip took several days, because the railroads were shelled by the Russian army too. People were exhausted, hungry and thirsty, in shock.

If their train arrived at night, they had to wait at the station until morning, until the curfew ended. Volunteers took duties at the station to emotionally support people, and offer them hot drinks and food. Local businesses and many citizens joined later, offering their help and resources. STAN members were among those who started this initiative, and HWI – those who supported it in the first place. 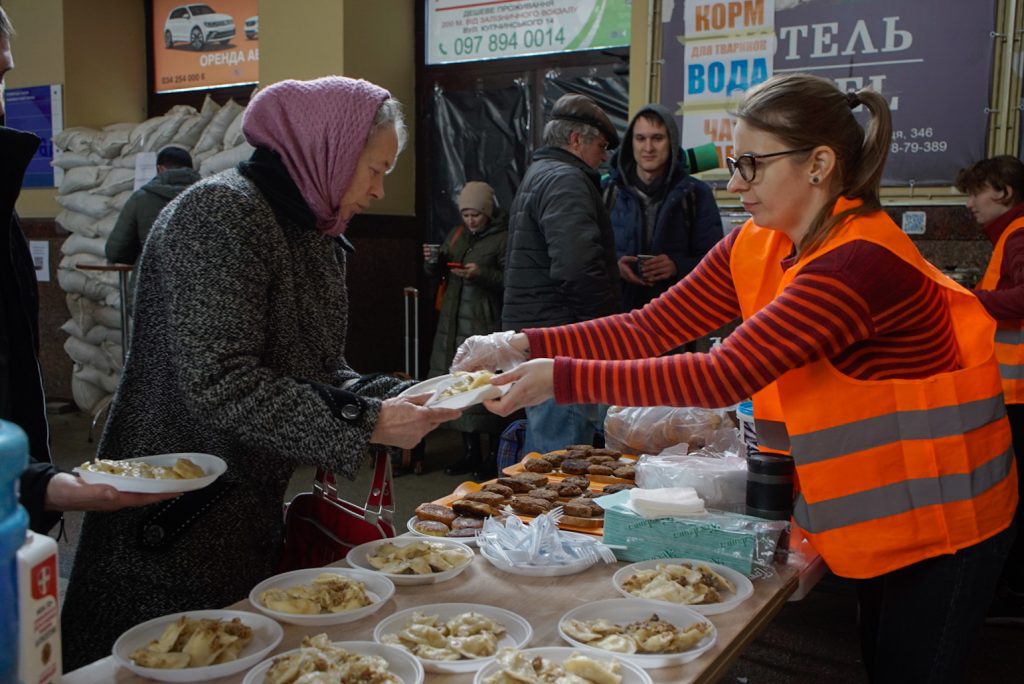 Other aid from HWI STAN sent to the places where it was mostly needed. Sometimes it was through cooperation with other NGOs. For instance, with the NGO “Good luck” from Mariupol. People from this NGO managed to leave Mariupol, but at the end of March they were just 20 kilometers from the city, in the village of Melekine. “There was a shortage of food and warm clothes. Some of our guys delivered the aid to the village and to Mariupol. It was difficult, due to many check-points, to enter Mariupol at that time…  But they delivered this aid, risking their lives. There was a power generator, a lot of food and clothes”, says Ihor Menshakov, head of “Good luck” NGO.

In the beginning, Hilfswerk International mostly channelized aid that was coming to Ukraine (transferred fundraised money for the project of the IDPs support, sent equipment, medicine). Now they have another level of work. The organization is implementing two big programs in Ukraine, with a total budget of around four million euro. Main funding sources are the Austrian government (through the Austrian Development Agency and Nachbar in Not foundation), and donations from the citizens and socially responsible businesses.

The program is “Emergency relief and protection of IDPs in Ukraine, and Ukrainian refugees in Moldova” is implemented by STAN Youth NGO together with the partners from Moldova: Gender-centru and Moştenitorii. It is planned until October, 2023, and has three focus areas: support of shelters, psychosocial support for IDPs, and gender-specific protection of the IDPs. 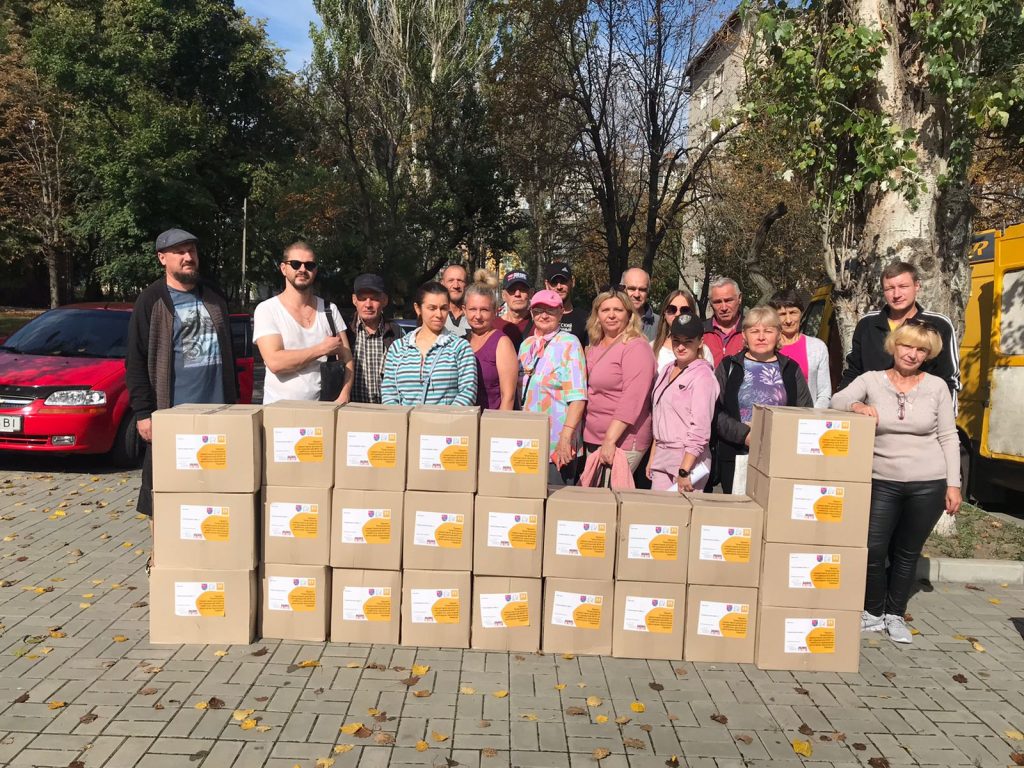 The second program has just started, and it is focused on the complex support of the IDPs. Humanitarian aid cannot satisfy all the requests. People who moved to the new cities often don’t have any social contacts there, and far less a financial cushion. They often face psychological problems. “Our idea is creating a network of helppoints – centers where people could get more than humanitarian help. There will be specific spaces for the events with children, psychologists and social workers will be there. These will be the centers of the comprehensive support”, says Smirnova.

In the framework of this program, Hilfswerk supports people from the Nikopol area who live under constant shelling from the territory of Enerhodar, occupied by the Russian forces. “Small and medium businesses stop working, larger enterprises shrink, and slowly the humanitarian crisis comes. More and more people need humanitarian and emotional support”, says Dmytro Bychkov, acting head of the Nikopol district council. 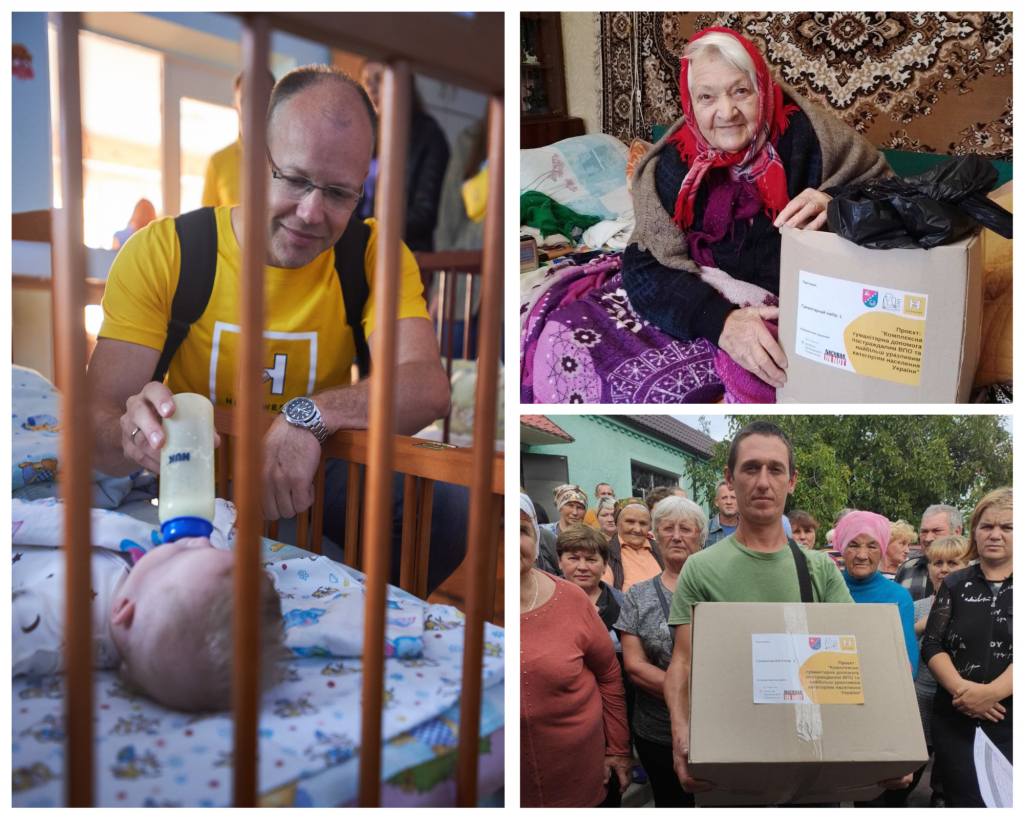 HWI responded to the request from the council and started providing aid for 2500 families – those who need it the most, and then the number grew to 3000 families. “The Austrians had a complex approach. They developed three categories of aid sets: for retired people, for families and for the multi-child families. In such a way, people are able to get things they need the most. I was surprised by the fact that the Austrian charity givers are interested in small, but in fact very important issues: would it be convenient for people to receive the aid sets at the distribution point or is it better to deliver it to the villages? What should be the size of the box, so that people would be able to carry it. They ask how they could improve their work. For instance, next month they are going to add the “emotion sets”: children coloring books, balls. Also, they will provide winter sets, warm clothes”, says Bychkov.

Another focus area of HWI in Ukraine is supporting the medical and social institutions. Since spring, it has been supporting an orphanage in Ternopil and a regional children’s hospital in Ivano-Frankivsk. “We have received the medical equipment: X-ray apparatus, ultrasonography apparatus, expensive medicine, and L-thyroxine for the hormone replacement therapy that was extremely needed in the first days of the war –”, says Oksana Daschenko, vice chief of the Ivano-Frankivsk regional children’s hospital.

For some time, HWI’s projects in Ukraine were implemented through the partner organization – STAN Youth NGO. HWI mostly supported the things STAN realized on site: work at the train station, providing the necessary items for the shelters, juridical and psychosocial support of the IDPs.

HWI is currently registering an office in Ukraine that will start operating soon. This will help to overcome some legal restrictions about their work and will make cooperation with Ukrainian NGOs easier. This means also a readiness for a long systemic work. 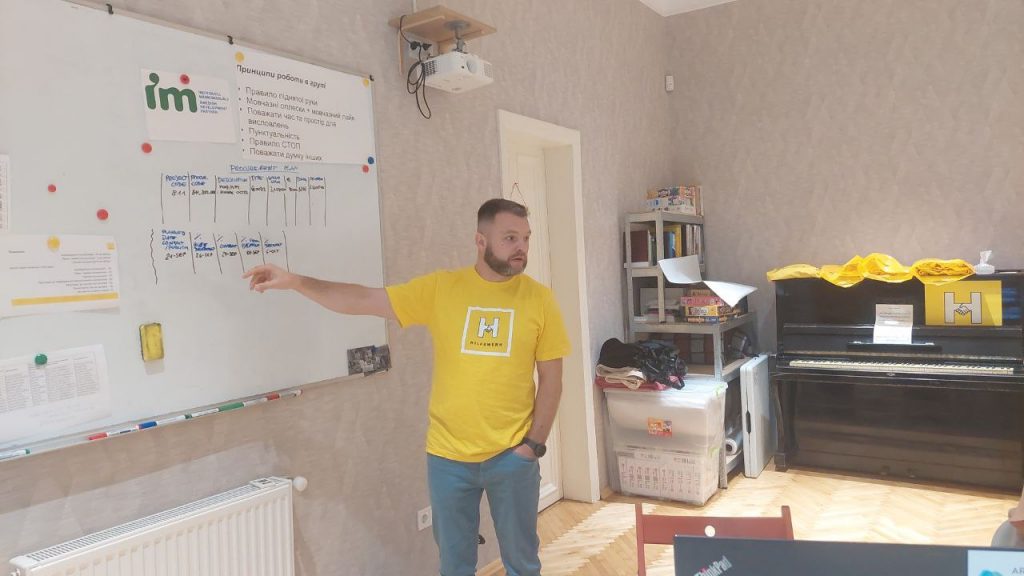 Oleksiy Zaitsev will become a head of the office. He used to work as a lawyer in one of the Kharkiv leading law firms. On February 24th, he left Kharkiv and moved to the west of Ukraine with his wife and children. He started working with STAN consulting the IDPs like himself. This is how his new experience in the law field started. The war has changed the life it used to be before. And it is great when people find a light in their current life. “I’m very satisfied to have this useful job. It is even more useful now than legal services, and I enjoy doing it. We help people in trouble”, says Oleksiy.

People currently need support to stand on their feet and find their path in the new place or to find the strength to wait until they can come back – or to struggle for their return. It’s good there are those who will support them at this moment.