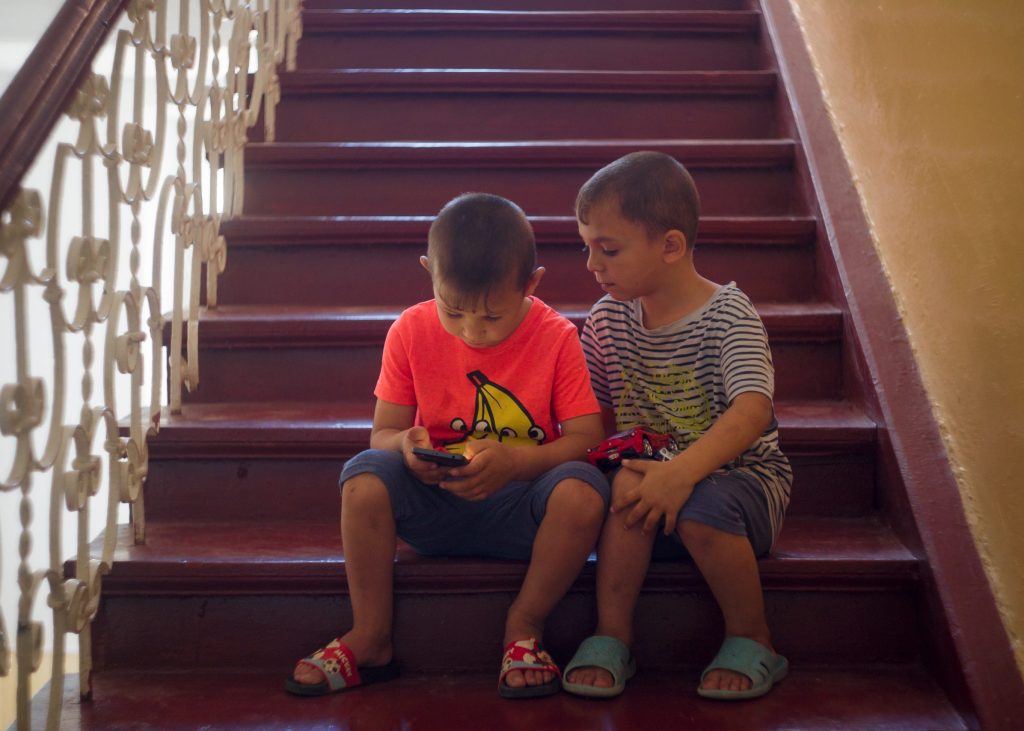 Kolomyia. A House Next to a Church

A large part of internally displaced people who came to Kolomyia, Ivano-Frankivsk region, were allocated in schools and kindergartens. Later, the city council in cooperation with the local community opened two shelters, so that people could move from the educational facilities. This is a story about residents, everyday life, challenges, and needs of one of these shelters.

Getting to know each other

— I am from Horlivka, but for the last two years I have lived in Kharkiv’s North Saltivka district. I worked at the plant. I came here in mid-March. I was thinking of coming back, but I see it is hot again over there. So, for now, I am here. There is no place to come back.

— I am from Luhansk. I moved to Popasna in 2015, as an IDP. Now, when the fighting started in Popasna, I barely left. I got a missile wound. This is how we move here and there. No city, no home… Everything is destroyed. For now, my children and I are staying here. What will come next, we don’t know.

— My name is Sveta. My husband has a disability, trouble seeing. I have a disability too. Also, Misha came with us, he is in a wheelchair. We are from Horlivka, but for the last six years have lived in Svyatohirsk. Now the town is occupied, that’s why we came here. 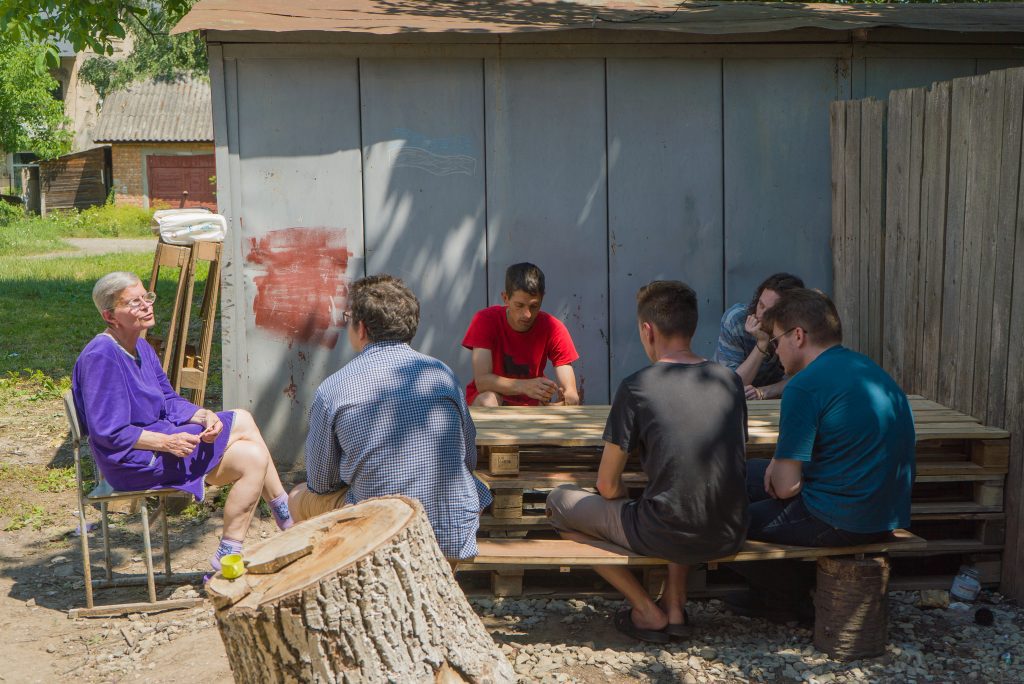 This is how we are getting acquainted. We are sitting at the makeshift table in the backyard of a shelter in Kolomyia. People are telling their stories. Every story is special, but the continuation is common: they came to Kolomyia where they were allocated at school or kindergarten. Later, they moved here – to a house on the premises of the Saint Ignacy Loyola Roman Catholic Church. In the old times it used to be a monastery, during the Soviet period – a warehouse, then – a clinic for skin and sexually transmitted diseases. Then the building was vacant for some time, and in 2022 became a shelter for the forcefully displaced people.

At first sight, it is an absolute paradise here. A two-storey red-brick building surrounded by greenery, the laundry is drying on the line. It is cozy and beautiful. But if you look closer, it turns out the historical building means not only an aura of one of the oldest towns in the Halychyna region. This means a series of technical issues: water and power supply, sanitation, roof, heating. It seems from time to time the building is breaking into small pieces. But 45 people live here and need this shelter so much. 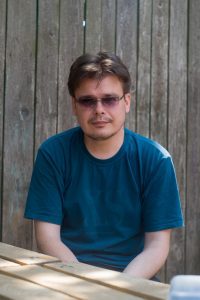 Andriy is from Borodianka near Kyiv. He lived through the invasion of his town by the Russian troops. He spent some time in a bomb shelter. He was bringing people food from the destroyed grocery shop. “The tank convoy is moving, and they take sight of you. You stand there and think, would you stay alive or die? But despite everything, we fetched food and water to the bombshelter. People were so hungry. Those hands that snatch bottles from your hands – this was something horrible. So yes, this is how we were passing in front of the tanks to a shop and back to feed people”, tells Andriy.

Finally, Andriy and his parents managed to leave Borodianka and came to Kolomyia where they ended up in the house next to a church. The shelter’s residents elected him a headman. “Same work here – distributing food, taking care of their well-being”, he says.

The headman is responsible for domestic matters, he helps people by addressing them to places where they can receive help or register for it and solves disputes in the shelter. He is also just helping the neighbors. “I am so grateful to Andriy, he is taking care of us, he fills in the forms, because we are blind, we can’t see”, says Svitlana, a woman with a sight disability.

For Svitlana, moving started in 2014 when she and her husband left Horlivka for Sviatohirsk. They lived in a resort house for people with disabilities. But after February 24th, the war reached that place too.

After changing places many times, the couple finally found a shelter in Kolomyia. They share a room with Mykhaylo, a man in a wheelchair who they met on the road. The shelter has no facilities for people with disabilities, and the residents manage how they can. For instance, they brought a plastic chair to the shower for Mykhaylo. But the old house lacks even such a minimum as a wheelchair ramp, not to mention other accessibility arrangements.

When asked about the conditions for blind people, Svitlana sighs and says: “What else should be here for people with such disabilities like ours? Oh, lots of things! Everything should have special marks so that a person with sight problems would see the paths etc. I have sight problems, and my husband cannot see at all. I always guide him, he cannot leave the room by himself”.

There is a rule in the shelter that residents clean the common spaces in turns. Every day – another room. It is harder for Svitlana than for people without disabilities, but she wants to keep this duty. She is trying hard to clean as best as she can.

“In Sviatohirsk, everyone was the same, everyone had a disability, and we had no scruples about it. Someone was in a wheelchair, another one was blind etc. Here I feel a little misplaced because other people can see and I cannot. Nobody told me anything bad about my cleaning, however. We are adapting somehow. There is no way out, life is going on”, she says. 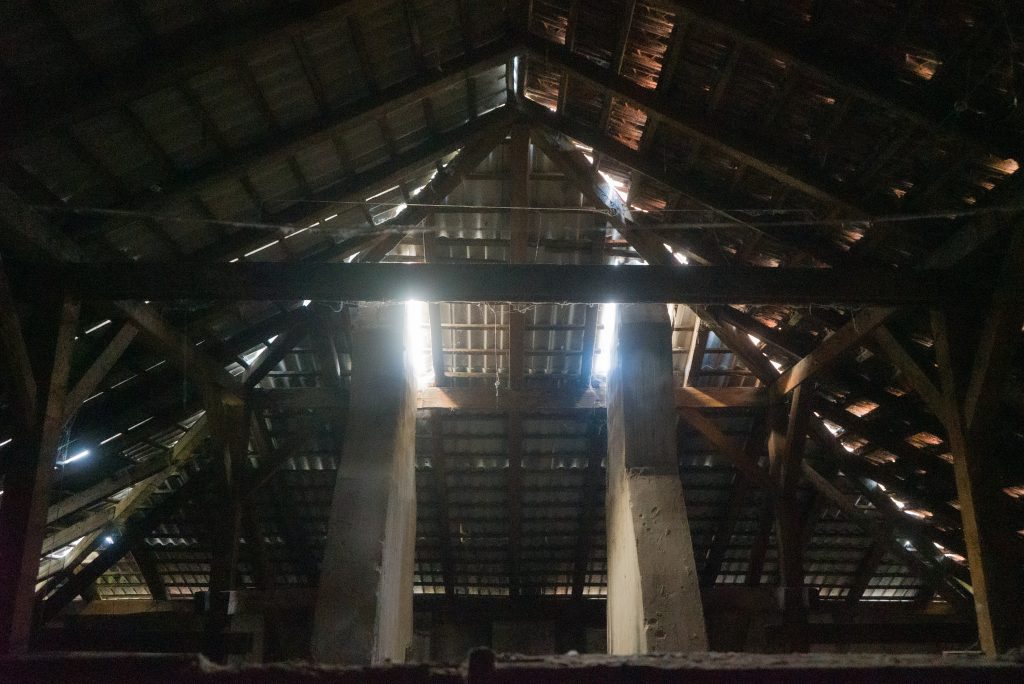 The members of the church community helped to make this building suitable for living. They did renovation work with their own hands and resources. Of course, the shelter still has many technical issues, but one could see that lots of things have been done.

The bathrooms look perfect. All the equipment is new and shiny here. These are small things, but in  the background of the ‘antiquity’ of the whole building, they strike an eye.

Every floor has a kitchen and bathrooms. On the ground floor, however, showers and toilets are located in one room. The cabins are separated by curtains, which is not very convenient. Some people, when they use the shower or toilet, lock the whole room – note, there are 50 residents in the shelter. However, there is hot running water everywhere except in the sleeping rooms where the pipes are old.

From the second floor, the stairs lead to an attic. To draw kids away from it, Andriy the headman created a story about Count Sheptytskyi who lives in the attic. But children were interested in this restricted space anyway, that’s why the entrance was blocked with an old table.

We go upstairs to have a look at the roof. Andriy says it is leaking and when it is raining, it is dropping in the rooms. To see it for yourself, there is no need to wait for rain – the cracks are above your head. 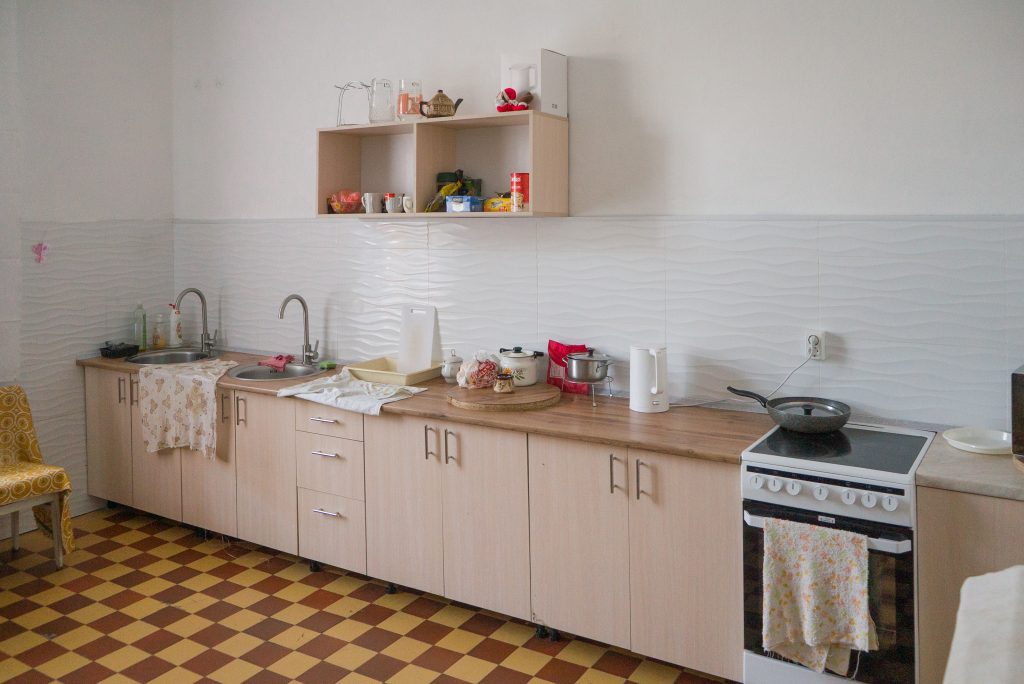 When asked about whether people plan to stay in the shelter for winter, Andriy’s mother Valentyna says: “Borodianka is destroyed. This is a grave. Is it possible to live in a grave? It scares me”. Later that day she continues: “The buildings in our town are in critical condition, but some people came back to Borodianka, moved in and live there. Because they have no place to live! The walls of those buildings have cracks, and how is it going to be in winter? The houses could fall apart. It is a risk”. And this is Borodyanka which was liberated from the Russians on April the 1st, and what people from Rubizhne, Druzhkivka, or Volnovakha could say?

People are preparing themselves to spend winter in the shelter. In the old times, the building had its heating system, but one cannot count on it now. The residents say the representatives of the city administration have already visited the shelter, studied the building and promised the heating will work. But this is a complex problem. A large part of the windows are old, they blow through, and this circumstance worries people too. 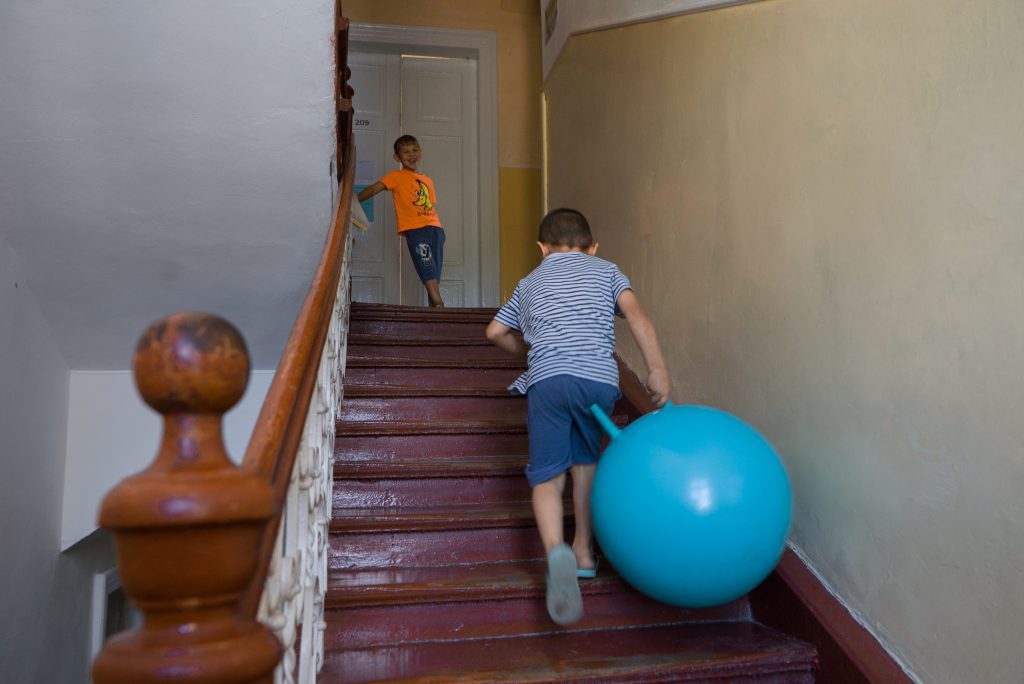 As in every shelter, the employment issue is in the air here, as well as the need for a kindergarten. The question with the latter is only partially solved. There is a kindergarten “Yanholiatko” run by a church community, but it works only two or three days a week. So, it is and it is not. Nobody knows for sure what the situation with this kindergarten will look like in the fall. And for the moment, as Andriy says, “women with kids don’t work because they are with kids – and we have many of them”.

Some people are employed, but rarely by their occupation. “I work now at the construction site, with concrete. I used to work with roofs, steel structures, and fences at home”, says Yuriy from Rubizhne.

Humanitarian aid helps people to hold up well. The church and different volunteer initiatives help with food. Important support comes from the STAN NGO. “The town council attracts donors that can provide help for once. But with STAN it is constant work. This organization helped us the most to supply shelters with humanitarian aid, beds, hygiene items, – to react on quick requests”, says Solomiya Zinets-Matsyshyn, the coordinator of shelters in Kolomyia and the head of Trykutnyk’ NGO.

In Kolomyia, STAN works with two shelters opened by the town council. It provides not only food, hygiene items, and mattresses but also psychological and legal support, and organizes psychosocial work with children.