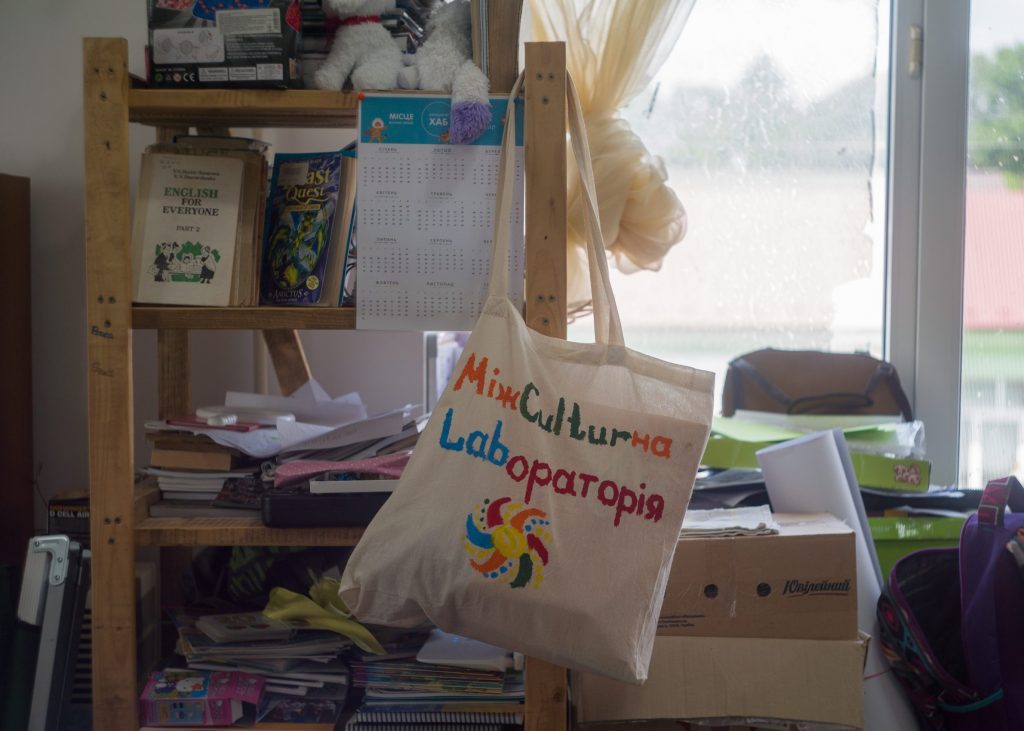 When people who escape from war are trying to find a place to move and stay, quite often they search in Ivano-Frankivsk or smaller cities in the region like Kalush or Kolomyia. Not everyone is willing to move to a village. And how does the life of forcefully displaced people look in the rural areas? To show this, let’s have a look at a small Miculab shelter in the village of Lysets, near Ivano-Frankivsk. 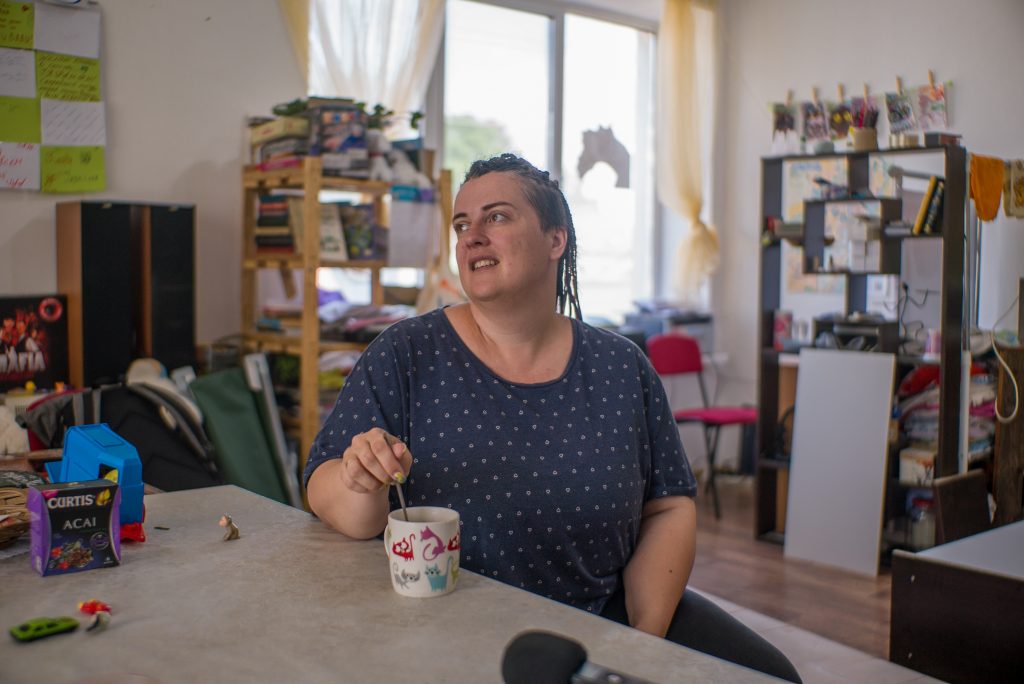 This shelter was founded and is run by Olha Oleinichenko. Most of her friends know her as Olha Tut, where “tut” means “here”. So, Olha Here. Why? Because she is here. Olha is also an internally displaced person, she came from the town of Yasynuvata in the Donetsk region in 2014, when the war started.

After living in Ivano-Frankivsk for two years, she moved to Lysets. Here, in the village, she became a native. Olha has a small farm where she breeds goats. She also became an active member of the village community and started an initiative called Miculab, meaning intercultural laboratory, planning to open an educational center here. Olha rented a space in the center of the village and found teachers.

But on February 24th, the war started for her for a second time. And much worse, on a much bigger scale than in 2014. With the support of STAN NGO and other people she started a shelter for IDPs in that very space. The educational center here will be opened one day too. But in the spring of 2022, the priority was to provide shelter for people who fled from war. 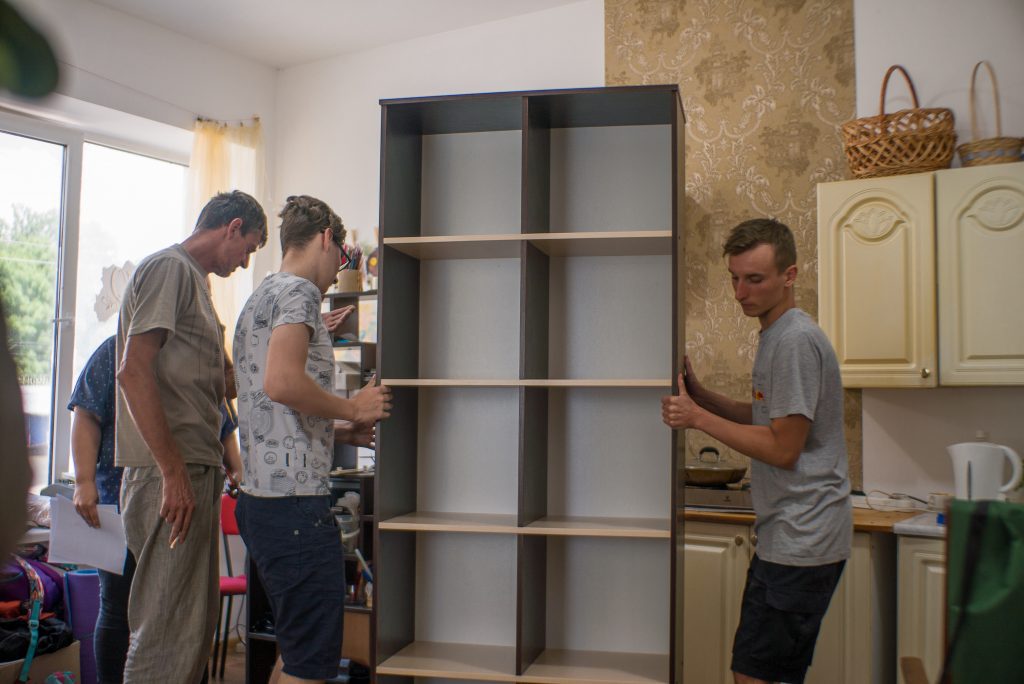 This is a tiny shelter that can host up to 20 people. However, 20 will be already too tight as there are just three bedrooms and one common room that serves also as a kitchen. This circumstance has some advantages. Olha says the shelter lives as one family. As a coordinator, she understands people’s needs. She knows to whom she can give the clothes she does not need, and those clothes will fit, she knows what event to suggest for people to attend, with whom to connect the shelter’s residents.

The problems they solve together. “I have no secrets about our financing or humanitarian aid. I always say it as it is. If there is trouble, I gather people together, and try to engage them in problem-solving. They also help with the administrative work: sorting things, cleaning the yard. We live as one family, doing everything together”, says Olha.

“Comfort” and “discomfort” are combined in the shelter. On the one hand, the atmosphere here is really warm. Everyone is occupied with some work. People don’t complain but try to arrange their mode of life the best as they can. On the other hand, the space is limited, and it’s impossible to provide each family with a separate space.

“I try to allocate them in such a way that people would feel comfortable. In the first room, an elderly lady with her granddaughter and another woman with her daughter live. I call it a “female room”. Another room is “teenagers’” one. There are two mothers with teenage kids, who became friends with each other. There is also a room where just one family lives”, says Olha. 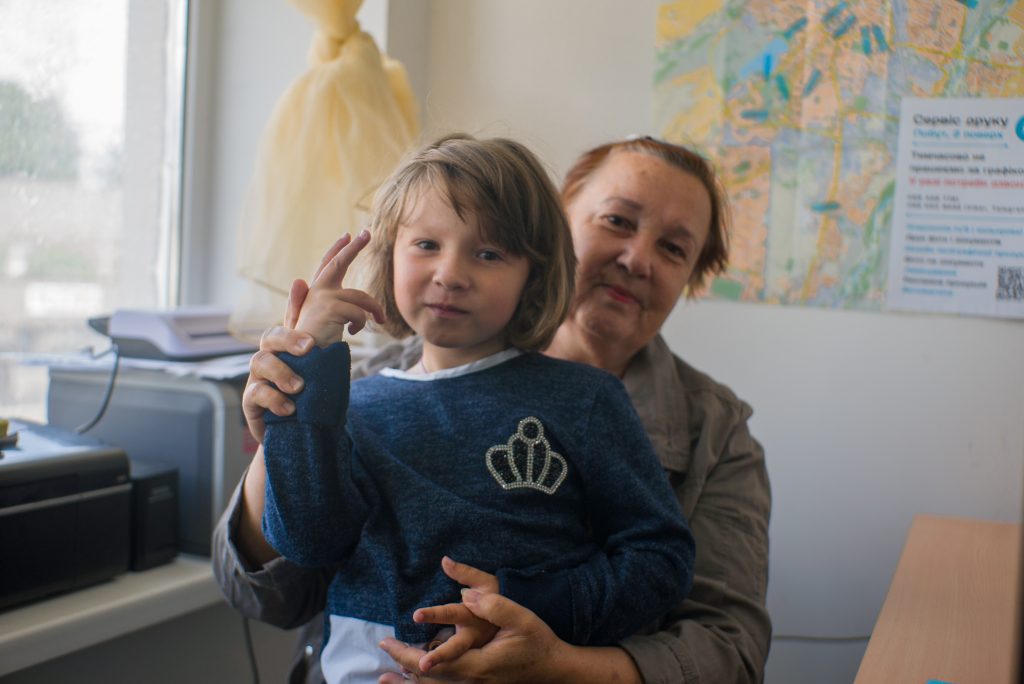 An elderly lady with a granddaughter is Liudmyla Oleksiyivna and a 5 y.o. Marichka. They are from Slovyansk in the Donetsk region, and arrived in March when the shelter has just opened. So they are old-timers here.

“There is a shelf, and everything that is on that shelf is brought by volunteers. Hygiene things, toothpaste, toothbrushes. They give toys. The church used to provide grocery baskets when we just arrived. There is also a local market in Lysets where we can buy homemade dairy products. But the main, the most important thing is that it is quiet here. This is really a shelter, it calms my nerves. It is so serene here, and there is shooting and shelling. I don’t want to traumatize my granddaughter, so I decided to stay here until it is calm there. There is terrible fighting: aviation, heavy artillery. There is no water and no electricity”.

Many people search for a flat in the city, but rural areas give many advantages. Life is quieter, and there are already mentioned farmers’ products. There are shops, a polyclinic and kindergarten in Lysets. However, the latter is also a shelter now and Liudmyla Oleksiyivna is worried that her granddaughter lacks communication with kids of her age. She hopes in September the kindergarten will be opened again and Marichka will be able to attend it.

“She needs communication and also she needs lessons. In Slovyansk, she attended a kindergarten. She knows about lessons, mornings, and concerts. Some children say they don’t like kindergartens. But when Marichka went to a kindergarten for the first time, I asked her how it was and she said she liked it so much because there were so many children”.

The city can provide more entertainment for children, that’s why they often go to Ivano-Frankivsk. They visit parks, playgrounds, and also they went to a children’s entertainment center. 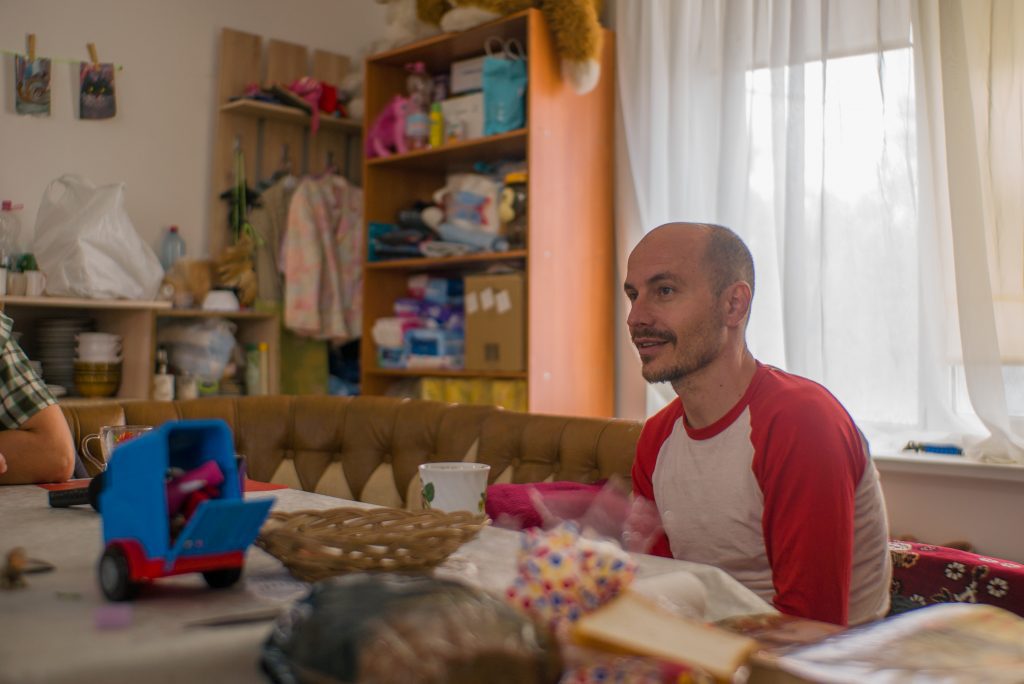 It is summer now, but people who live in the shelter realize they could stay here for winter. Miculab is originally an office space. That means it does not have running hot water and the heating system is not good enough. In March when it was cold they used simple heaters, but this is not a good solution for winter frosts.

As for the hot water, there was a small boiler in the shelter, but it got broken and currently people are trying to satisfy their needs with what they have. “We boil water in electric cattle and pour it into a small bath. I put my granddaughter into this bath and wash her. Adults go to take showers at the music school. There is a shower unit and hot water, they allow us in”, says Liudmyla Oleksiyivna. Also, the residents of the shelter set an outdoor shower for the summer. However, the issue with the heating system will become urgent very soon, in a few months.

Olha Oleinichenko says using gas for the heating will not be an option. “Using gas in heating facilities will be too expensive, to have safe and money-saving heating we need to think about electricity. The way we did it in spring was not good. It was chaotic and with constant fire danger. We need to buy more cost-effective electric radiators, with the installation it might cost around 30,000 UAH”.

Shelter’s needs don’t end here. There’s a lack of beds, so people sleep on the mattresses put on the floor. This is very uncomfortable for elderly people. Also, there’s a constant lack of bed-linens, and many more small things are needed like reading lamps for school students.

Fortunately, not all shelter’s needs are “fire-fighting”. There are also positive worries. Olha with the shelter’s residents is thinking about starting some social enterprise, for instance, making dumplings or cooking sauces.

And there is a strong need in kindergarten. Nobody can guarantee the local kindergarten will resume its work in autumn. And it’s a long time till autumn. “Forcefully displaced people are being said “go and work’, but what if a husband is fighting on the frontline, and a wife stays with the kids here? What if they don’t have relatives to babysit the kids? We think we could organize a small space for children. We don’t know yet how it may look like but such an idea has emerged”, says Olha. 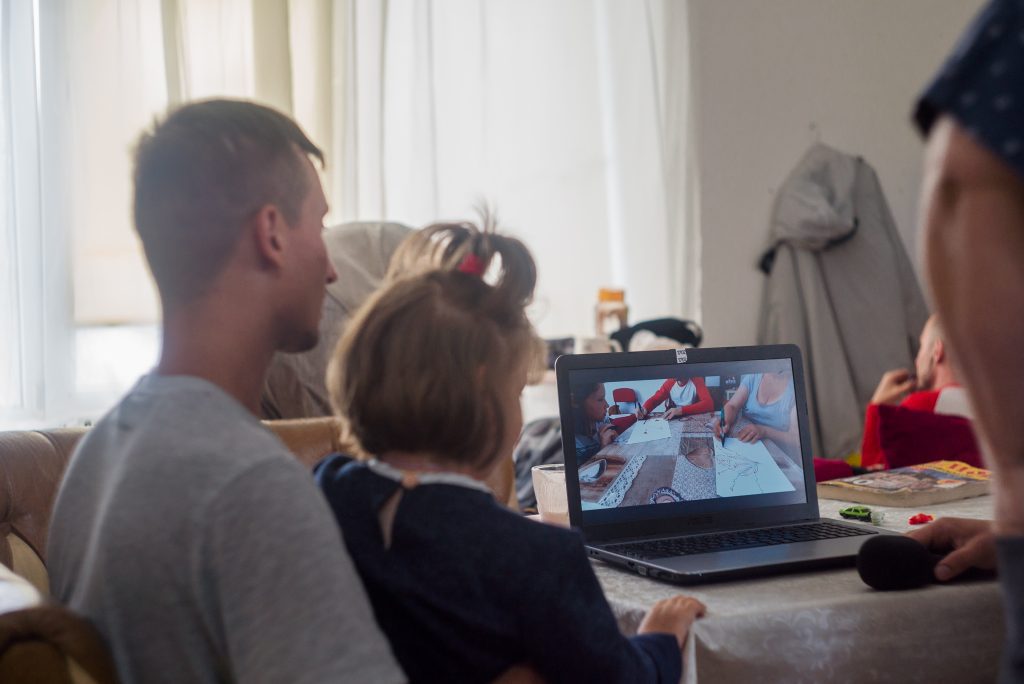 Even though the author of this text visited the shelter in June, when many people have already come back to Kyiv and other regions, the shelter currently has the largest number of residents at all times of its existence. All the rooms are full and three people temporarily live in a common room (also a kitchen).

It is lively here. Someone is studying, preparing for the university entrance exams, somebody works at the university and is giving a lecture online. Two people are assembling a bookshelf that the shelter has got thanks to the cooperation between STAN and an international NGO Save the children.

Tomorrow is Saturday. Shelter’s residents and locals are going to visit Stara Huta village in the Carpathian Mountains. With the support of STAN Olha rented a big bus, so they will have a retreat in the mountains where locals and displaced people could socialize. Such communication is important because all of them are now one community of Lysets village. The situation will change and some people will come back to their regions, but some of them will stay, like Olha Oleinichenko did in her time. No matter what will happen in the future, now all of them represent one community and have to communicate, help each other and unite for common goals.