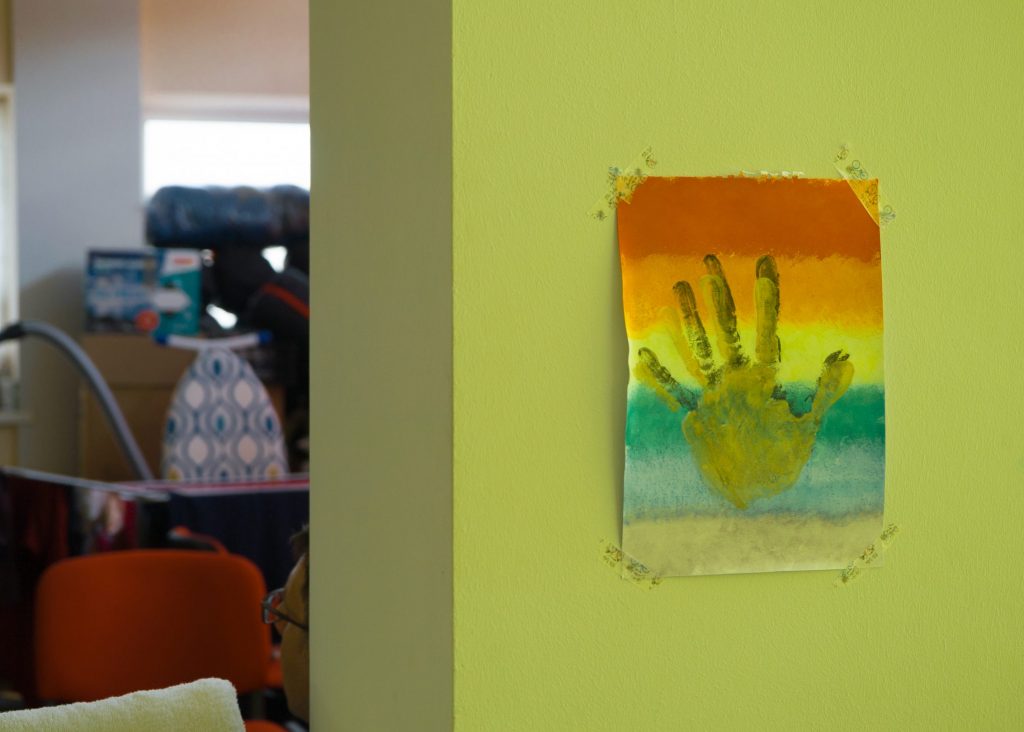 People are different, values are common

A full-scale Russian invasion forced millions of Ukrainians to leave their homes. They had to pack their belongings and leave behind what was dear to them, without knowing when they would be able to come back, and whether it would be possible at all. This is hard for everyone, but vulnerable social groups face additional difficulties. Society is not always open to the representatives of the LGBTQI community, that’s why a shelter for this particular social group was opened in Chernivtsi. How it lives, and what challenges it faces – in this text. 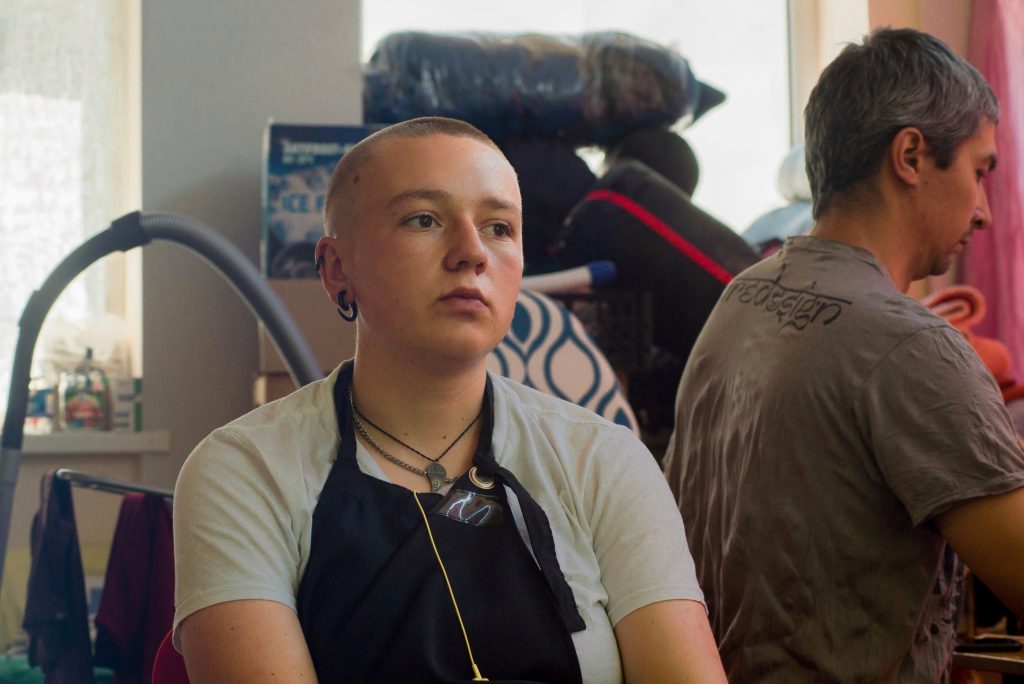 Sasha is a transgender person from Odesa.

Sasha is a very positive person. He says on February 24th, one of the funniest stories in his life happened. Everyone was running around in panic that morning, but he was stubbornly going to his workplace at 6 AM. He got phone calls: “We are being shelled from the sea!”. And Sasha replied: “Today is my first day at this job”.

He did not reach his job that morning. The place did not open that day.

The first days of the war Sasha and his partner spent in Odesa, but in the middle of March, they finally decided to move to Chernivtsi. Why there? His friends told him about a shelter for LGBTQI and LGBTQI-friendly people in that city – a temporary home where no one gives you a dark look, no one asks dumb questions and no one startles. 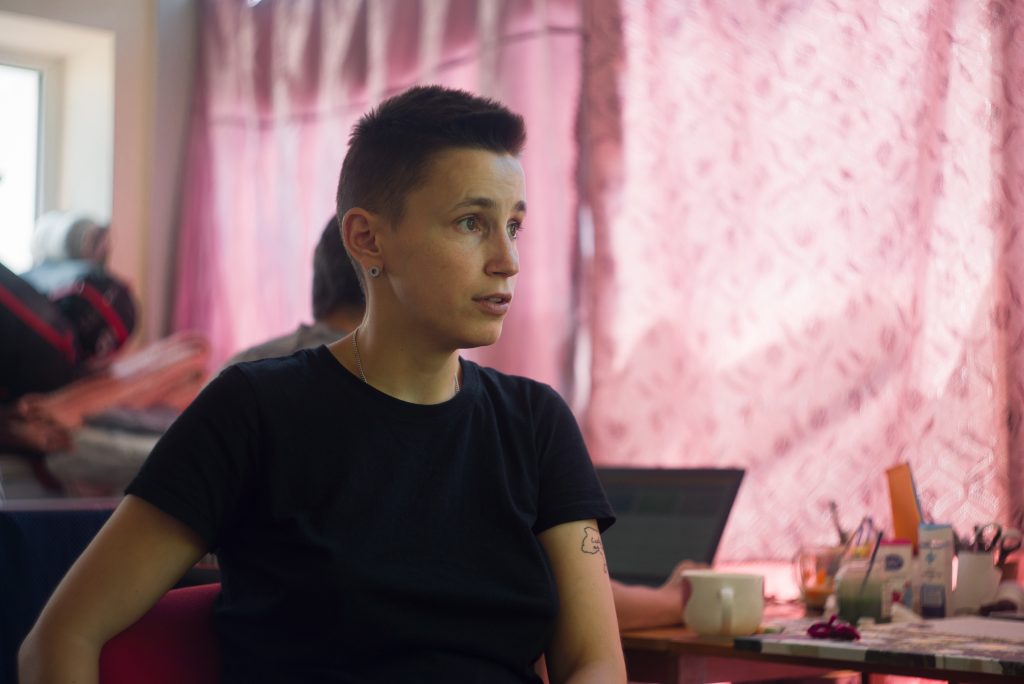 Sasha tells he recently went to Kyiv to do some errands and stayed in a similar shelter. “Trans people have always been treated with resentment. From looks of disapproval and offensive words to physical actions. I won’t risk going to a place where I very likely won’t be accepted. Young people is one thing, but those of the old-school, Soviet minds… I understand if I get to the wrong place, I might not get out of it. And if I get out of it – I likely would be on a stretcher. I don’t need more traumas. In the shelter, I’ve got my safe place. And when you are on the streets, people don’t care how you look and what you wear”.

On the other hand, it is not that bad in Chernivtsi. Olena Hryhoriak, shelter’s coordinator and also a coordinator of a regional office of the Insight NGO, said the shelter has faced neither aggression nor menace. 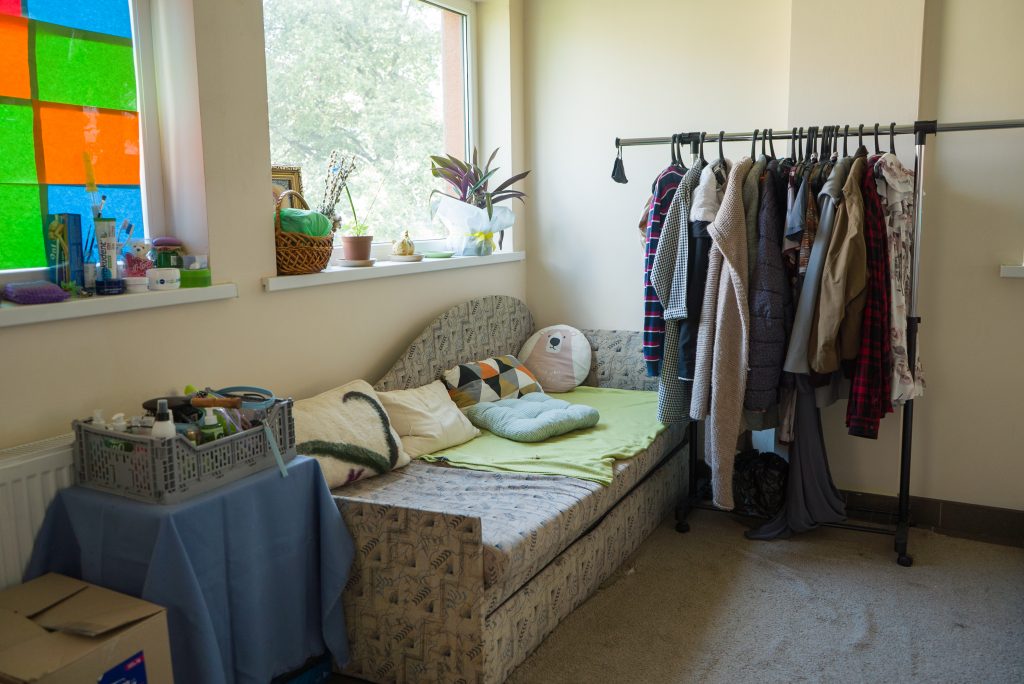 The space for the shelter was rented at the beginning of March. From the first view, it fits more for an office or a commercial space. A large hall, large windows. It could be cold and lifeless here, as in the paint shop in the basement of that very building. But it is a very cozy space. The furniture, flowerpots, and small details of the interior give it a  cozy atmosphere.

Olena says, in the beginning, the place was empty. No furniture, no kitchenware. Everything that is in the shelter now – from bed linens to drinking water – is a result of the common efforts of STAN and Insight NGOs, partners from Romania, volunteers, and shelter residents.

STAN has been together with the shelter in Chernivtsi since its foundation. “They help to buy food and partially – medicine, sometimes baby food and diapers. They gave us sleeping mats, sleeping bags, flashlights, power banks, and backpacks for displaced people. When we have some need, we ask whether STAN or Insight could help, and mostly in tandem they provide everything”.

Olena shows us the shelter’s household. The shelter has got all the essentials. There is hot water, a washing machine, a stove, a microwave, and an electric cattle. The apricot jam is boiling in the kitchen. Anna cooks it. She says children like it with milk. She also takes care of flowers in the shelter. You can see she worked hard to make such a comfort in the shelter. “I’m happy with everything here. I feel good at this place, and I will always be grateful. But I want to go home. Everything is better at home. At home, it’s always better”, Anna says. She is from Kramatorsk. 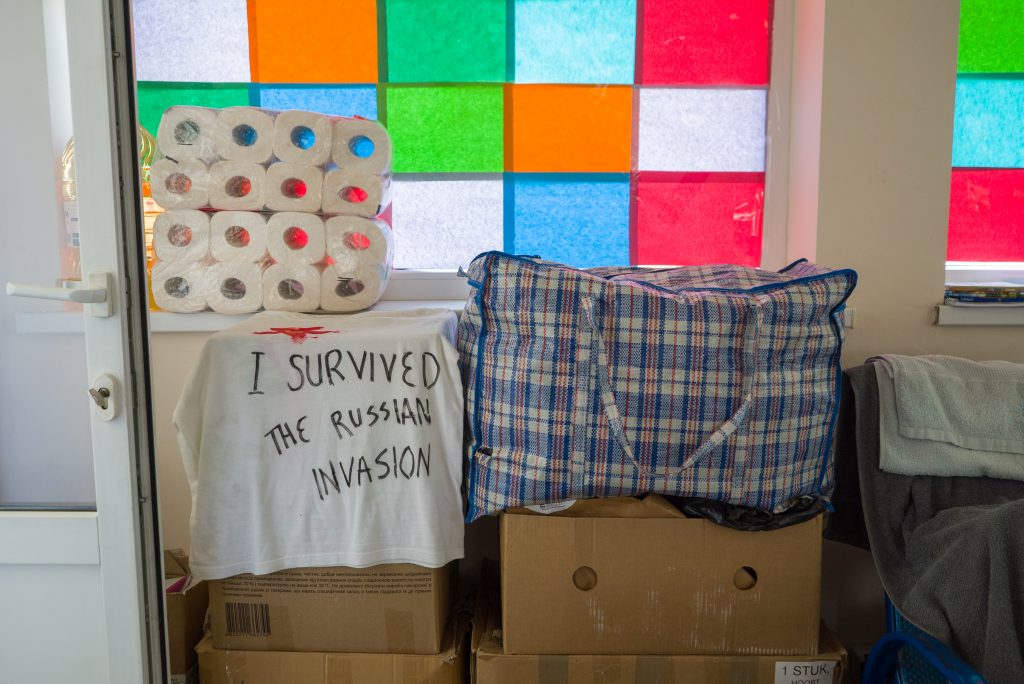 Anna works in a cafeteria nearby. Sasha and his partner are working in that place too.

Looking for a job is always a challenge for IDPs. The shelter’s coordinator and residents all agree on this. When asked about the main difficulties and needs, Sasha comes back to the same long-standing problem: “The biggest need is mostly getting help in finding a job. For three months, we had nothing, and my current job is not stable. What one earns here a day is not enough. Some courses where people would learn and get new skills would be helpful”.

Olena also puts the employment issue in the first place. “The most important thing for the internally displaced people is to find a job so that they won’t get out of practice. People have to understand they need to count on themselves, in case a shelter would be closed or something else would happen, they would not be left with nothing. It is difficult with the jobs. Someone has a disability so there is a need to look for a specific job, another one cannot stand for long, etc. And in the beginning, employers were not very enthusiastic about hiring displaced people, because they could come back home soon. We’ve had such discrimination”, Olena says.

There are also cases of discrimination for belonging to the LGBTQI community, Sasha adds. At the same time, at his current job, he explained to the employer he is a transgender person, and the employer took it well. He was told not to worry. 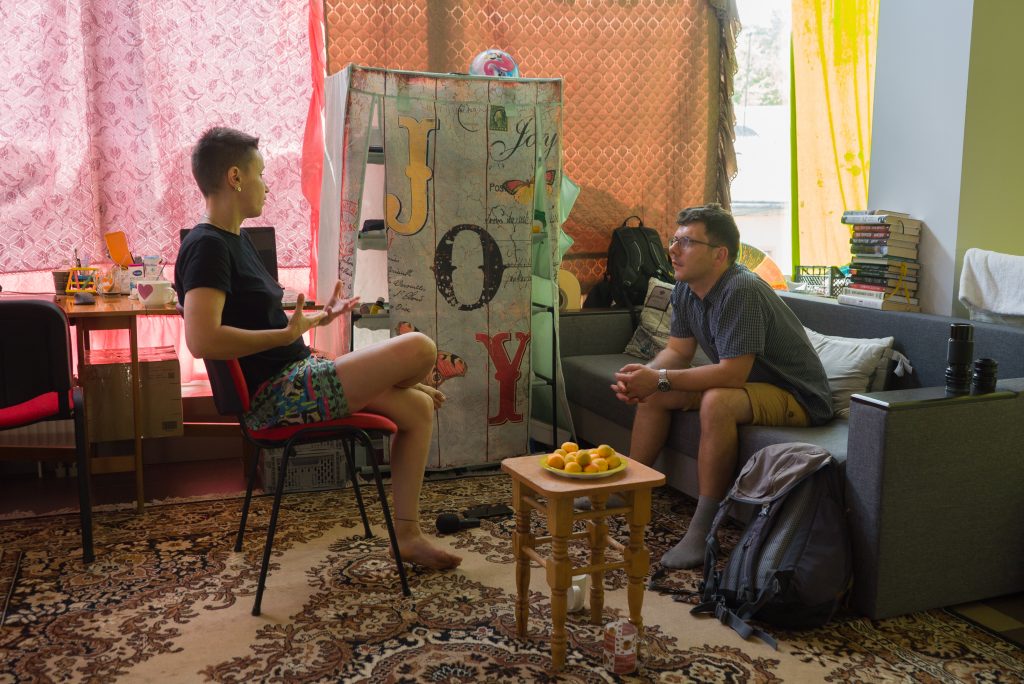 It is important to remember that employment is not only a source of income. “People need to fulfill themselves. They cannot just stay day by day at a place, not changing anything. We consider this a social disability. A person becomes disoriented, dependent on somebody, and cannot provide for him/herself. A person needs crutches to rest on: that somebody pays for something, or solves the problem. We are trying to work in a way that people won’t lose their identity, that they would develop themselves, and keep interest in something”.

For this reason, the regional office of the Insight NGO organizes lectures, educational events, and film screenings. Everything that could be interesting for people and that allows them to communicate with each other. “We try to make this inclusion, to include different social groups in a common life”, says Olena. “We don’t divide homo and hetero. We unite people for common values: respecting each other, diversity, awareness of human rights, and awareness that homosexuality is not air-communicable. Such prejudices make life miserable.

If a person retreats into him/herself, and stays within four walls, it is harder to leave through the difficult times. On the contrary, here people have a chance to get out of the shelter’s “bubble”, to communicate with other forcefully displaced people, and with locals. They have a chance to integrate into the life of the city that became their home now. Of course, some will stay, some will leave. Sasha assumes he will come back to Odesa soon. “As I know mine and my partner’s impetuousness, we could one day pack our things and come back to Odesa. There is a thing when you stay in a city for a year, that means you will not leave it at all. You stick to it like a squid. However, we don’t want to live in Chernivtsi or another city. That is not the case of Chernivsti or any other city. That is the case of Odesa, it is like a mother to us”.

Two reminders. For an epilogue 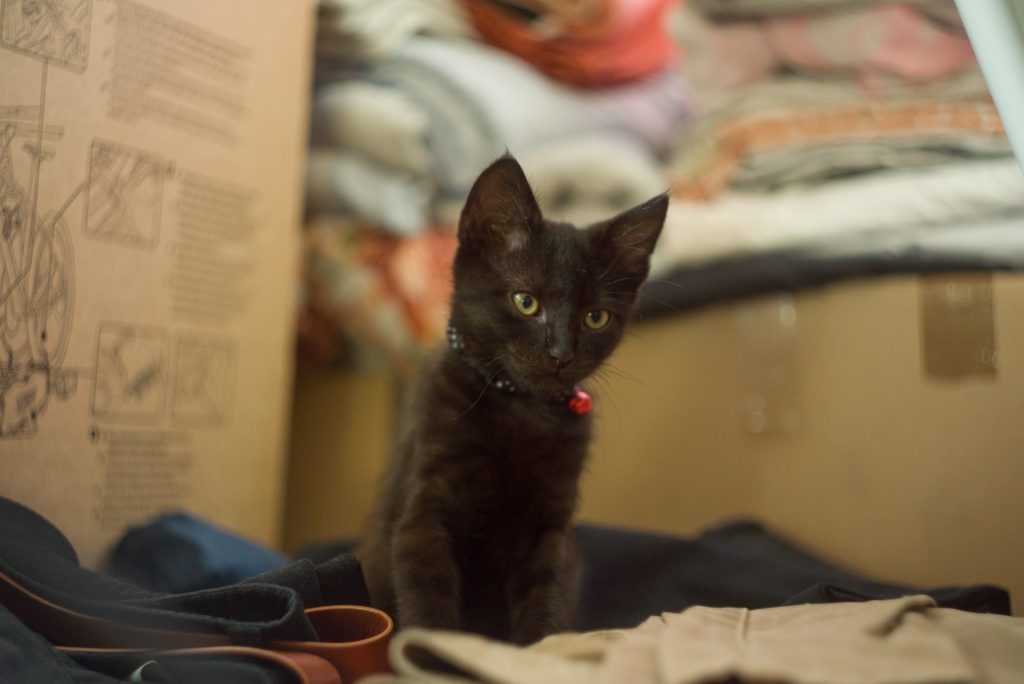 The first. There is a cute and very tiny cat in the shelter. The residents adopted this homeless cat. I asked about its name, and the answer was “Marik”. At first, I thought it was a diminutive of the male’s name Marko. And then I remembered this is also a diminutive of Mariupol.

The second. At the end of our conversation with Olena I noticed a tattoo on her shoulder. It was a contour of Ukraine’s map and the words: “Glory to Heroes and Heroines!”. Olena says it is a gift from her friends. “They asked if I don’t mind having a memory about territorial integrity and sovereignty of our country. And also a memory due to whom we can have a conversation like this”.

Kolomyia. A House Next to a Church