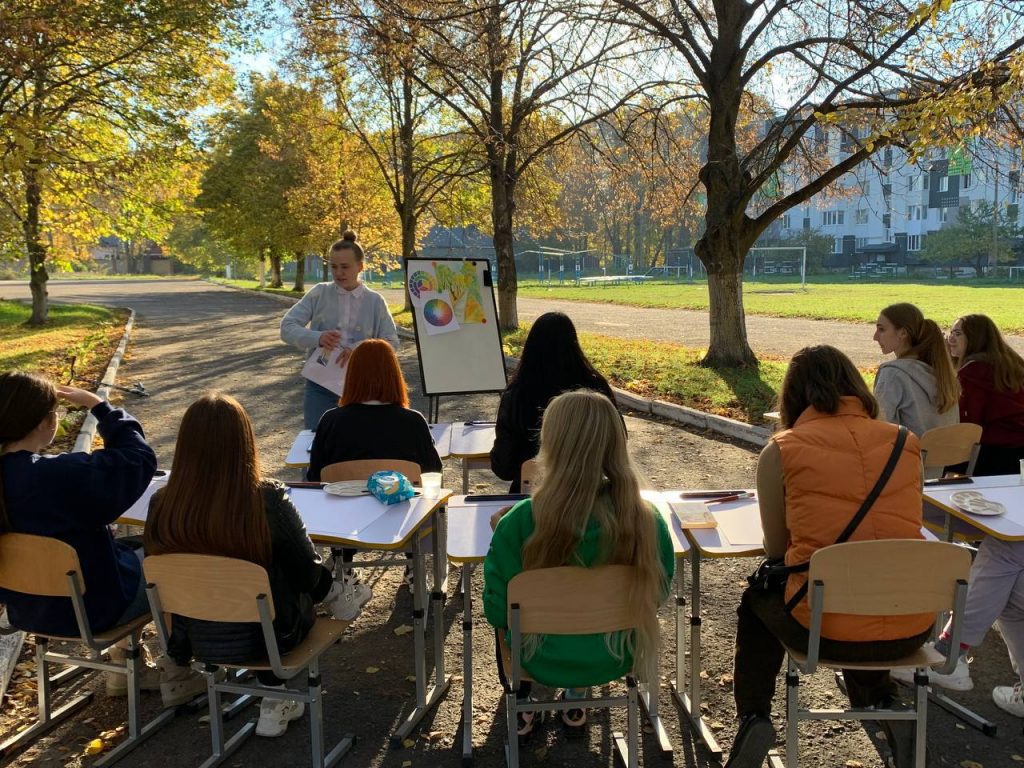 Small Initiatives For a Big Purpose

In the fall of 2021, STAN Youth NGO celebrated the International Peace Day with events in 15 Ukrainian cities. Workshops and theater plays were followed by discussions, and most importantly – the Open Dialogues, where STAN members applied their methodology for the first time.

The organization did not hold Open dialogues for Peace in Ukraine since the full-scale Russia’s invasion. Instead, it supported more than 20 initiatives that contributed to the dialogue between the internally displaced persons and the locals. Why has STAN taken such a decision, and what initiatives it has supported – in this text.

STAN involved more than 50 people from different organizations and regions of Ukraine to organize Peace Days 2021. Apart from the main goal – Open dialogues for Peace – these events helped to meet and rally the participants, which played a huge role after February 24th. Someone had a space to organize a shelter, someone found resources to provide the space with furniture, household appliances and food. Together people managed to react quickly and efficiently to the challenges of war.

In 2022, STAN did not organize similar events, did not run Open Dialogues for Peace. Such discussions could cause different reactions in Ukraine, and many would argue it’s not a good time for them. The very phrase ‘dialogues for peace’ Ukrainians understand differently, and controversies on this ground are unnecessary today.

Instead, STAN Youth NGO has worked on another path to dialogue in the society. Together with the partners IM Swedish Development Partner, Child Rights Eurasia and Polit-Forum Bern in cooperation with the European Cultural Foundation it supported 17 initiatives that facilitate integration of the internally displaced persons into their new communities.

For instance, the Patch creative studio in Ivano-Frankivsk started “Sewing Art Therapy” workshops. Locals and the internally displaced persons who suffered from the war, had a chance to learn how to sew, and at the same time to communicate, to support each other. In the city of Volodymyr, teachers and students of the lyceum # 5 organized a youth training “To find a place in life one has to learn to choose”. It became a ground for self-development and communication between the locals and the internally displaced persons.

Uliana Us and Daryna Lysiyuk, members of the Space VV NGO, from the lyceum # 5 in Volodymyr organized a similar project – a series of workshops called Art-studio.

Thus, students decided to organize a series of drawing and painting workshops and design them in a way that would be not only creative work but also an opportunity to meet other people.

‘Children made friends. I remember one story. There was an internally displaced girl and a local girl. Both were 8 y.o., both love gymnastics, they even look alike. They met at our events and became friends, and started coming together for the following activities. We have many stories like this one,’ says Uliana Us.

Sofia Malyha with her mother left occupied Kakhovka city in April this year. They now live in Bakosh village in Zakarpattia. Sofia, together with the local activists, decided to push locals to talk about their vision of peace today and before February 24th.

Participants recorded their reflections on video, and chose photos they associated with peace. Then, on a scheduled day, they gathered in a youth center to watch the videos and exhibition. This event helped people with different experiences to understand each other better.

‘After watching the videos, many locals understood that things are sometimes not as they imagined them. Until that moment, they did not communicate with the internally displaced persons who had experience of living in the basement or under the occupation… We planted a seed and people started thinking they need to value what they have now, not complaining about how bad things are. One needs to appreciate that period of peaceful time he or she has right now’, says Sofia.

A Solidarity Cafe was opened in Ivano-Frankivsk, on the premises of the public sorting station Re:Space. On Saturdays in October and November from 2 PM to 5 PM anybody could come and enjoy free food, but most importantly – to meet people, share ideas and find like-minded people.

“There are many new residents in the city, I’d like to support them, to engage the internally displaced persons. So that they know they can come to our space on Saturday and have some rest. Maybe, to meet someone or to hear interesting things about Ivano-Frankivsk, about what’s happening here”, says Iryna Maksymliuk, the cafe’s and Zero waste Ivano-Frankivsk NGO co-founder.

Mykhailo Veklyn, a Solidarity Cafe initiator and Zero waste NGO head, has seen such a cafe in Berlin. To create a similar space, they needed to buy kitchen supplies, tables and chairs, to pay cooks. Part of the expenses Zero Waste NGO covered by itself, and part – with the support of STAN Youth NGO. This allowed the cafe to start on October, 15th, 22nd and 29th. After that they had equipment, and since the idea was warmly taken by the public, local socially responsible businesses supported it. Thereby, the Solidarity Cafe was opened every Saturday in November. In winter time, due to the difficulties with the heating, the cafe will be on pause, but in spring will be reopened again. It’s important for the organizers that this place would be a platform for communication, sharing ideas for eco and other initiatives and would help the internally displaced persons to integrate into life in Ivano-Frankivsk.

“I’ve seen many internally displaced persons visit us. A young couple from Kherson said they have had a sorting station in the city too, and they wanted to have a look how it works in Ivano-Frankivsk. A girl from Kharkiv said she liked our approach. She compared ours with a sorting station in Kharkiv, and said they could adopt our experience and practices’, says Iryna Maksymliuk.

In the city of Berdychiv in the Zhytomyr region, people cook dry food in the local library. They make ready-to-cook soups and borscht, pastyla, ‘vitamin bombs’ made of nuts and dry fruits, and also teas. All of these goes to the defenders on the frontline.

The employees of the library and the members of M-Formation Youth center based in the library, have been making dried food since spring. At first, someone from the team brought an electric dryer from home. In June, they bought a professional one and from the simple teas moved to making soups and borscht. Local farmers supply them with the necessary products.

With the support from STAN, they bought two more powerful dryers and other necessary kitchen equipment. Their work has become systematic. “We even made a schedule and every day we wash and grate products, and then they go in the dryer. Then you have to keep an eye on it: to mix, to turn over so that it won’t burn up or dry up too much. And then we pack and send it’, says Inna Kulish, M-formation youth center coordinator.

The project is not limited just to producing ready-to-cook food. The team also held a webinar about making dry soups and pastyla followed by several entrepreneurship trainings that provided participants with the basic skills to start their own business, and became a good reason for the locals and internally displaced persons to meet.

Now this is a volunteer initiative, but there are plans to develop it into a social entrepreneurship later. Today this volunteer work is important both for people who receive the food, and for those involved in the process of making it. ‘The collective emanated a spirit of fortitude and belief in their work, and I couldn’t help but join it. There is always some work, and when I understand where this goes, I feel even stronger and time passes faster’, says Victoria Safronova.