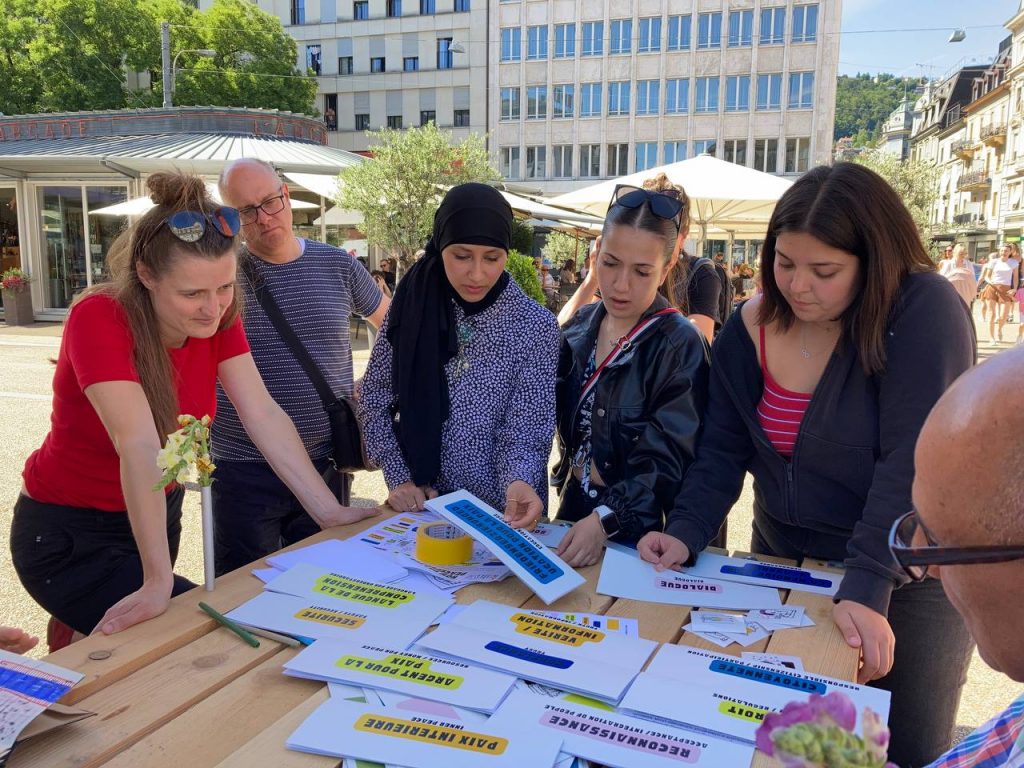 Talking to Your Folks: Open Dialogues for Peace

Fleeing the war, millions of Ukrainians came to Europe where they got an unprecedented, as for refugees, help. At the beginning of the full-scale invasion, one could expect it was going to end soon and people just needed to wait for some short time in a safe place. Now we see it is not only about today, but also about tomorrow and the day after tomorrow. We see that we and Europe will not only live next to each other, we will live together. And people who live together have to communicate, because when you don’t — it’s a half step to a conflict. We need to talk in a common language, drawing on common values, for common good. This text explores what STAN Youth NGO is doing to achieve this.

The war in Ukraine, provoked by Russia and Russia-backed separatists, started in 2014. Deaths, cities and towns destroyed, people lost their homes and became refugees and internally displaced persons. In February 2022, Russia attacked on a full scale. Its missiles hit Ukrainian cities, its army started an offense along the mutual border, including from the territory of Belarus.

Being an educational and human rights organization, since 2014, STAN has to react more and more to the challenges the war creates. “We, as civil society activists, cannot influence the military operations. But we can influence the society and support people who were forced to move or came back from the frontline and need reintegration. Or people who are not included in the community like Roma people, LGBTQ people. Before 2021, I was sure we were not working on peacebuilding. Until I went to study, until I was shown books and was told: what we are doing is a peacebuilding’, says Yaroslav Minkin, co-founder of STAN.

Back in 2014, STAN members started to think on how to talk about building a sustainable peace, about things that come after the fighting ends. ‘It’s impossible to build peace in a community simply when people don’t shoot at each other. We talk about peace as social cohesion: when the members of the community are united, when they influence the decision-making. However, it’s impossible to build a strong community when you have excluded and marginalized people’, says Minkin. ‘It’s also about the conditions the next generation is growing under. It either sees that everyone has a possibility to develop his or her talents and become whoever person she or he wants, or a society dictates who will be able to become successful and who will have no chance’, adds Yuliya Liubych, education coordinator at STAN.

Thus, STAN started organizing dialogues about diversity, mutual understanding, engagement of the marginalized groups in the society. It was a movement from rather intuitive attempts of discussing the difficult topics to building a methodology of such communication. Consequential steps, and at the same time – a search process, a process of cognition.

STAN currently has a well-developed and tested in different communities methodology of an Open Dialogue for Peace. Its basic tool is a facilitation kit, a sort of board game. It was designed by Minkin and Liubych and is based on a book by Enver Djuliman ‘Reconciliation: Directions along the Way’. The kit helps educators and activists to apply the Open Dialogue for Peace methodology in his or her community, at school, among colleagues and partners.

There is negative and positive peace. The negative one means there’s no war, no shooting. The positive peace is when there are no preconditions to shoot. During the recent years, STAN NGO organized Youth Peace Days in Ukraine and dialogues about how to build a positive peace in the society. This line was interrupted in 2022 (it was replaced by initiatives we will tell about in the next longread). It’s hard to talk about positive peace when you have to hide in a bomb shelter every day.

Instead of this, STAN started organizing the Open Dialogues for Peace in Europe. There are many refugees from Ukraine, who were unprecedentedly hospitably hosted, were given opportunities to work, to exercise social benefits and to receive welfare payments. Europe has helped a lot, and continues doing so. But the first ‘romantic’ wave of support will be decreasing, gradually and inevitably. The routine has started. Some Ukrainian refugees will stay in Europe, and we cannot say for how long. They need to integrate into new communities, learn languages, and build relationships in a new, though temporary, home. There is a need to learn how to live together. And here communication is the best vaccine for troubles and animosities.

STAN’s partner in organizing Open Dialogues for Peace is a Swiss organization, Polit-Forum Bern, that shares the belief that important topics need to be discussed not only on the expert level, but also among the ordinary citizens.

The first and perhaps the most attractive were the Open Dialogues for Peace in Bern and Biel cities. They took place at a large table on wheels. The organizers were moving it along the streets, and residents, locals as well as newcomers from Ukraine or other countries, sat for a talk. It was a successful combination of a performance and a meaningful dialogue due to the methodology of STAN.

Artists Masha Vyshedsky, Perla Ciommi and Amélie Cochet joined the dialogues in Bern and Biel. They drew their reflections on what they observed. The exhibition of these works called ‘The languages of peace’ was shown in Bern from the 5th of September to the 8th of October, and now it will be repeated in November and December. Next to the drawings, the exhibition also showed the cards from the facilitation kit designed by STAN.

A deputy director of the Polit-Forum Bern, Stefanie Schüpbach, who curated ‘The languages of peace’, says the images add to the verbal discussion: ‘I also think the drawings are a good way to transmit the topic of peace (what is needed to live peacefully together) on another cognitive level than just speaking or writing about it’.

Masha Vyshedsky, an artist from Bakhmut, Ukraine, talks about the importance of communication as it is, and that sometimes these dialogues have wider context than it seems: ‘I was going to Bern in a mood it is too early to talk about peace. What sense does it make when we have a mad neighbor and whatever we do, no matter how open-minded we are, — it is attacking, we are anyway at threat. Later I understood, it probably was not only about peace. It was an invitation to a dialogue. We started from it and moved to something else’.

The Open Dialogues in Kassel and Prague

Similar dialogues took place this summer and fall in Prague, Helsinki, Tbilisi, Kassel in Germany and Kristiinankaupunki in Finland. In Prague, for instance, the Open Dialogue for Peace took place as part of a conference of Civil society Forum of Eastern partnership countries. ‘There were representatives of different countries and it was a platform for their dialogue’, says Iryna Perchemli, a civil society activist and journalist, a representative of a Moldovan media Nokta. ‘It is a small part of the population, of course, strata of a civil society. But anyway this dialogue is needed, people will spread common values after it’.

In Kassel, the Open Dialogue for Peace was organized by members of the art center Hugenottenhaus. ‘It was important because the war and peace questions were the main topics at our exhibition “100 people 100 days”. Its impact was that we got a new way of talking about peace, of seeing more than one direction and opinion. We got positive feedback after the workshop, we were surprised and astonished how good it worked, and we talked a lot about the experience’, says an artist and curator, a co-organizer of the Open Dialogue for Peace in Kassel Lutz Freyer.

The Open Dialogues took place between the civil society activists, artists and mainly the passers-by, people who did not know each other. Minkin observed situations when at the beginning the participants had no particular expectations from a conversation, but gradually they were getting engaged in a talk by its topics.

‘The root of our methodology is the idea that ordinary people have an opportunity to share their opinion. To give advice, to shape their vision on how to build peace in the society. Without a methodology, communication usually lasts for a minute and the talk is about a rainbow and pigeons. The methodology helps to structure thoughts, and shape your own vision based on the real peacebuilding practices’, says Minkin.

People in Ukraine have a diverse understanding of the phrase ‘dialogues for peace’. Someone could hear it is about the dialogue with Russia. It’s absolutely not. Russia is the invader. It came with the war, and since its start thousands of people have died and keep dying, especially among the civilians. These people were murdered in their apartments and in the basements, where the missiles and airbombs hit, people who were shot dead and tortured to death. It’s clear the aggressor will be moving forward as long as it can.

A possibility of peace means to kick Russia away. And the democratic countries of Europe and the world are helping us. They are supporting Ukraine with weapons and with hosting millions of its citizens. They will help to rebuild Ukraine after the victory.

Despite the horrible times now we and Europe are as close as we have never been during the period of Ukraine’s independence. Ukraine’s future is with Europe, and that’s why we should communicate. This is important for Ukraine as well as for the EU countries.

‘It is essential to create together a common vision of how we want to live together, and imagine solutions to current and future problems. Within this context, it is important to think about how to bring ordinary people from different communities into a dialogue. The concept and method of the Open Dialogues for Peace is a very good instrument to enable such a dialogue. It facilitates talking about broad and sometimes hard to grasp topics. To me, such dialogues can serve as a starting point to start collectively thinking of how we wish to live together in a diverse society and how to work as a society towards a new togetherness’, says Stefanie Schüpbach.

The Facilitation kit “Open Dialogue for Peace” has been produced with the assistance of the European Union under its Eastern Partnership Civil Society Fellowship Programme. Its contents are the sole responsibility of the authors and do not necessarily reflect the views of the European Union.

The methodology was tested in Ukraine and Switzerland in 2022 as part of the cooperation between the Youth Organization “STAN” (Ukraine) and Polit-Forum Bern (Switzerland) with the support of the European Cultural Foundation.