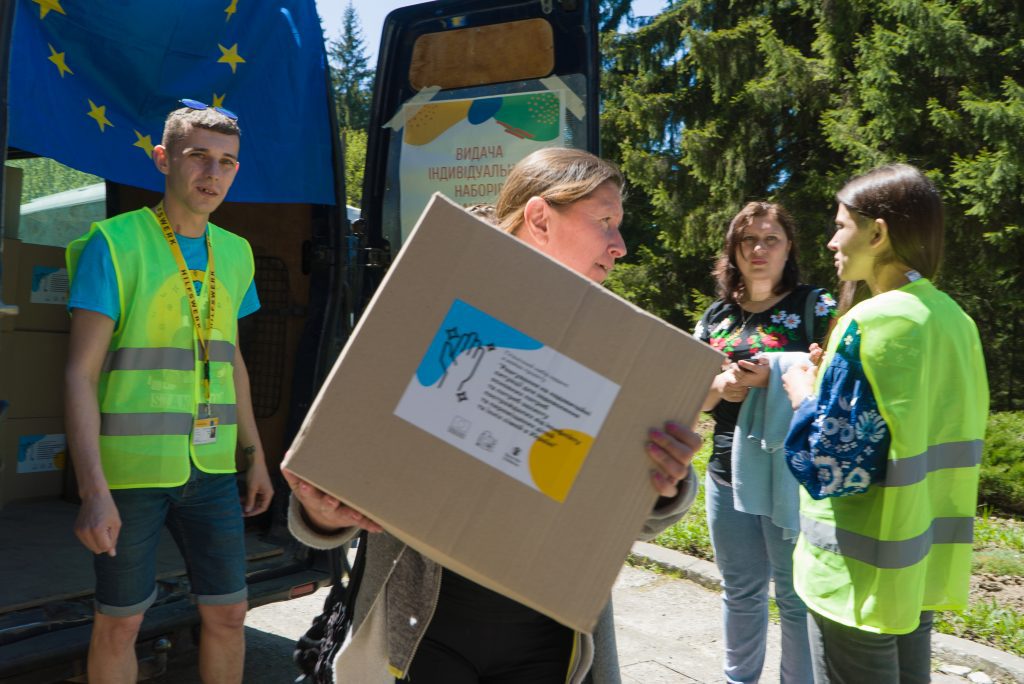 Due to the full-scale Russia’s invasion into Ukraine, millions were forced to leave their cities, towns and villages, losing houses and families. The war deprived many people of an opportunity to work, and not all had savings. That’s why financial support from international NGOs is so important. This article tells about how Youth NGO STAN is helping forcefully displaced people to get help from UN and Save The Children. 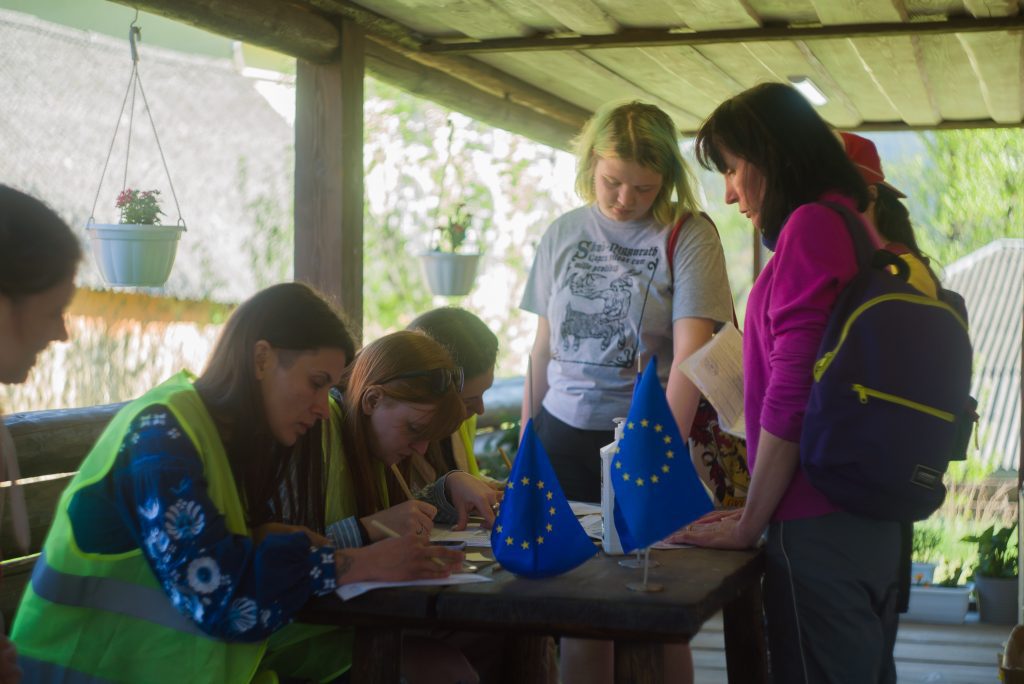 Changing needs and a need to change

Before the full-scale war, Marichka Stashkiv used to work in management positions in several restaurants in Ivano-Frankivsk and founded a coffee place. And after February 24th, she dived into work for the civic society. She started volunteering at the train station in Ivano-Frankivsk. Thanks to her previous experience, Stashkiv became one of the supervisors, in other words – responsible for the shift.

Volunteer initiative at the station was born among the STAN NGO team as a response to the flow of forcefully displaced people arriving at the station at night, during the curfew hours. Often physically and mentally exhausted, they could not leave the station till the morning due to the curfew. People needed something to eat and drink, and to have at least relative comfort for several hours.

As time went on, the flow of people arriving in the western regions of Ukraine decreased. So, volunteers steered their efforts to the areas where they were in more need. Around the same time, STAN with The International Organization for Migration started helping internally displaced people registering to receive financial help from UN. Marichka Stashkiv took on this responsibility and engaged several active volunteers from the train station. 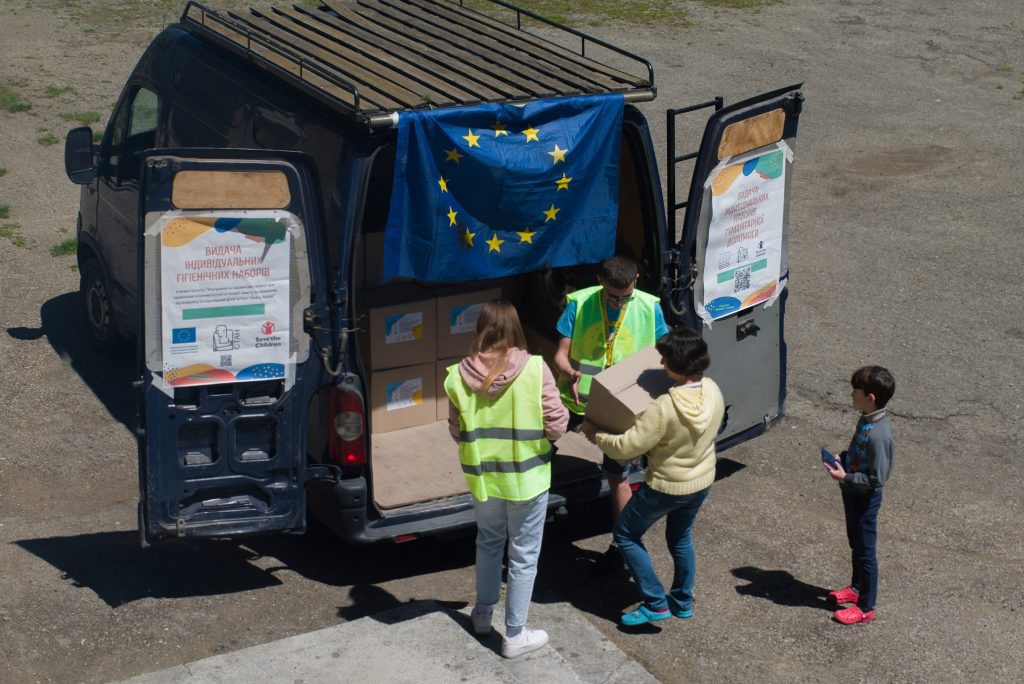 A registration point to get help from UN had already been operating in the city, but it was also attended by IDPs from other regions. For visitors, that meant longer queues and the need to commute. That’s why STAN decided to open registration points in smaller towns of the Ivano-Frankivsk region: in Kolomyya, Kalush, Dolyna and others.

A field team was formed. It arrived in a certain town, opened a registration point and at the same time held training sessions for the local activists. Later those local people went on with the registrations, and the STAN field team switched to another town.

This work was conducted in close cooperation with the local authorities. “We worked with local administrations, with village leaders. They found a space, provided us with information about the number of people in town, and how much time the registration could take. They also informed IDPs we were going to come because some people did not even know such financial help existed. We contacted local authorities through the IOM”, says Marichka Stashkiv.

Kolomyya became the first town where such a registration point was opened. And maybe the most complicated one. “During the first week, people working at the registration point in Kolomyia could not even leave the spot for a lunch break. They could have only 15 minutes break. They were expected to work until 5 PM, but there were so many people with small kids who came to Kolomyya from the towns and villages nearby. That’s why our field team stayed longer”, says Marichka Stashkiv.

The registration point was attended not only by people from Kolomyya. People were coming from the neighboring regional centers like Chernivtsi, Ternopil and even Rivne which is 300 km away. In a way, the same situation as previously in Ivano-Frankivsk repeated here. No matter where the registration point was opened, people were coming from the neighboring regions.

On the first sight, the need for such points seems strange. The registration is going on online, which means – at first glance – an easy process, enough to have a smartphone or PC. However, the number of people who were coming to register speaks well for the opposite.

“The point is, that on the internet, in the news they are colorfully writing about so many ways to get help: from UNO, from the Red Cross etc. But in fact, nobody gives detailed information. It is not clear where we should go, whom to address, and what the procedure is. When you talk to a person offline, eye to eye – everything becomes much clearer”, says Alina from Luhansk who came to register in Kolomyya from Rivne.

After opening a registration point in Kolomyya, STAN team started registering people in Zabolotiv, Rohatyn, Bohorodchany, Tlumach, Dolyna, Kalush. Working in those towns, the field team often splitted itself and several people went to the nearby villages.

The team registered 10825 families of internally displaced people in total, more than 20,000 people. 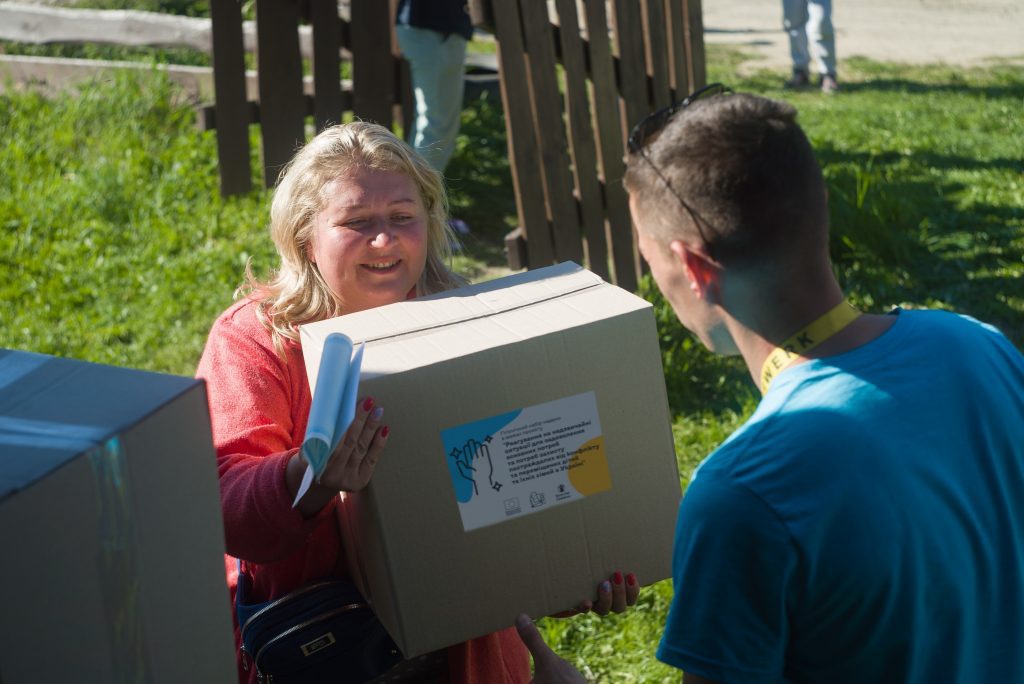 Since the beginning of the war, STAN has been working on delivering humanitarian aid to IDPs and supporting shelters. Among other things, in a partnership with the international NGO Save The Children, with support from the The Humanitarian Aid department of the European Commission (ECHO), STAN team packed together 400 hygiene kits for families with underage children. Washing powder, shower gel, shampoo, antiseptics, toothpaste and many other things, – everything taking into consideration children’s needs. The previous work with IDPs and the donor’s experience and standards helped to better understand these needs and choose the most needed set of products. The result was 16 kg packs with hygiene products that should be enough for two months.

Interestingly, the registration of the IDPs for financial help from UN helped to understand what is the best way to distribute those kits. While talking to people during the registering process, the team members noticed some communities and regions receive humanitarian aid more rarely. Partially because these settlements do not appear in the media or local authorities do not publish information about the needs, do not contact with humanitarian organizations and foundations. But the needs do exist, only fewer donors know about them. Also, STAN took into account that while the organization is already providing the needs of the shelters it supports, there are many people who don’t live in shelters, and they also need help.

Thus, STAN’s team decided to distribute hygiene kits in those towns and villages from where they have received many signals about the lack of help. In a certain measure, this process was combined with the registration of IDPs for payments from UNO. Some of those who came to register, got the kits right away.

Again, communication with the local authorities was very useful. As STAN operational manager Maria Keliy says, “That was a quality cooperation. Local administration made calls to the families, so that they came at a specific time and received the help. This is how we worked in Rohatyn, Dolyna, Vorokhta and Verkhovyna”. 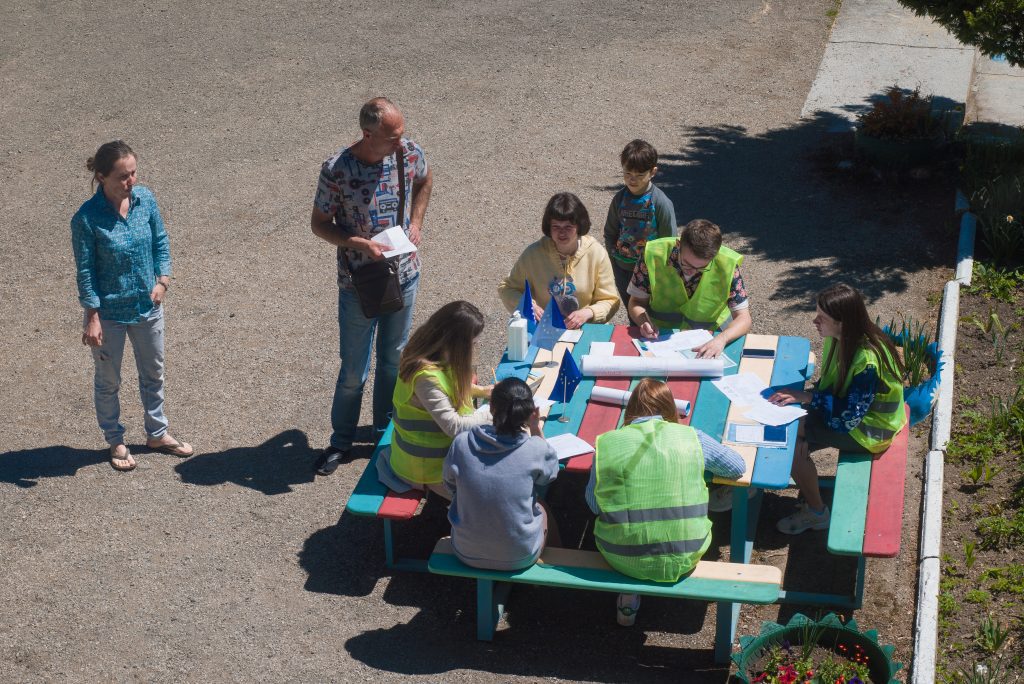 On the other side of the Carpathian mountains

To distribute the kits in the Zakarpattia region where STAN also supports shelters, the organization addressed Adrien David, shelter coordinator in Bakosh village. Adrien distributed the kits in the shelter and the village, then she contacted two other shelters nearby and handed out the kits to the families with children. With the help of the local administration who provided Adrien with addresses of IDPs who live in the private houses in villages, not in the shelters, she delivered the kits to the villages of the community.

“I went in my private car. I called people, and we agreed on time and location, then they came, filled out the form, and got the kits. At first, some people did not understand what it was as the kits were heavy. The box was huge, so people were pleasantly surprised. Many of them told me they haven’t got any help for three months”, says Adrien. Kseniya, a forcefully displaced woman who lives with her family in Bakosh, says: “This was very needed and really on time, because we have difficulties with job and money nowadays. Washing powder and all the rest – this is just what we need and the quality was good. Thank you”.

Marichka Stashkiv mentions situations when people haven’t gotten any humanitarian help till now. Forcefully displaced people live in big cities and small villages, and not all of them appear in media, not all of them are visible in public space, many of the villages are simply very hard to reach to deliver humanitarian aid. But the road conditions or invisibility of a certain town in the media are not excuses for not delivering help to people who need it. 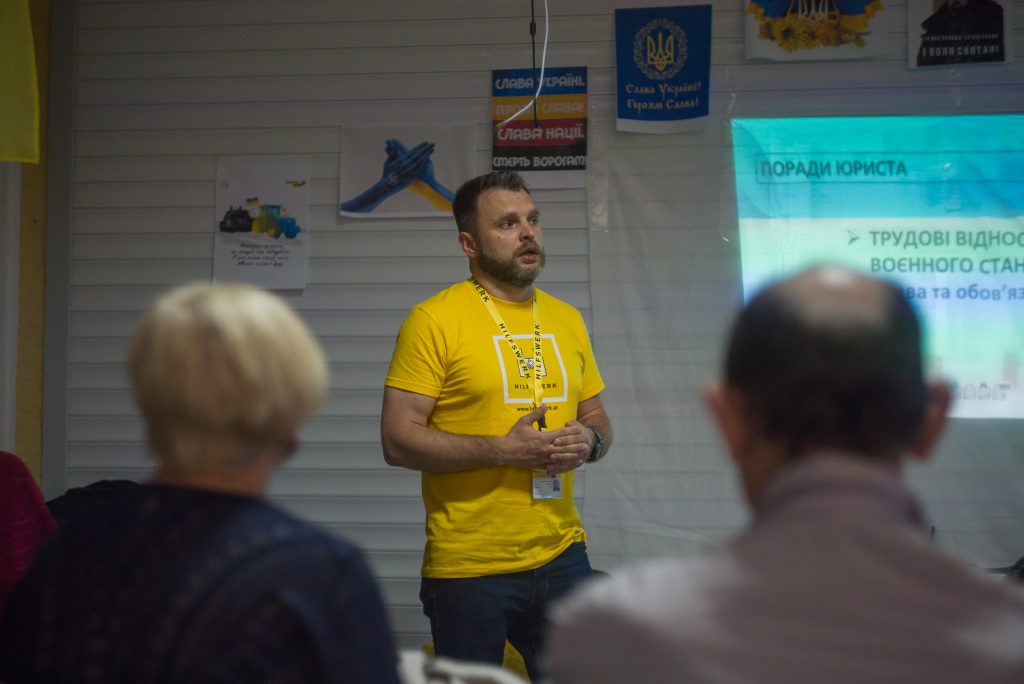 The IM Swedish Development Partner and Prague Civil Society Centre support the organization’s team and the activities of the resource centre, where the coordinating headquarters of the Carpathian region’s shelters are located. House of Europe provides the necessary equipment for the work in the region. The Hilfswerk International provides humanitarian assistance for shelters, food and comprehensive support for people, provides funds for baby food for the youngest IDPs.

Save the Children Foundation with the support of the European Commission’s Directorate-General for Civil Protection and Humanitarian Aid (ECHO) helps to provide comprehensive work with children and young people affected by hostilities.