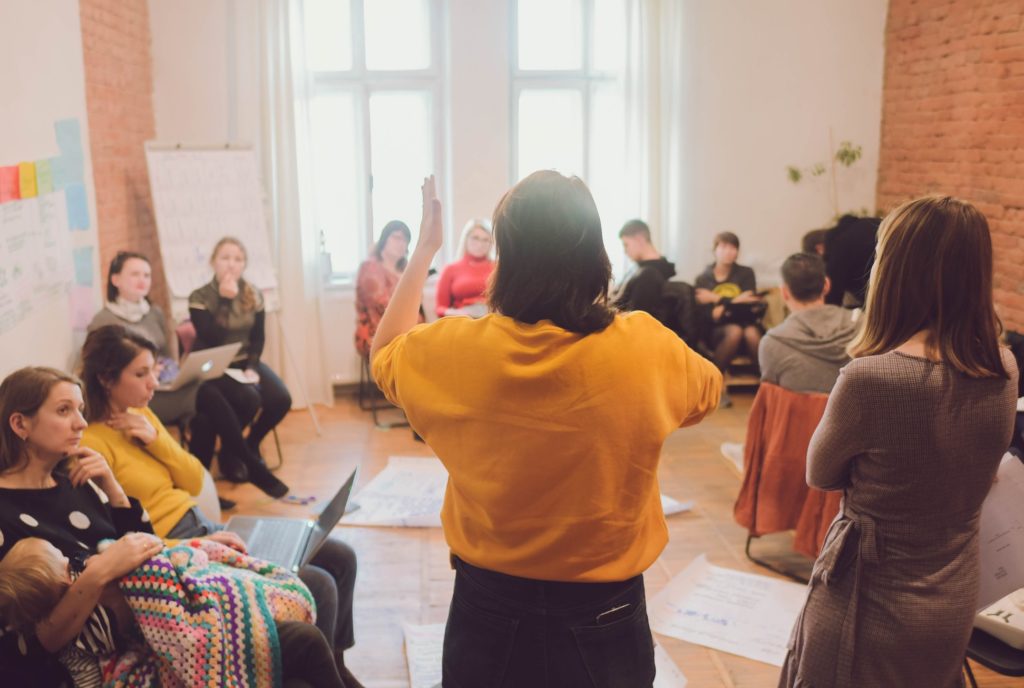 “Until the displaced are given the right to vote for local government, there will be no equality.” — excerpt by Olesya Arkhipova. Part 2.

Olesya Arkhipova moved from Makiivka, Donetsk region to Ivano-Frankivsk in 2014 due to the Russian aggression in the Donbas. Over the next few years, she presented as one of the active IDPs, followed community image activism in Ivano-Frankivsk, undergone profound transformations to address the issue of non-discrimination, and sought to reduce xenophobia at the same time. Today, Olesya is a trainer and facilitator on topics such as human rights, gender equality, critical thinking, and civic education. She says that she is accustomed to a new home – integrated – but does not remove the “relocation jacket”. However, she wears it every time to address the stereotypes and prejudices that exist in the community regarding displaced persons.

On the stereotypes, prejudices, cultural and legal inequalities faced by the IDPs, we spoke with Olesya during the Kherson and Melitopol study visit for the “Diversity Ambassadors in the Pre-Carpathians” project. The “Diversity Ambassadors” project in the Pre-Carpathians has been implemented by the STAN Youth Organization with the support of the United States Agency for International Development (USAID).

Tell us a little bit about DOM 48.24. What is the history of this organization?

I am not currently an active member of the organization. I remain a founder, but I do not participate in operating activities. I can tell you where it all started, but it probably only needs to start a little from the beginning.

For the first six months of my life in Frankivsk, I had no friends at all here. I knew then how difficult it was for an adult to get to know each other. You have a job and everything. Okay, you still take the bus, you go to a cafe, but you don’t sit next to any company; you don’t say, “oh, hi dude! I see you having fun here. Can I hang out with you?” Maybe today I would say so, but at that time, definitely not. Other IDPs also experienced similar problems. So, we were looking for each other on Facebook. We had a group where we talked, either just talking or we met from time to time. And then the moment came when we decided that we needed to do something to get the locals to see us as equals. I wrote a post about this in the group and since then, we started thinking about setting up an NGO. We sis not know exactly what this organization had, but it was important for us to do something cool so that everyone in Frankivsk would see that the IDPs were cool, that they were not a burden, but rather a reinforcement for the city.

This was how DOM 48.24 was created. Sergey Nikonov, Natalia Vyshnevetska and I were elected to the Board of the Organization and we started working. We did everything we could: Roboclub, theater festival, activism training, eco-projects. What was being done wasn’t important, but who was doing it was. With these events, projects, initiatives, we had gradually built a positive image of the displaced person. You asked me before, “You did so much, didn’t anything change?” The fact is that good news does not live as long as the bad. One case happened where one of the IDPs, who was also involved in activism and volunteering, stole a phone. The news of the theft instantly broke down in the media with headlines in the style of “Migrant-activist Stole the Phone.” The next morning, we woke up as if in another world. It felt like we were building a house of cards all this time and until the wind blew, that house fell over.

And we had many cases such as this one. So, destroying stereotypes is a very difficult job. We constantly prove that one case is not all, but when everyone knows about this one case, as it was talked about through all social networks, the argument is to clench your teeth and start doing it all over again.

In one of the trainings, I recall you saying that one of the negative factors affecting the integration of IDPs today is that they have no right to elect local government in the communities in which they live. Can you talk about this problem in more detail?

It’s just about the systemic level of the problem. Until the displaced are given the right to vote for local government, there will be no equality. Today, the situation is that IDPs pay taxes, large enough, but have no opportunity to influence the life of their city. The point is not even whether these people will go to the polls. The right to elect local authorities is necessary for IDPs in the first place in order for local politicians to be guided by their needs too. So, how does it work? Decision makers only notice those who can influence them. And how can we influence the programs with which politicians go to the polls if we don’t even have a say? Will IDPs be treated as equals in society if there is no legal equality between us and the locals? In my view, giving IDPs the right to elect local government representatives will ensure genuine equality, not cultural visibility. There is a pyramid of power relations consisting of individual, cultural and systemic levels. At the individual level, many displaced persons are now integrated. They do not feel biased. Many do not even consider themselves displaced.

At the cultural level, we see some changes also. Stereotypes do not disappear, but they are transformed. The poverty agenda is no longer present, but the message, “They Are Strangers” remains as they have a different mentality, misunderstanding with the language and they are not at all Ukrainians… We are trying to work with this.

However, almost nothing has been done at the systemic level. There are changes in the procedure for buying apartments, but application is almost impossible. There are other positive changes, but here they do not affect the situation dramatically. And who initiates change? Are the IDPs themselves able to occupy certain posts, or the people who have the privilege of not being an IDP?

For the most part, these are people who have the privilege of not being displaced, as well as a number of human rights initiatives addressing this issue. Among them are the East-SOS, the Counselors Program, and the Theater for Dialogue.

In general, very few displaced persons work in the administrations because, firstly, not many of them went into politics, and secondly, they did not have much of the popular support. There are isolated cases where displaced persons have become members of local councils, but I do not know of such examples in the Ivano-Frankivsk region. I know of the ones in Lutsk and Turiysk in the Volyn region. I know that there are a lot of active IDPs and displaced persons going to this local election.

What steps can we take to improve the situation of displaced persons in government, at least locally?

This is an interesting question because it immediately sends us to another. Who should provide representation? I think that the process will go faster if it should start from the bottom but gaining some support from the top. On the one hand, we can try to go to the local elections as candidates and, if we are elected, to represent interests including displaced persons. On the other hand, it is important to carry out an information campaign that displaced persons should have the rights to elect local authorities. And this is a difficult question to come first. Do we first give voters the right to vote, let the IDPs choose who will protect their interests, or do we campaign among the locals, arguing that the IDPs’ interests must be represented because if some social group does not “remain in the shadows,” this slows down the development of the entire community.

Changes can be initiated by both government officials and grassroots activists speaking on behalf of the community. But, to accelerate them, it is necessary to act at the individual, cultural, and systemic level.

At the individual level, people who see and feel inequality need to be convinced that they can and should go into power to represent the interests of all displaced persons in Frankivsk. At the cultural level, it must be understood that such representation is needed. And at the systemic level, certain legal mechanisms must be put in place through which displaced persons can meet their needs.

Of course, not everyone should advocate for the interests of displaced persons, but it must be understood that a “non-legalized” social group is still present in society. But until the group has legal status, stating that since we cannot see the group and therefore cannot take into account its needs, we cannot control it. As soon as we “legalize” it, 1) we can see all the processes that take place in it; 2) we can influence them; and perhaps most importantly, 3) helping this group to realize its rights and needs allows us to protect our own. The needs of IDPs and the communities in which they currently live are often overlapped. And, when we see that displaced persons have some difficulties in meeting their needs, we do not ignore, we do not disassociate ourselves, and we solve these problems because the whole community benefits. For example, it was only possible to get medical help in cities of residential registration. It was really inconvenient because many Ukrainians do not live where they are registered. If someone is studying or if someone is working in another city, do they declare their needs? No. It looked like this: if you needed medical help, you had to leave work to go to another city. And people did. Asked, drove, or simply killed for their health. Only when there was a problem with displaced persons in Frankivsk, Kyiv, Lviv, there were people who could not go to the city where they were registered for medical care because their cities were occupied; this norm was abolished. This solved the problem not only of displaced persons, but also of a large number of Ukrainians from the occupied territories. The IDPs became a kind of litmus test; their example showed what principle problems exist in society. But there is nothing unusual about that. It works not only with IDPs, but with any “invisible” social group. If we do not see it, if we do not react to its problems, then in this we give passive consent to the oppression of our rights. As soon as we begin to notice this group, communicate about its needs, take additional actions, the whole community immediately begins to receive better services from the state. Why does it work this way? It’s because only those groups for which this need it critically urgent are ready to defend it. In fact, they talk about our needs for us. Only when we hear everything and take into account the needs of all, can we fully exercise our rights.

The interview was created within the framework of the Diversity Ambassadors in Carpathian region project implemented by the STAN Youth Organization with the support of the United States Agency for International Development (USAID). Content is the sole responsibility of the STAN Youth Organization and does not necessarily reflect the views of USAID or the United States Government.