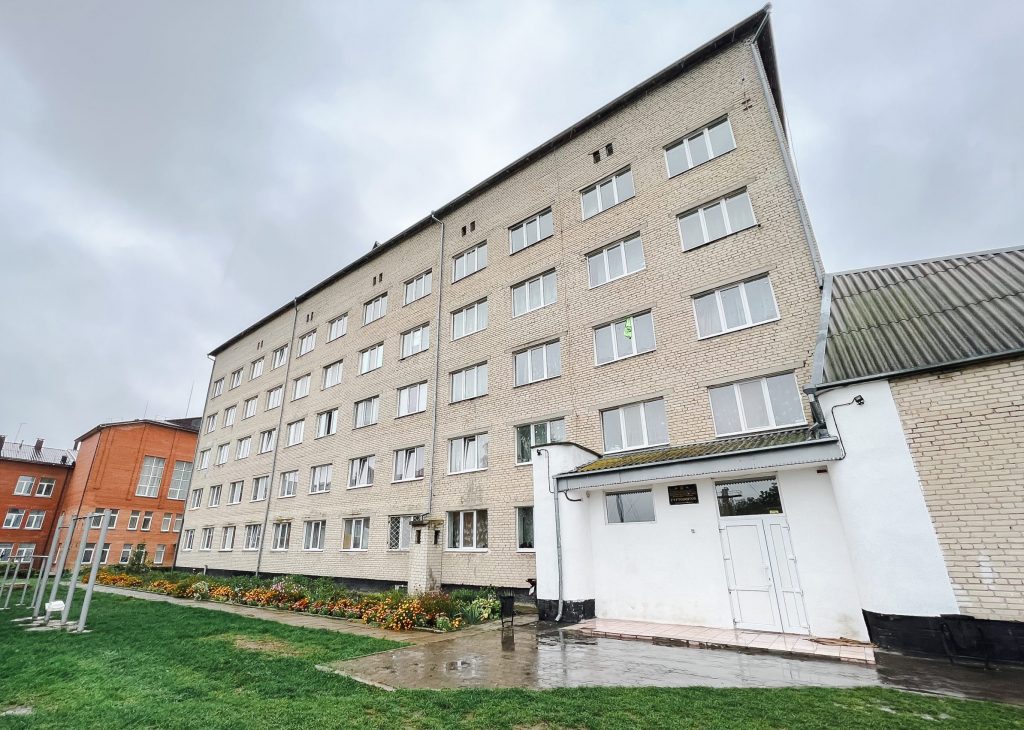 Volodymyr. A Shelter in Volyn

Volodymyr is a Ukrainian border town in the Volyn region, 11 kilometers from the border with Poland. Since February 24th, it has been serving as a transit point for many Ukrainians who were fleeing the war and moving to the West. However, lots of people stayed in the town. Many of them live in a shelter located in a dormitory of a Vocational training center. Things have changed since spring. Those who could come back to the liberated areas, have already left Volodymyr. Those, who have no place to come back yet, still live in the shelter. These people need support, yet they also provide it. 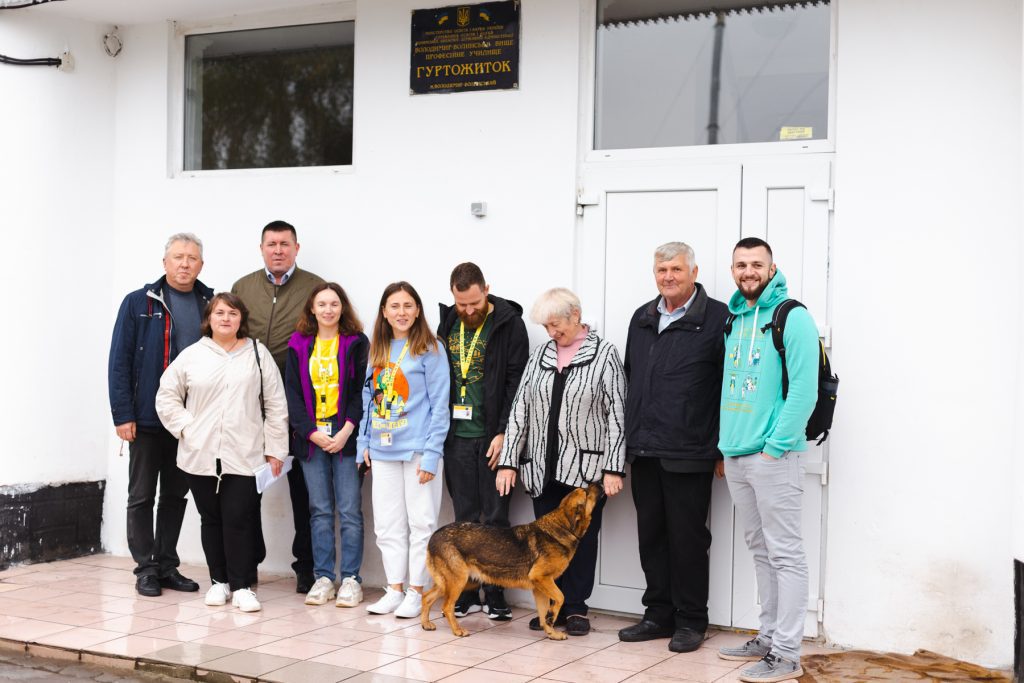 No place to come back yet

Yurii Mozol, the head of the Vocational training center says, ‘When the full-scale invasion started, our regional administration reserved all the educational institutions that had dormitories and could host people for the accommodation of the internally displaced persons. My college was reserved for long-term accommodation. Those people who came for a couple of days, were sent to another dormitory. And those who had no place to come back, like people from Mariupol or Severodonetsk, were sent to mine’. 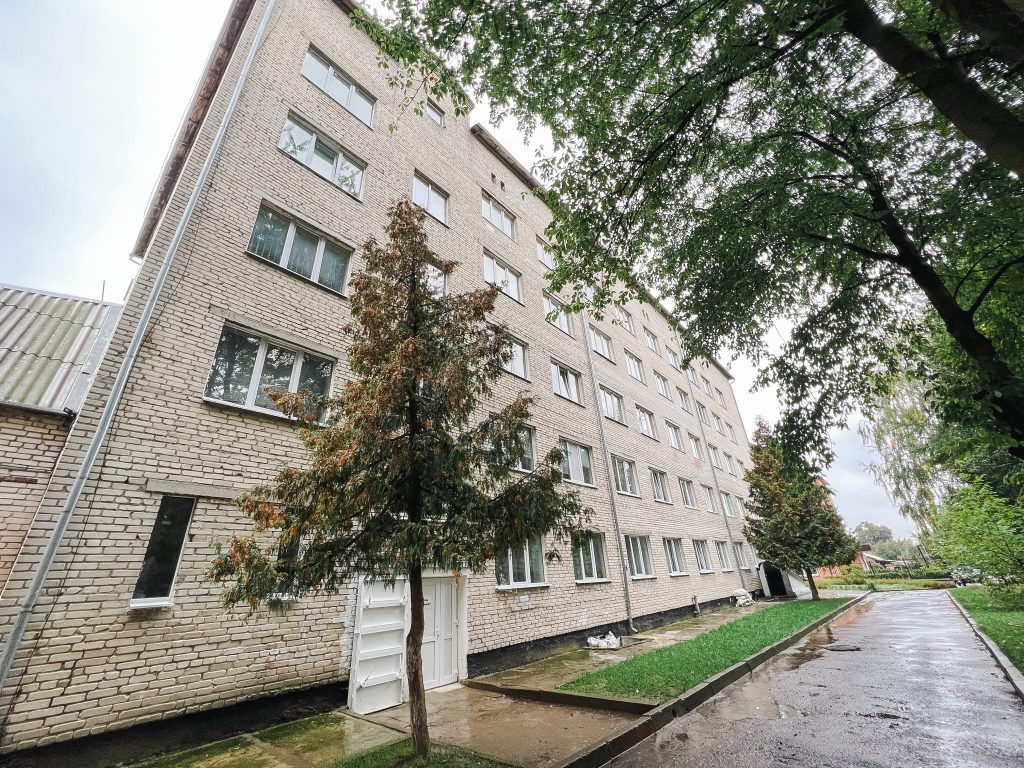 The first internally displaced people arrived at the dormitory in early March. They came from the hottest places, some of them without even a bag, without passports. They wore only what they had when they left their houses. There were women in men’s shoes. They found here a shelter in the most precise sense of the word: a roof over their heads, comfort and support. 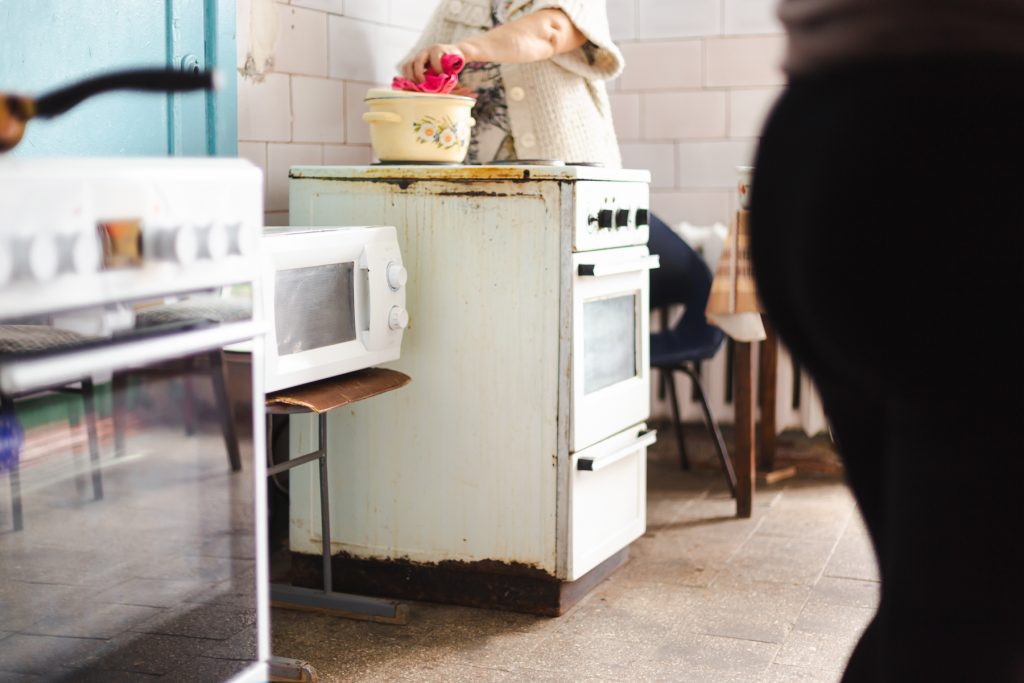 The shelter’s conditions aren’t luxury. The sanitary arrangements were about 40 or 50 years old: plumbing equipment, pipes, sewerage – everything was aged. And the student dormitory itself is not the best accommodation for families with children. There is a ‘block’ system in the dormitory: one block has two rooms, each for two or three beds. There is a toilet and a sink in the block.

The dormitory had to be adapted to the new conditions. New kitchens were equipped on every floor, additional sinks, stoves and two large fridges were put in every kitchen. The dormitory management also equipped laundry facilities and made two big shower rooms, separate for women and men.

It was difficult in the beginning to organize a living space and provide food supply. ‘You need some food for the start, so you go and buy everything in large quantities: sugar, salt, grains, cereals, noodles, tinned meat etc. You buy and give it to people. Buy with your money’, says Mozol. Volunteers helped this shelter as they helped others shelters in Ukraine. People from the town brought food, mattresses, and other stuff.

Later, charity foundations and organizations joined in. ‘One foundation bought 100 beds. Others brought toilet bowls, washing machines, fridges. With time, it became easier. When you mount a new washing machine, you know it’s going to work for two or three years, you won’t need to fix it soon as it happens with the used machines’, says Mozol.

STAN Youth NGO is among those who are systematically taking care of this shelter. In cooperation with the local NGO Space VV it tries to make its support maximally in accordance with the IDPs’ needs. 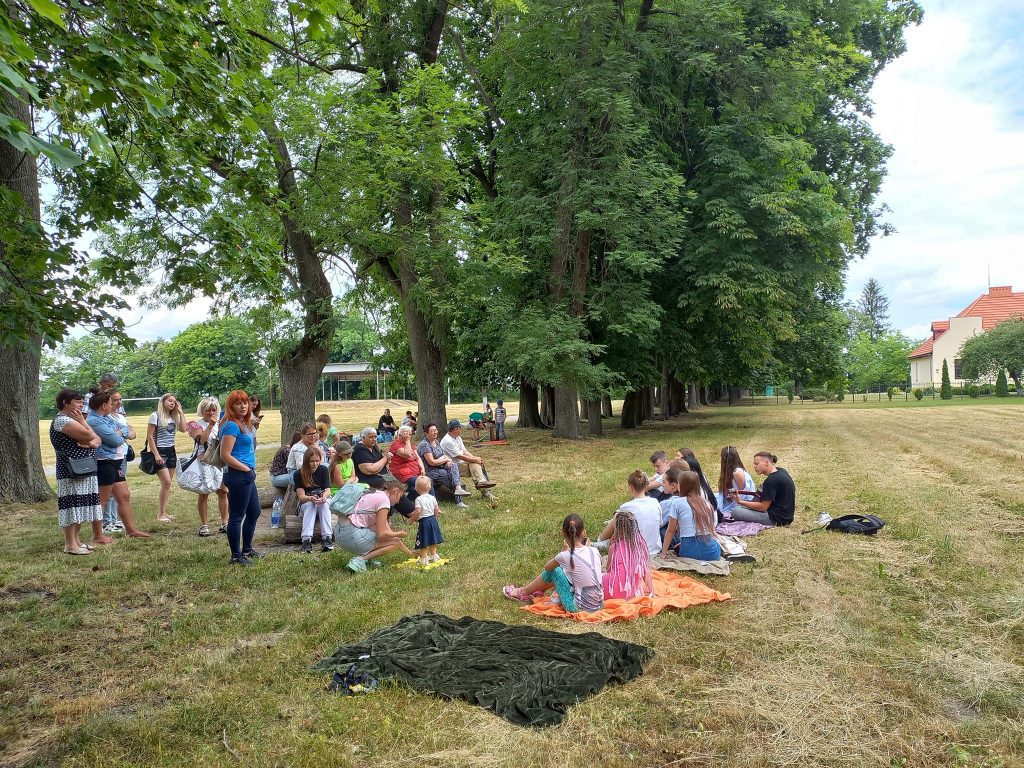 In 2021, STAN organized a social entrepreneurship training program for Volodymyr teenagers. 20 students of the Anatolyi Korenevskyi lyceum # 5 became alumni of the program. They founded a Space VV NGO to implement their projects. Their curator Oleksandr Tarasiuk, history and economics teacher, became a founder of the NGO. Before the full-scale invasion, Space VV used to work in the field of youth cultural development. ‘We wanted to compensate for the absence of the youth center in the town by our organization’s activities’, says Artur Salukha, 11th grade student.

After February 24th, the members of Space VV together with STAN started supporting Ukrainian Armed Forces and IDPs. They organized community events to engage people from the shelter in the local life of Volodymyr.

‘We did what we could. We weaved camouflage netting for our 14th brigade. We collected food and passed it to the soldiers. Here, at school, we took care of the IDPs and cooked hot meals for them. We also worked a lot with the IDPs in the shelter. We visited the shelter, met with its residents, and told them about our organization and our town. We worked, played and sang together’, says Tetiana Tarasiuk, an English teacher. 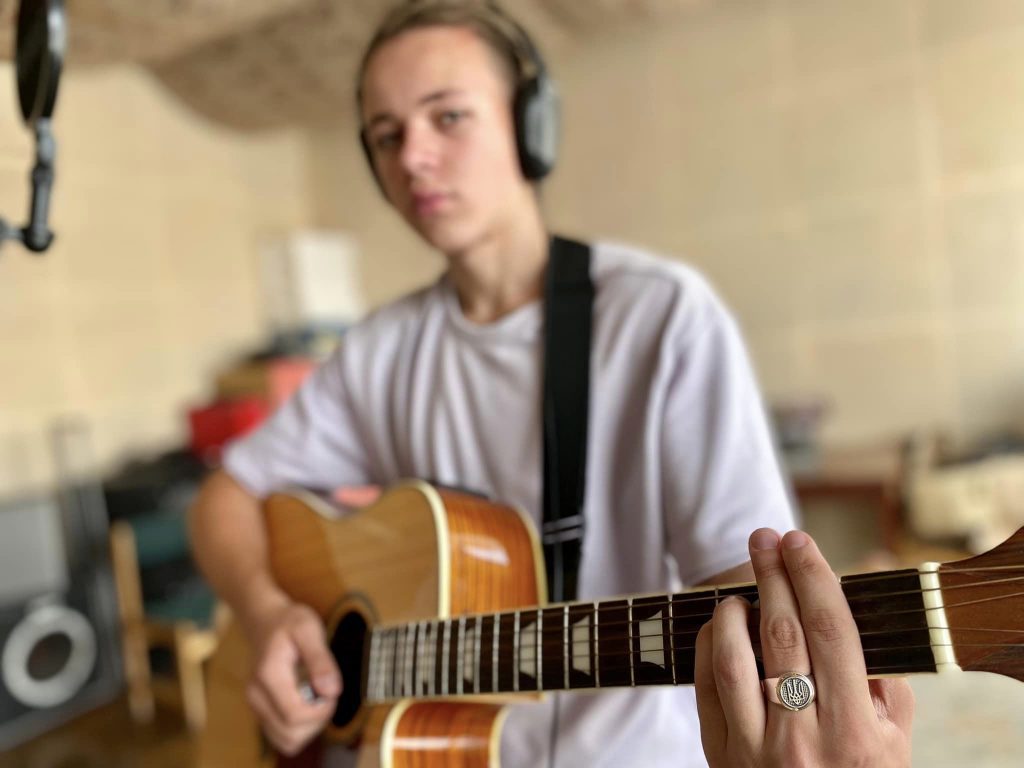 ‘Dormitory is a dormitory’, says Oleksandr Smaha who lives in the shelter with his family. ‘Everything is common. You come back from work and want to take a shower – and the hot water is over. It’s cold. Or you want to wash clothes – and all the washing machines are occupied, there is a line’. 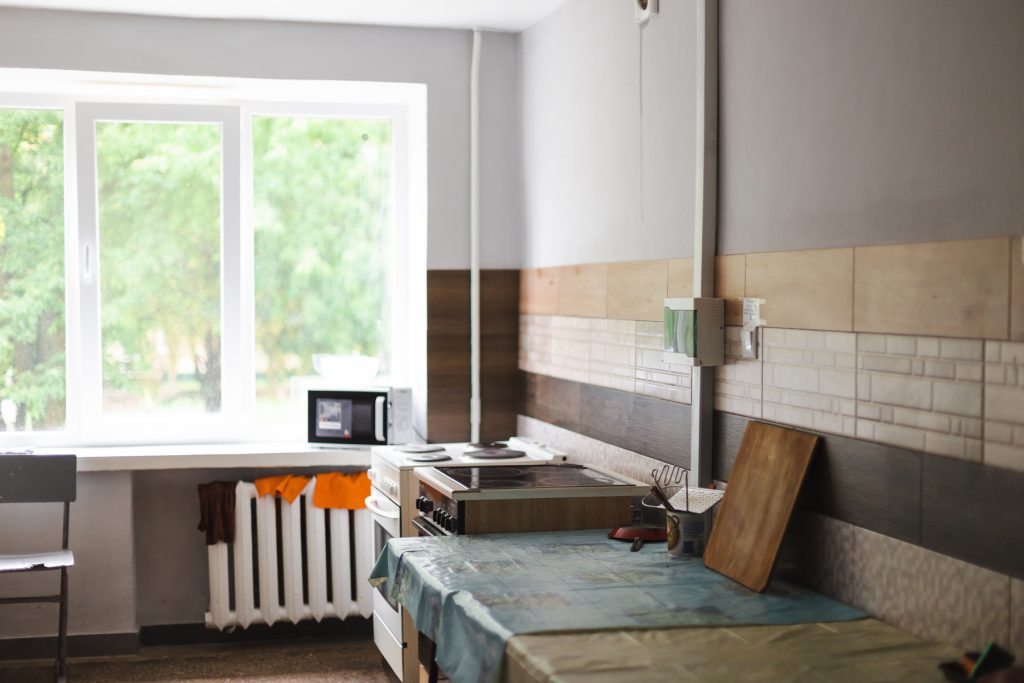 For many, the shelter has become a refuge. However, it is a forced, temporary step because many IDPs, unfortunately, cannot afford to rent a separate apartment yet. ‘Rent is expensive’, continues Smaha, ‘The owners accept payment in USD. If I start renting with one price, after a couple of days it will get higher. It’s expensive, very expensive’.

Oleksandr is employed now at the poultry farm. His salary is enough to keep up but not to rent a flat. Smaha says, it’s his daughter’s teacher’s husband told him about this job, i.e. Oleksandr Tarasiuk. Tetiana and Oleksandr try to help IDPs with employment. Being locals, they know people, know where to go and whom to ask. Also, Yurii Mozol helps with this issue. He advised some of the IDPs to look for a job at local farms or in other sectors.

‘Some people work in cafes as waiters or cooks’, says Mozol. ‘We had several welding operators, I invited one of them to work here, in the college. Some people came with their cars and now work as taxi drivers. Some of them do remote work online, all the time on the internet. If a person cannot work, like the elderly or women with kids, we have to do everything to provide them with what they need. There is no other way. But if a person can work, she or he has to’. 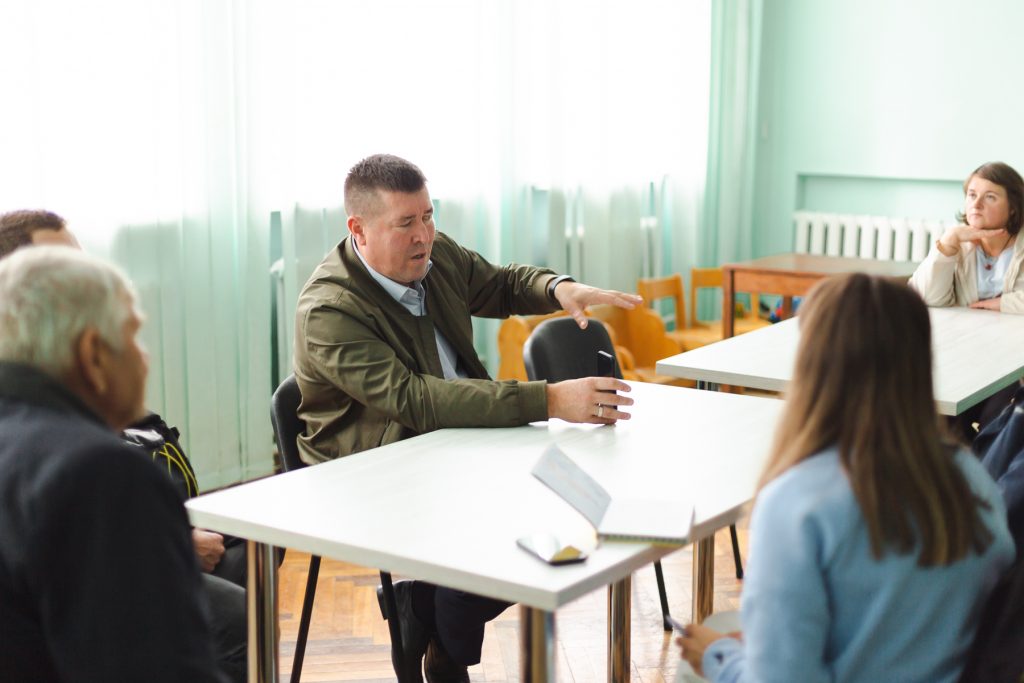 The aim of STAN’s work is that the forcefully displaced people would stand on their feet, live without shelter. But currently the need is to fulfill their basic needs and make life in the shelter as comfortable as possible. 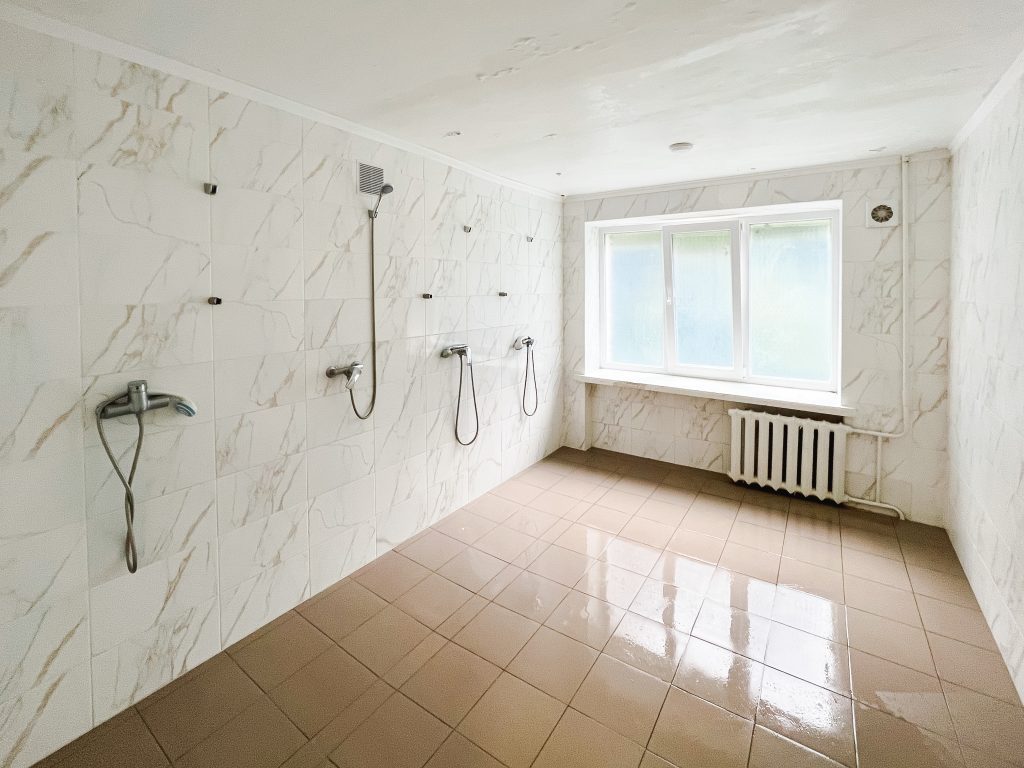 With the support from the American people, through the project “Strengthening public trust” (UCBI III) STAN was able to create additional beds in the dormitory and deliver humanitarian aid and food. With the support from the Austrian partners HWI, new tables and chairs were bought for the event hall so that it would be possible to organize common events, film screenings. Also, construction materials and tools for renovation works at two floors where IDPs live, were bought. ‘Even being in such a situation, if a person enters a bathroom with nice new tiles – even this simple thing could put a person in a better mood. And he or she will want more, will start looking for a job, for the possibilities to change life and will start taking the real steps for this’, says Tetiana Tarasiuk. 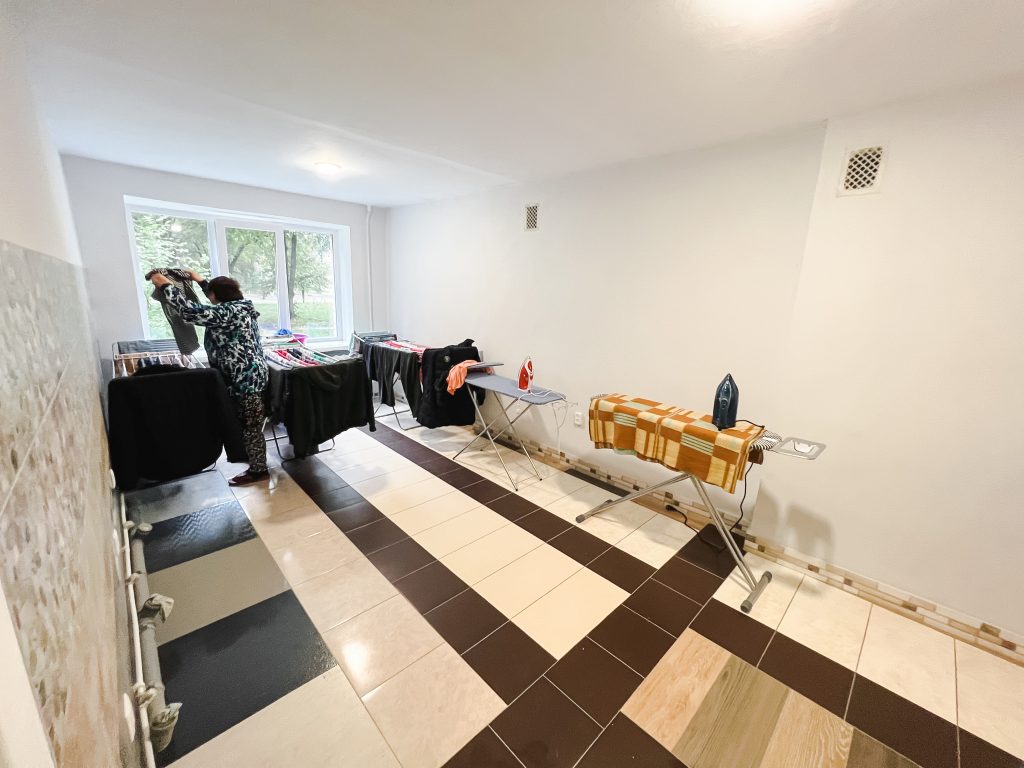 The 3rd Newton’s Law of Motion

It’s written this way: F1 = F2. It means, to every action there is always an equal reaction. This works not only in Newton’s mechanics. Volunteer work and support are important for people who are helped, but also they are important for those who help. There is never a single action, there is always an interaction. To explain this, let’s tell the story of Vesta Rubashko from Melitopol, the 8th grade student of the lyceum # 5 in Volodymyr.

Right after Russia’s invasion started, Vesta and her family with pets left Melitopol. On February 27th, they were already in Volodymyr, because their relatives live there. Vesta’s family lives not in the shelter but in relatives’ friends’ house. Since spring, Vesta has been going to the lyceum to weave camouflage netting with her parents, grandparents or her brother. She met Oleksandr Tarasiuk there, and he offered Vesta to take part in an entrepreneurship training organized by Space VV. ‘This is how I joined Space VV, thanks to the nets’, says Vesta. 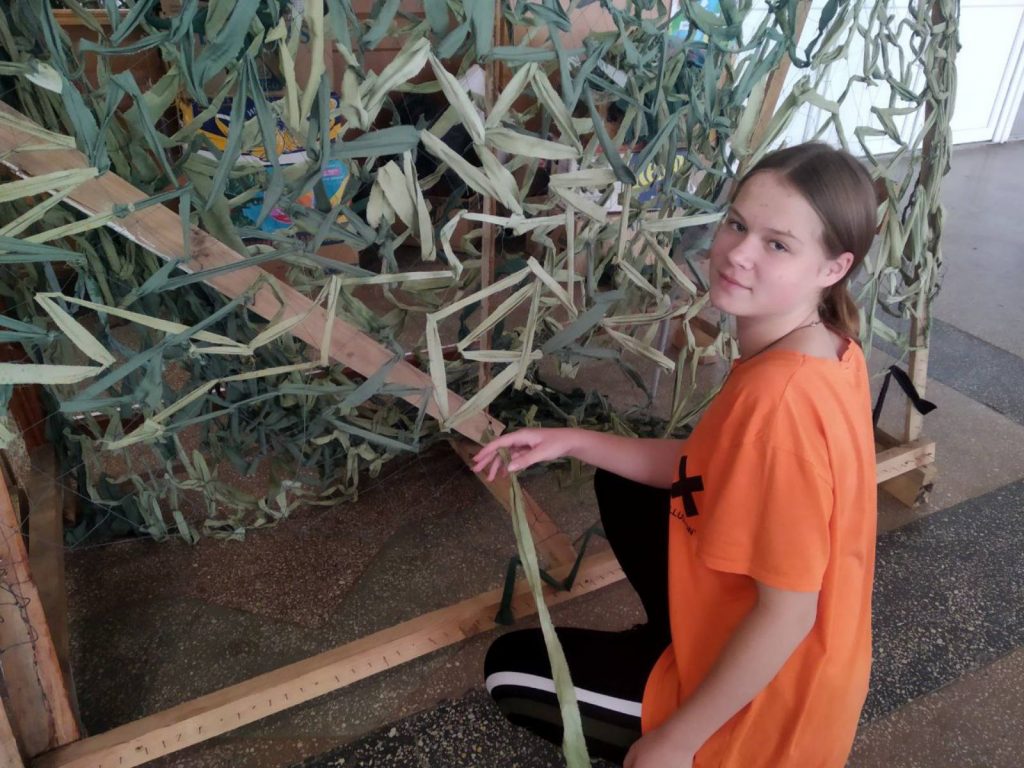 She has recently received support from STAN NGO in cooperation with IM Swedish Development Partner for a project ‘Entrepreneurship in action’. Now with Viktoriya Bortnyk, also a student of the lyceum, they organize workshops in financial literacy and the basics of running a business for other teenagers. Apart from that, Vesta is helping Space VV to organize events for the shelter’s residents. ‘We visited a pedagogy college, organized competitions and games for the IDPs – everything to keep them away from despair. We often visit different places, communicate with people’, says Vesta.