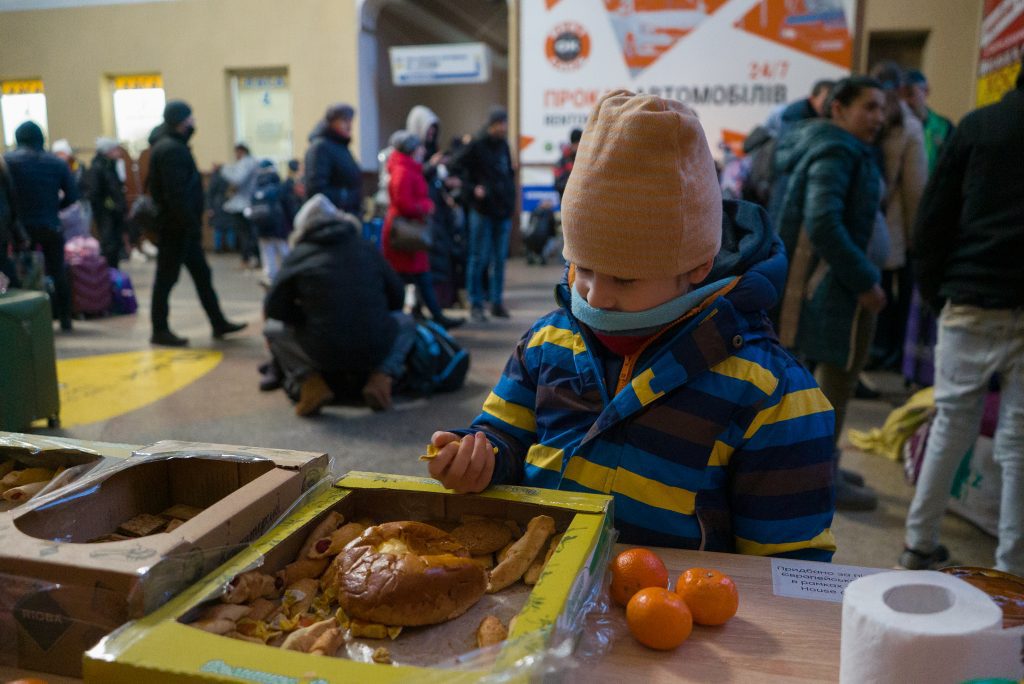 Volunteers’ help at the railway station in the west of Ukraine

The Russian invasion of Ukraine and the full-scale war it started on February 24th, deprived millions of Ukrainians, around one-fourth of the nation, of their homes. Three million people have gone abroad, around 11 – 12 million became internally displaced. The data is according to March 21st, however, the numbers are growing, and the exact amount is unknown. What’s important – there is an enormous number of displaced people in Ukraine, a number the country has never seen.

Warfare in the eastern, northern, and southern regions forces people to go to the west of Ukraine. They prefer to stay in the safer regions not far from the EU border, often to be able to take women and children away from the country.

Some people could leave earlier, others haltingly left houses almost barefoot, with few possessions they could grab in a hurry. Saving their lives was above all.

Arriving to Ivano-Frankivsk from the east of Ukraine

From the very beginning of the Russian invasion, national railway company Ukrzaliznytsia provided evacuation trains free of charge. These are not the trains you buy tickets for, and you have no reserved seat. As many people as could fit in, board the carriages of different types, less and more comfortable, and even the simplest carriages once used only for suburban routes. On the most crowded days, passengers occupied every space, sat and slept on the floor.

The road often takes more than 24 hours, and some people have no water or food. And the road is not safe. At night on March 14th, Russians shelled a train heading from Lviv to the town of Lyman in the north of the Donetsk region, one of the few railway stations functioning in the region. One stewardess was killed, another wounded.

Imagine you have packed your whole life into a small suitcase. Some things you have managed to put inside, others forgot. But most of the things you just have left, as you have left your house (very mush likely destroyed), furniture, books, winter and summer clothes, presents given to you and those you have prepared to give your friends – everything that is dear to you and what you were going to throw away one day and never dared to.

You have left your belongings as you left your house, your street, your corner shop, your neighbors. Or perhaps some of your neighbors got on a train next to you, prayed all the way long next to you – prayed to get safely to your destination and come back home one day. Yes, you will come back one day, you definitely will, you know this. And finally, the train arrives at the station. You get off at a platform in Ivano-Frankivsk. What’s next?

If you got less luck, you arrive in the middle of the night. The curfew starts at 10 PM and lasts till 7 AM. It’s prohibited to go outside, and all the shops are closed, so there is nowhere to buy water or food. It’s early spring, and chilly in the station hall. There are two waiting rooms, but both are already full, and soon another train will arrive with more people. Many would have to wait sitting on their bags on the floor

Volunteers’ help and assistance at the station

Maria Keliy started getting calls from her friends who were leaving Kharkiv, Kyiv, and other places in the east of Ukraine on February 24th. She works as an operational manager at STAN NGO based in Ivano-Frankivsk. Together with her colleagues from STAN, they started to think about how they could respond to these requests.

“We asked people who arrived in Ivano-Frankivsk at night, how we could help. They told us they get off the train and had to wait at the station till 7 AM, and the only person who was helping them was a local man, uncle Vasyl. On a bike, he was bringing tea in a thermos, sandwiches, and explained where people could find information about the accommodation”.

Vasyl explained to Maria the situation at the station and how they could join. She continues:

“That night we brought a thermos, a cattle, and sweets from STAN’s office. The Youth Council of Ivano-Frankivsk helped to draw volunteers in, and they set up the first night. They offered incomers food, tea, and coffee, tried to help with accommodation or to find buses abroad. What is the most important, volunteers say, is not a meal. People need to see they are not left alone”.

“There were people who told us they had not eaten for the three days”, tells Maria. They asked for any kind of food, and the queue stretched for many meters. However, there were no quarrels, nobody tried to get more food than needed. We had many personal conversations. People were keeping cool, but when being asked where they come from, they fall apart, going through the painful experience again. At this moment, we hold a person’s hand, saying we are going to help you. Such support is also important”.

In the next few days, more thermos bottles and electric kettles were bought, as well as extension cables so that people could charge mobiles and call their families. Day shifts were introduced, volunteer networks extended as well as the network of constant charity givers. Local people started bringing sandwiches, cookies, and baby food to the station. A bakery from Kalush, a nearby town, provided bread. “Bucha-Rest” restaurant brings hot soups everyday in 60 liters pots. People from the neighboring villages bring homemade food.

At first, volunteers put all the food on the tables mounted in the station hall, but in a couple of weeks a station cafe “Syta Lozhka” provided their space. Comfortable tables and chairs have been brought, together with equipment to warm up food and prepare hot drinks.

Volunteers also cook food for the train porters, who had to work for 5 – 7 days non-stop.

Volunteers’ headquarter communicates with the station duty officers, who warn them about arrivals and how many portions they should prepare for the train porters.

Four shifts in 24 hours, including a night shift. Each of them has its supervisor, responsible for appliances, sanitation, and safety. When an air alarm is on, all the people are guided to a bomb shelter. Supervisors are those who have some experience in catering and food service, and human resource management.

“I’ve been elected as a supervisor”, says Yaroslav, who has been volunteering at the railway station from the early days. “You see, when sandwiches are over, you make sandwiches, when people ask for tea – you go and make tea. At the same time, I’m taking care of hygiene, follow train arrivals to ensure the maximum amount of meals for people”.

Yaroslav’s occupation is personnel training. “I’ve got experience in staff management. As a manager, I’ve had to apply certain methods to make personnel do some things. Yet here I faced a phenomenon of high motivation and self-organization. Volunteers are very diverse: from students to people with rich managerial experience. No matter, young or experienced, they demonstrate such devotion you would never see at the normal workplace, at the paid jobs”.

Difficulties with finding an accomodation

There are also representatives from the coordination center of Ivano-Frankivsk City Council. This coordination center helps incomers with accommodation. They have information on which shelter can accommodate what number of people, could call for municipal buses that deliver people to the shelters. The shelters are mostly schools or student dormitories.

People who decided to stay in Ivano-Frankivsk try to find long-term accommodation. They don’t live in shelters for a long time but want to rent a flat, a house, or at least a room. However, in the second half of March, it has become extremely difficult.

According to duty men at the train station, most of the people see Ivano-Frankivsk as a temporary place. They go further abroad or to the less crowded towns. Often they go to the villages in the Carpathian Mountains where they could stay in hotels and guest houses.

The first-aid point at the station currently works day and night, and doctors from all medical institutions of Ivano-Frankivsk join the shifts there. The most frequent requests are blood pressure, heart problems, and panic attacks.

There is no psychological support point at the station, although it is highly needed. Natalia, one of the volunteers’ headquarter supervisors, says: “We had one case when a young couple arrived. They had to wait for the next train until 5 PM. The girl was very stressed, she was in constant nervous tension. So, one volunteer took them to her house. Generally, when we see a person is really unwell, we approach health care workers, and they call an ambulance”.

These days, the flow of people to Ivano-Frankivsk has lessened. In the first days of the war volunteers met a thousand people per night, now it’s around a hundred. Maria Keliy assumes they will soon give up on daily shifts and leave only night ones.

Although the number of displaced people decreased, people are constantly arriving in Ivano-Frankivsk and most probably will be coming in the following days. That’s why it is important that volunteer point will operate at the station constantly and reliably, as long as needed, and will provide hot meals and a night stay in relative safety. And more importantly, it will help people to feel they are not alone in this disaster and somebody is willing to support them.

Meanwhile, there are still problems of accommodation and settling in a new place. Employment, education, psychological and legal support will be covered in the following articles.